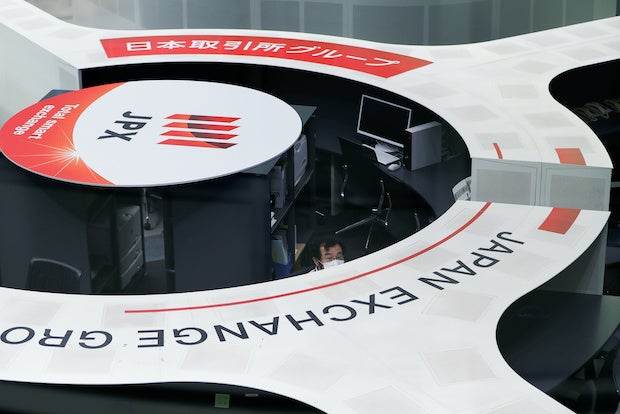 A staff member of the Tokyo Stock Exchange (TSE) is seen at the empty trading space in Tokyo, Japan Oct. 1, 2020. (REUTERS)

LONDON — Stocks and oil rose while bond yields eased on Wednesday as risk appetite returned, despite fears about rising cases of the Delta coronavirus variant worldwide and lingering concerns over inflation that had prompted an earlier flight to safety.

With a key European Central Bank meeting on Thursday expected to strike a dovish tone and provide a further boost, the benchmark STOXX index of the region’s 600 largest shares rose 0.2% and U.S. stocks looked positive with S&P 500 futures up 0.49%.

Having fallen to a five-month lows of -0.44% on Tuesday, Germany’s 10-year Bund yield traded 2 basis points higher on Wednesday at -0.40% as a sense of calm crept back into European markets.

“Markets have a tendency of doing that, but it’s dangerous to say it’s over for now until we see more of a stabilization.”

The dollar index turned negative on the day by 1400 GMT at 92.916 after touching 93.194, its highest since April, in early trading as the U.S. currency beat out gold as the safe-haven asset of choice.

Sterling meanwhile shrugged off Britain’s demand for a new deal from the European Union to govern post-Brexit trade with Northern Ireland, climbing 0.38% to $1.3678.

A slew of upbeat updates from European blue-chip firms strengthened the positive mood in stock markets, with travel and leisure stocks rallying 4% after getting hammered recently by worries about a resurgence in coronavirus cases.

As well as looking past those rising cases, investors seemed to ease on concerns that data last week showing a surge in U.S. consumer prices in June could prompt the Federal Reserve to bring a quicker end to emergency stimulus measures.

Gold likewise lost some of its recent safe-haven luster on Wednesday, with spot prices falling 0.4% by 1400 GMT as investors preferred the dollar.

The more positive mood in European shares on Wednesday contrasted with a 0.02% dip in MSCI’s broadest index of Asia-Pacific shares outside Japan, as South Korea reported a daily record of new infections.

“While some of the world is shrugging off rising infections as vaccination rates limit the severity of any symptoms of new cases, there are few parts of the world that can totally ignore this,” said Rob Carnell, Asia-Pacific chief economist at ING.