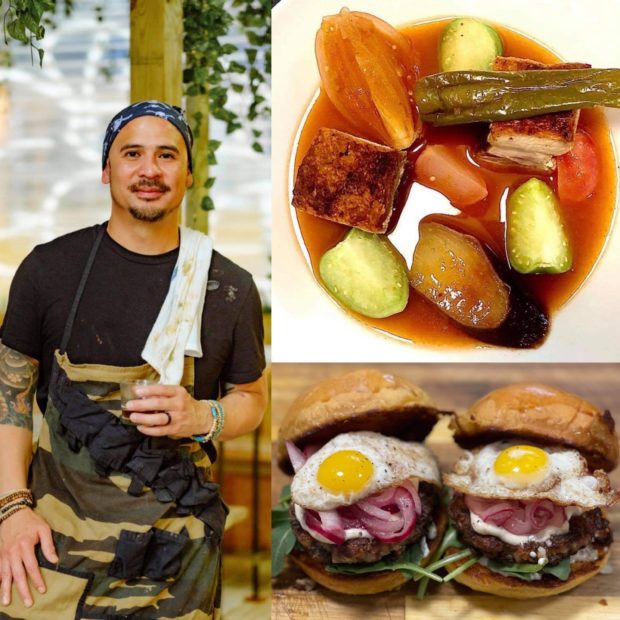 In May, New York (NYC) met its vaccine target and reopened. This means that many businesses, including restaurants, are now able to operate at 100-percent capacity. There has been a return to normalcy.

Restaurants are now able to operate as if in prepandemic times, with only one little compromise: that a 6-foot distance seating for individuals or groups be observed. You can practically live like a normal person again, without masks or face shields, and most of all, you can live without the fear of contamination or death lingering in the air.

With this, kitchen stars have an opportunity to rise again. And I am proud to share that one of them is Filipino.

Francis Balbarin, who once actually opened a burger business here in the Philippines, Burgers & Brewskies, is one of those stars.

Balbarin, known to friends as Kiko, is not a chef but he has always been passionate about cooking. I met him way back in 2004 when he was still working at Yura on Madison, known for its luxe deli food.

Friends in Manila had the privilege of trying his creations when he would come visit: burgers with blue cheese and Cuban corn inspired by the restaurant Cafe Habana on Prince St. in New York. This led to a partnership with a couple of Philippine-based friends to open Burgers & Brewskies, first in BGC and then a second branch in Estancia Mall.

In 2018, with the encouragement of friends, Balbarin took over the James and Daughters kitchen for a couple of days to showcase his cooking. He had certainly grown as a cook, with impeccable plating and a great understanding of ingredients and flavors, serving grilled octopus with arugula and patani, rib eye tartare with quail egg, barramundi ceviche using fresh lime juice and cilantro, squid ink pasta with taba ng talangka and seared duck breast with guava gastrique.

This time, he is doing a kitchen takeover in New York—at Tsismis, a hip Filipino-American restaurant on 143 Orchard in the Lower East Side. He will be presenting Filipino food, but with New York flair. Think of a fine dining restaurant in the city but using Filipino ingredients and flavors. This will be on Aug. 2 and 3, so if you are in the Big Apple, do support and head over.

Of course, as he was known for his burgers and corn at Burgers & Brewskies in Manila, he will be serving sliders. But here’s the twist: what he will serve in Tsismis will be made of sisig, hence called sisig sliders. The meat will be topped with a sunny side quail egg, pickled red onions, an aioli that uses siling labuyo and for a final touch of Pinoy, the bun that will be used is pandesal.

The grilled Cuban corn will be served with aligue and calamansi crema.

He will also serve bistek Tagalog but not as you know it. First, the dish will use hanger steak, known for its flavor. The beef will not be swimming in sauce and will be placed atop a bed of risotto made using glutinous rice (malagkit), with charred leeks and onions for a balance of acidity. Al dente malagkit, you ask? Count on Kiko to make it happen.

He will also serve his own version of sinigang. First, he makes bite-sized crispy belly confit. Then he pours in the sinigang broth made using watermelon and tomatillo, tamarind and lemongrass (yes, lemongrass). Alternatively, for those who do not eat pork, there will be a version using seared salmon.

This is a very interesting twist as sinigang does not usually come with crispy or seared meat but one can only imagine the heightened flavors that come with a confit and the added texture of the skin of a crispy pork belly. When this guy plays in the kitchen, it’s always all in.

He will also pay tribute to Ilonggos with his inasal, calling it “Not Your Mama’s Chicken Inasal.” He will sous vide chicken then pan sear it, basted with lots of butter, annato, a touch of calamansi juice, then served with a side of toyomansi gelee, a salsa of charred pineapple and cilantro, and in place of rice, tossed pomme frites.

He will also give a nod to Bicol with grilled sous vide pork belly binagoongan and fried eggplant logs served on a puree of—you wouldn’t believe this—Bicol express.

He will honor his wife’s Leyte roots with hatok. This is a specialty of Leyte that Francis learned about through his wife, makeup artist Mayone Bakunawa, known in Manila for being one of the best bridal makeup artists, but a revelation in the kitchen. She will be Balbarin’s “sous chef” at the pop-up.

Hatok is a Waray condiment based on the milky white extract (either milk or cream) of coconut meat. Mayone cooked the traditional hinatukang prawns for Francis at home, which gave him the idea for his version for Tsismis, which will use grilled prawns, sayote and kalabasa fondant, coconut creamed spinach and soft shell crab tempura. I am sure this will be a hit, especially for Filipinos who have not tried this Waray delicacy.

Being an award-winning bartender as well (Balbarin has his own label, 1919), he will also serve Manila-inspired drinks: “Manoy,” cheekily named after the late great Mr. Eddie Garcia, which has a Bourbon blend, Aperol, Aztec chocolate and aromatic bitters; Akuma, which means “devil” in Japanese, which has a Bourbon blend, hoji cha, angostura and blood orange bitters; and “Brekky” because the bourbon is bacon-infused with maple simple syrup and aromatic bitters.

This is one pop-up that makes me wish I was in New York right at this moment. If you know anyone in the area, start spreading the news. If you are in NYC, do drop by Tsismis and eat for me. INQ