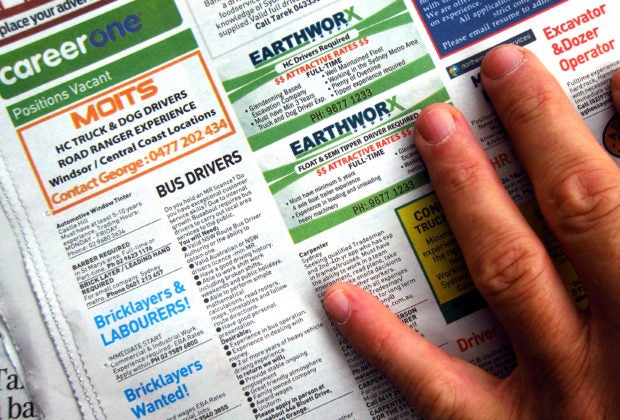 A man reads job adverts in a newspaper at a cafe in Sydney, Australia, May 9, 2016. REUTERS FILE PHOTO

SYDNEY — Australian job advertisements extended their record-breaking run in June as demand for labour remained strong despite a round of coronavirus lockdowns across the country, a sign any drag on the economy will likely be fleeting.

Other data out on Monday showed retail sales topped forecasts in May with a rise of 0.4%, while sales of new vehicles held firm in June, in a promising omen for consumption.

Approvals to build new homes did drop 7.1% in May from the previous month, but that followed months of gains which still left approvals up 53% on a year earlier.

Figures from Australia and New Zealand Banking Group showed job ads climbed 3.0% in June from May, when they jumped 6.8%. That was the 13th straight month of gains and showed 129% growth versus a year earlier when the labour market was recovering from a national pandemic lockdown.

“Recent history shows that workers laid off or stood down during lockdowns tend to be reinstated or find new jobs quickly once restrictions lift, given the underlying strength in the labour market and overall demand,” said ANZ senior economist Catherine Birch.

The survey came hot on the heels of government data on vacancies out last week which showed a huge 23% increase in the three months to May.

“Vacancies are twice their pre-pandemic level, and there are now 1.9 unemployed people per vacancy, easily the lowest ratio on record,” said Birch. “This suggests the unemployment rate has a lot further to fall.”

Unemployment has already fallen much quicker than policymakers expected and hit 5.1% in April, down from a pandemic peak of 7.5% reached in July last year.

The Reserve Bank of Australia is aiming to drive unemployment down to 4% or even lower in the hope of finally lifting wage growth and inflation after years of tepid gains.

The central bank holds its July policy meeting on Tuesday and the resilience of employment should provide the confidence to temper its massive stimulus program.

Analysts expect it will not extend its three-year yield target to late 2024 but will announce another round of bond buying, perhaps in a more flexible manner.