Re-establishing the urban commons in the City of Tabaco 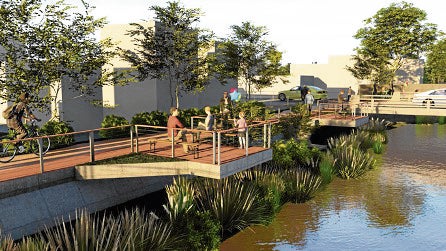 How do you activate the urban commons in a town where public assets are scarce?

In early 2020, a team of 14 volunteers embarked on a year-long effort to explore possibilities for placemaking for the City of Tabaco, Albay. Working with Mayor Krisel Lagman-Luistro and city officials, the team explored solutions using a largely untapped spatial approach in the planning of cities. In this concluding piece to the series on Shared Cities, Architect Karl Bautista, one of the volunteers, shared the team’s experience of placemaking in the City of Tabaco:

Tabaco, Albay, is a city that has retained the charm of a small town. It is a city that remains largely agrarian and artisanal with local crafts like tabak-making (blade smithing) and abaca weaving, and where moving around is mostly by padyak or pedicab. Its downtown consists mostly of homegrown enterprises, but also has limited physical public assets other than the City Hall, the plaza and the historic cathedral which anchors the center of the city.

Tabaco City, located at the foot slopes of Mayon Volcano and along the Pacific coast, is also vulnerable to various types of natural disasters, the most recent of which was the series of typhoons in late 2020 which devastated the city in the midst of an ongoing pandemic. These form the context on which a place-based development for Tabaco was conceived.

Placemaking is an approach to define, design and manage the public realm in a locality. In Tabaco, the team looked into the community’s existing physical assets: streets, markets, vacant land, coasts and waterways—harnessing latent opportunities of these untapped sites and re-forming them as part of the public realm to strengthen the community through enhancement of place.

Working with the city government, the team of volunteers studied the landscape of Tabaco and strategized how to enable a place-based economic development approach for the city.

A system of links and nodes was conceptualized for the site, tying different key locations within the city into a network of distributed but interconnected system of natural and built settings. The team categorized the city into different nodes which then was linked to each other via existing streets.

A city’s public realm can include formal open spaces as well as streets, vacant lots, coastlines and residual spaces. —CONCEPT BY MEA DALUMPINES

The Civic core—the center of Tabaco city where the plaza, city hall, and church are located—acts as the heart of downtown where the community has already established a sense of place. Branching out from the Civic Core, the main avenues of Ziga and Rizal Streets formed the major links to edges of downtown, the pier and coastal areas as well as the rivers at the edge of town, connecting the scattered, underdeveloped areas around the city via green and blue corridors that linked the nodes.

Rivers along the northern and southern edges of downtown Tabaco City were conceived as more than drainage systems and were envisioned to contain pocket parks and walking and biking trails accessible to everyone. Discovered assets such as the mangrove area opened opportunities for nature-oriented places.

City streets were reimagined as shared spaces—enhanced by public art, trees and commercial activity—that prioritize people over cars, meaning places to go to and not just through. The intent is to create a more pedestrian-friendly Tabaco that encourages people to walk and bike around the city, building on and taking pride in the city’s reputation as the “Padyak Capital of the Philippines.”

Placemaking can also form the backbone for resiliency against disasters. Tabaco will need to rely on the same community structure that enabled the city to rebound from numerous calamities in the past. Community engagement, which is critical to placemaking is also essential to resiliency. The various nodes and links were envisioned to be multi-functional—serving as refuge shelters and disaster response hubs and they strengthen social ties that are necessary to weather crises. 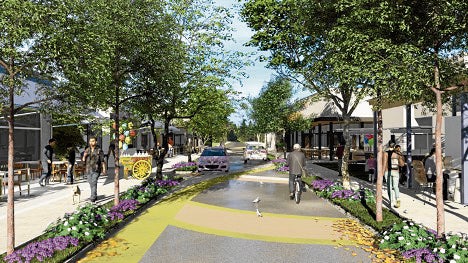 Streets are for people. Rizal Street after placemaking interventions.—
CONCEPT BY ARIEL RAQUITICO AND JULES ROLDAN

Placemaking through nodes and links can allow Tabaco to have a more organized sense of place, where underutilized assets are tapped to strengthen community bonds and foster investment in location without losing cultural identity and local charm. To implement these strategies, an incremental, light-handed process is proposed, one that focuses on testing, iterating and participation in the implementation of ideas and programs.

The more profound impact that placemaking strategies hope to achieve is one of engaging the collective spirit for mutual resiliency and prosperity. It is about establishing an urban commons even in a context where traditional open spaces and civic facilities are lacking.The effort recognizes that Tabaco is rich in assets that can be harnessed and mobilized by the community—streets, coastlines, the existing pier, mangroves, vacant land. All these are part of the public realm and of the urban commons that can be used for multiple activities in a way that can synergize towards achieving and multiplying long term benefits for its citizens. In the end, the most important asset of Tabaco is its community—leveraging this to attain broader goals of inclusive prosperity and collective growth.

It is hoped that through the effort, the intrinsic sense of community imbedded in the culture of Tabaco can be further awakened and harnessed towards improving the livability, resiliency and the physical environment of the city and imbue its citizens with an enduring pride of place.

The author is founder and principal of JLPD, a master planning and property development consulting firm, www.jlpdstudio.com