Aquino, agriculture and the private sector 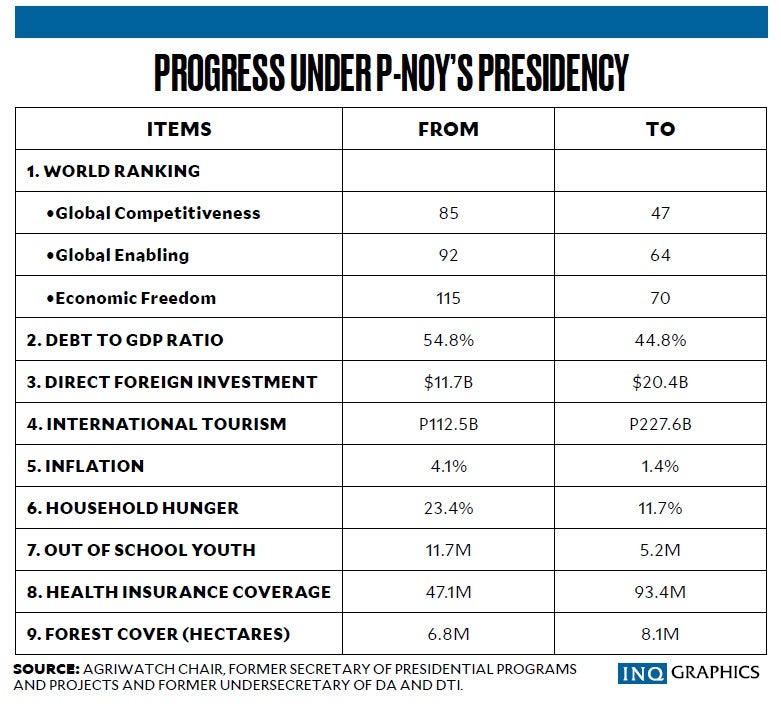 On his first day in office, President Noynoy Aquino (P-Noy) told the private sector: “Kayo ang boss ko.” His administration then achieved the highest ever average annual gross domestic product growth rate of 6.2 percent, and made game-changing records in areas that indirectly benefited agriculture (see Table). But the 3- to 4-percent agriculture growth target was missed.

Though P-Noy tried to change decades-long agriculture problems with more private sector involvement, this did not sufficiently take place. We must use his private participation legacy more effectively now to achieve the elusive agriculture development goal.

P-Noy showed his agriculture commitment in many ways: the DA budget he provided was equal to the entire combined budgets of the Arroyo, Estrada and Ramos administrations; rice farmers’ income rose from P15,830 a hectare to P21,910, while that of corn farmers grew from P5,760 to P9,537; production of high value crops rose by 28 percent from P900 billion to P1.3 trillion, and fisheries exports doubled from $634M to $1.156 billion.

Because of damaging corruption reports, P-Noy separated four critical groups (the National Irrigation Administration, National Food Authority, Philippine Coconut Authority and Fertilizer and Pesticide Authority) from the Department of Agriculture and placed them under then Presidential Assistant for Food Security and Agriculture Modernization Francis Pangilinan, who instituted the needed reforms. But this disruption and the lack of private sector participation caused his administration to miss the agriculture growth target.

From actual experience, I can say how P-Noy’s support for private sector involvement was a key factor in several of his successes. I was the private sector anti-smuggling committee co-chair in his public-private National Competitiveness Council. With this position, I was encouraged to help direct the committee composed of senior officials from the Department of Trade and Industry, Agriculture, Justice and Finance. By overseeing Bureau of Customs activities and accessing information not generally given to the private sector, we ensured transparency through cogovernance and successfully cut smuggling rate by more than 20 percent.

Unfortunately, after P-Noy left, the committee was disbanded, access to this information denied, and the smuggling watch stopped. I later co-signed a memo of agreement with BOC Deputy Commissioner Philip Lachica for this information access to continue, but he was murdered two days later. Private sector participation should be restored now, since smuggling usually increases when elections are near. Agriculture smuggling must stop because it is causing job losses and increased poverty.

The other task P-Noy gave me was to help in the tail-end of a project to address a port congestion problem that was causing billions of pesos in losses. Since I had worked on the same issue under former President Ramos, I was asked to help in the negotiations with then Manila Mayor Joseph Estrada. The goal was to convince Estrada to lift the truck ban so free flow of goods could resume.

P-Noy gave me the authority to be the main negotiator with Estrada. This was possible because the mayor was reluctant to deal with the government that had just put his son in jail for alleged plunder. Estrada knew me personally because of my previous government role and my having produced “Saranggola,” the official Philippine film entry to the Academy Awards, which he keenly followed. Together with Estrada’s real estate broker Elsie Chua, we succeeded in this negotiation and the truck ban was soon lifted. This would not have happened if P-Noy did not fully believe in the private sector as a partner in governance.

It is now up to us to live P-Noy’s legacy of more private sector involvement and participation, especially in agriculture. If so, then the last year of this administration will see the transformation President Duterte announced in the May 18-19 National Food Security. We hope this rhetoric becomes reality, because it is time agriculture gets a more responsive and responsible reality that we lack and badly need today. INQ