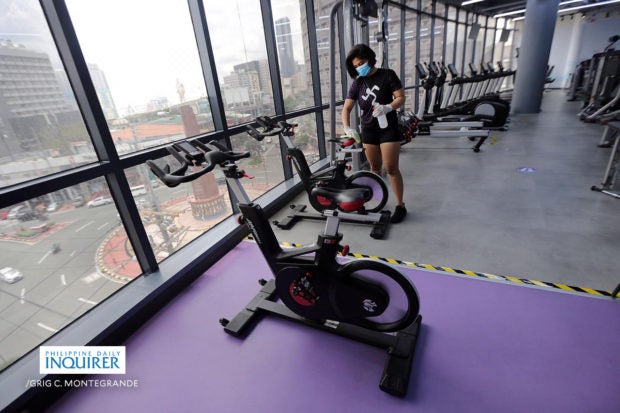 Gyms and fitness centers in Metro Manila, Bulacan and Rizal can now accommodate up to nearly half of their operating capacities as the government further eased business restrictions despite COVID-19 cases still increasing.

The Department of Trade and Industry (DTI) released on Thursday an advisory raising gyms’ and fitness centers’ permitted capacity to 40 percent, or twice what was allowed for the sector two weeks ago.

Moreover, any business establishment that was awarded a Safety Seal Certification Program could have another 10 percentage points added to its allowable capacity, the DTI said. A safety seal is supposed to attest that the establishment is compliant with minimum public health standards and that it uses contact tracing via StaySafe.ph.

Other provinces in the National Capital Region (NCR) Plus may have to wait a little longer. In Laguna and Cavite, for example, some businesses like gyms are still not allowed to open.

According to presidential spokesperson Harry Roque, the two areas are under general community quarantine (GCQ) “with heightened restrictions” while others in the NCR Plus are also under GCQ albeit only “with some restrictions.”

As the government continues to further open the economy, the country’s COVID-19 positivity rate—an important metric used by experts in determining if an outbreak is under control—remains far from ideal.