Cheered on by his kids, TG Limcaoco takes over as CEO of oldest bank in Southeast Asia
By: Doris Dumlao-Abadilla - Reporter / @philbizwatcher
Philippine Daily Inquirer / 05:20 AM June 20, 2021 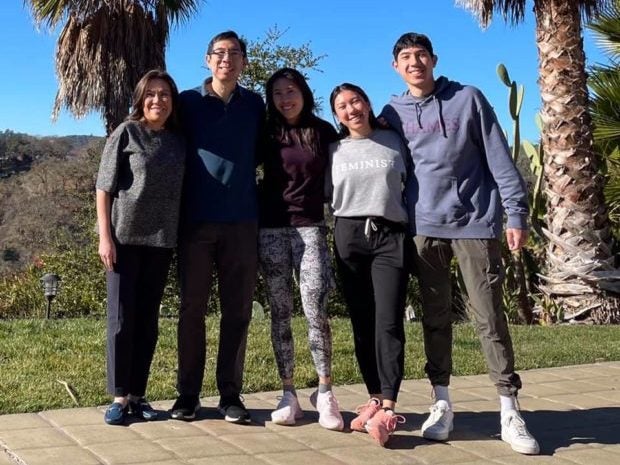 FAMILY MAN TG Limcaoco is happiest when he’s with his wife and kids. —CONTRIBUTED PHOTOS

As early as 12 years old, Jose Teodoro “TG” Limcaoco already knew he would be a banker someday. His late father, Felix, a businessman, introduced to him the concept of interest at a tender age, turning him into a precocious de facto fund manager.

He would give all his cash savings to his father, who in turn paid him interest for as long as he could calculate the interest himself. He later on coaxed his baby sister, Kat, to give him all her money, which he would also “lend” to their father, while he kept a certain margin.

“She hates me for that because for four years, I took her money and just placed it with my dad and made a little [margin] off her,” Limcaoco says in jest. “I calculated everything for her and kept her records for her.”

When going to his first bank to deposit cash, he loved holding the passbook and tracking how much incremental money his savings made.

A mathematician at heart, banking, after all, is in his DNA. His grandfather and eldest uncle founded two banks—the forerunner of Pilipinas Bank and Luzon Development Bank.

His father felt that he should not join the family business from day one and encouraged him to gain professional experience elsewhere. He ended up enjoying work outside the family sphere, discovering that working as a professional—especially for a storied institution like the Bank of the Philippine Islands (BPI)—is just as meaningful.

Now, Limcaoco himself is a father of three but an empty nester as his kids have all grown up—aged 21 to 30 and all based in the United States. Nonetheless, his family is number one in his book and he doesn’t mind sharing the same family-first mindset with his people.

“I think in the end, your passion is really what you live life for, right? And I’ve always felt that the one mission of people in their lives is to take care of their families. I hold that very true and very dear.”

As he started his new role as BPI’s president and CEO, his confidence is further strengthened by the full support of his wife and kids. As his kids said, “Papa, you’ve finally gotten your dream job.”

With a “dynamic CEO” like Limcaoco at the helm — one who is eager to increase digitalization, reposition the loan portfolio and leverage cross-selling — a recent research from CLSA projected that BPI could grow its earnings by an average of 23 percent from 2021 to 2030 and achieve an 11.6-percent return on equity by 2023.

Having done the rounds of various businesses within the Ayala group, CLSA noted that Limcaoco has dealt with a lot of foreign and local banks and seen what works and what does not work in the marketplace. CLSA said this would allow him to spot emerging trends not only in the banking space but also in other business lines like property, telecom, utilities, health care and education.

Limcaoco finished his primary and secondary education at Ateneo de Manila University, after which he enrolled at the University of the Philippines (UP) to major in business administration. After two years in UP, he was accepted as a transfer student in Stanford University, where he graduated with a BS Mathematical Sciences degree (honors program) in 1984.

The first job he took on was as a computer programmer at a firm called VLSI in Silicon Valley. He’s no stranger to programming as he taught himself such skills back in his high school days, learning from books and thanks to a micro-computer bought by his father back in 1978 when computers were not yet ubiquitous.

After two years of working in Silicon Valley, he enrolled at Wharton for his MBA. From his first year of graduate school, he was enlisted by JP Morgan’s derivative trading desk during the summer. He was able to fix a big problem at the trading desk then—details of which he couldn’t divulge as it’s confidential. At that time, he would fly to New York every Friday to work at JP Morgan. 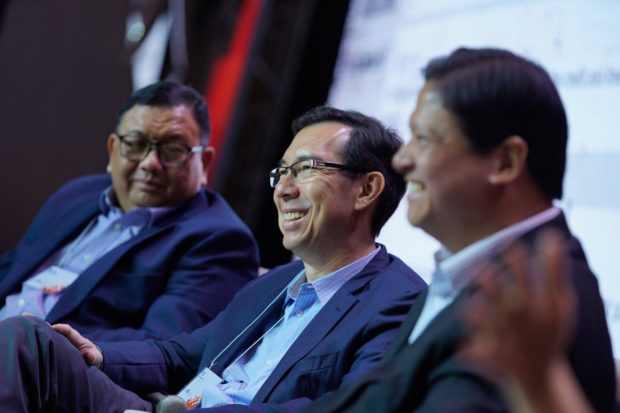 NEW CHAPTER Investors are optimistic about TG Limcaoco (center) and his plans for BPI.

When he decided to come home in 1989, a mentor at JP Morgan took him aside and told him there’s only one bank in the Philippines that he must work for — BPI. So he indeed worked at BPI, starting at the corporate finance unit for three years, after which he rejoined JP Morgan to run the derivatives business out of Singapore. After three years, he returned home to rejoin BPI as treasurer of investment banking arm BPI Capital and briefly heading stock brokerage BPI Securities.

After two years at BPI Capital, he was hired by Barclays Bank to head its local brokerage arm BZW Securities. This was back in April 1997, three months after which, the Asian currency turmoil struck. By November, Barclays decided to shut down this unit.

While unwinding BZW, Manny Bengzon and Fernando Zobel de Ayala reached out to Limcaoco and invited him back. But since it’s his third time to join, they added: “If you leave us again, we’ll never take you back.”

He rejoined Ayala group for the third time in 1998, first working with Bengzon at the treasury and handling tech initiatives such as myAyala, Sureseats and iAyala. When the dotcom bubble burst in 2000, he moved to AC Capital as CFO, while overseeing the electronics manufacturing business under IMI and water concessionaire Manila Water.

He was summoned back to parent firm Ayala Corp. in 2015, where he served as CFO before assuming the post of BPI CEO effective April 22, 2021.

All told, he likes working with the Ayala group largely because he’s surrounded by “extremely smart” and “opinionated” peers.

“What I do like about the group is that as leaders, we are given pretty much free rein by Jaime and Fernando [Zobel de Ayala], so you can run a business. And it’s a very open atmosphere. People speak very openly within the group,” he says.

According to the CLSA research written by head of research Alfred Dy, Limcaoco’s strategy at BPI is pretty “solid,” summarized as follows:

Leverage BPI’s brand name to the hilt given that it remains one of the most- trusted brands in the country;

Sell some of its bad loans to third-party asset management companies via the Financial Institutions Strategic Transfer law, which offers tax breaks from the sale of bad assets;

Continue digitalization initiatives via spending around 7 percent of revenues in technology and look for ways to tie up with other platforms;

Keep an eye on developments on fintech and seize opportunities as they come by; and,

Cross-sell within the BPI and Ayala ecosystems, thereby opening up other business opportunities in the areas of consumer lending, small and medium enterprise loans and fee-based income.

“As you get older and hopefully wiser, you begin to see what the effect of organization can have on society. For example, when I was very young, the mission was to do this or that deal because it helps the company. But today, it’s really about helping everyone understand financial awareness or putting financial knowledge so people are better prepared,” Limcaoco says in an interview with the Inquirer.

“It’s not about making a loan anymore or selling the product. It’s making sure people truly understand and that comes with maturity and age. Don’t look at it as a transaction but as to what is it delivering to people in the end.”

In this era of cutthroat competition and heavy regulation within the banking space, Limcaoco intends to move faster in encouraging innovation. He wants to see his people thinking outside the box and taking calculated risks.

“We don’t know what a bank will look like five years from now or what the definition of the bank will be. What we do know is that people will continue to need services to meet their financial needs and financial needs could be savings, capital, ease of payments, easier lifestyle. It’s all those things.

“And my vision of a BPI is an institution, call it a bank, that provides all these needs in a leadership role — meaning we’re the best in all these services. The way I view it,  the only way to do that is to offer a digital platform that’s available to all — not just top clients, big corporates, private banking clients. It has to be for everyone. In five years, that’s going to be key.”