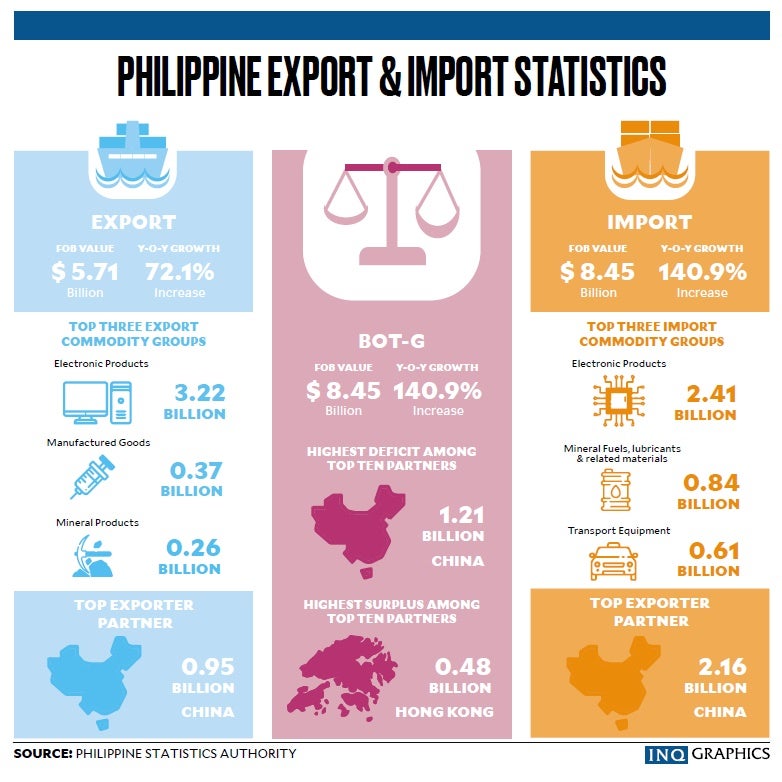 Total merchandise trade between the Philippines and the rest of the world more than doubled in April to $14.16 billion from a year ago, with both exports and imports posting substantial growth.

Latest data from the Philippine Statistics Authority (PSA) showed that total external trade jumped 107.5 percent in April from $6.83 billion in the same month last year. Combined exports and imports slid by 54.8 percent year-on-year in April 2020 due to the stringent quarantine measures imposed at the start of the corona virus (COVID-19) pandemic.

In April this year, exports grew by 72.1 percent year-on-year, while imports jumped by 140.9 percent.

To recall, countries around the world shut their borders at the onset of the pandemic, weakening global trade. Locally, manufacturers and consumers were placed under the strictest movement restrictions which stopped 75 percent of the economy from mid-March to May last year, also affecting export and import operations.

The 72.1-percent increase in exports last April to $5.71 billion from $3.21 billion a year ago, reversed the 41.3-percent decline at the height of last year’s enhanced community quarantine (ECQ).

In a statement, Trade and Industry Secretary Ramon Lopez said the latest exports data showed that the country was steadily recovering from the negative impact of COVID-19, considering that the numbers were better than prepandemic levels.

This, he said, was the highest among select Asian economies surpassing even that of Japan’s 38 percent and China’s 32.3 percent.

He said this was helped by the government having allowed full operating capacity of exporters even during the ECQ and the gradual economic recovery of the country’s major trading partners from the pandemic.

In a report, ING’s senior Philippine economist Nicholas Mapa attributed the export gains to the resumption of regional manufacturing operations.

“Imports were up across all subsectors with capital goods, raw materials, fuel and consumer imports all posting triple-digit gains,” Mapa noted.

Lopez said the year-on-year doubling in imports of manufacturing inputs such as raw materials and intermediate goods (118.6 percent) and capital goods (104.8 percent) signaled that local manufacturing was ramping up.

Total foreign trade last April was, however, lower than the $16.29 billion in March, as the National Capital Region Plus—which accounted for half of the economy—reverted to stricter lockdown measures during the month.

“April trade data suggests that lockdowns hindered both inbound and outbound shipments and we can expect a sustained pickup for both exports and imports in the near term as mobility curbs are relaxed,” Mapa said.

Last Tuesday, Department of Finance Undersecretary and chief economist Gil Beltran said “the continued rebound in merchandise trade and indications of expansion in manufacturing activities signify that the green shoots of economic recovery are growing, albeit precariously, given the downside risks posed by [COVID-19] virus and the uncertainties of its variants.”

The PSA earlier reported that the volume of production index—a proxy for factory output—also reverted to a growth of 162.1 percent year-on-year in April.

“Managing the spread of the virus and its risks, either through pharmaceutical and nonpharmaceutical interventions, will be key in restoring and maintaining the growth of economic activities,” Beltran said.

The Development Budget Coordination Committee expects goods exports to grow 8 percent this year, while imports were projected to rise by 12 percent. INQ