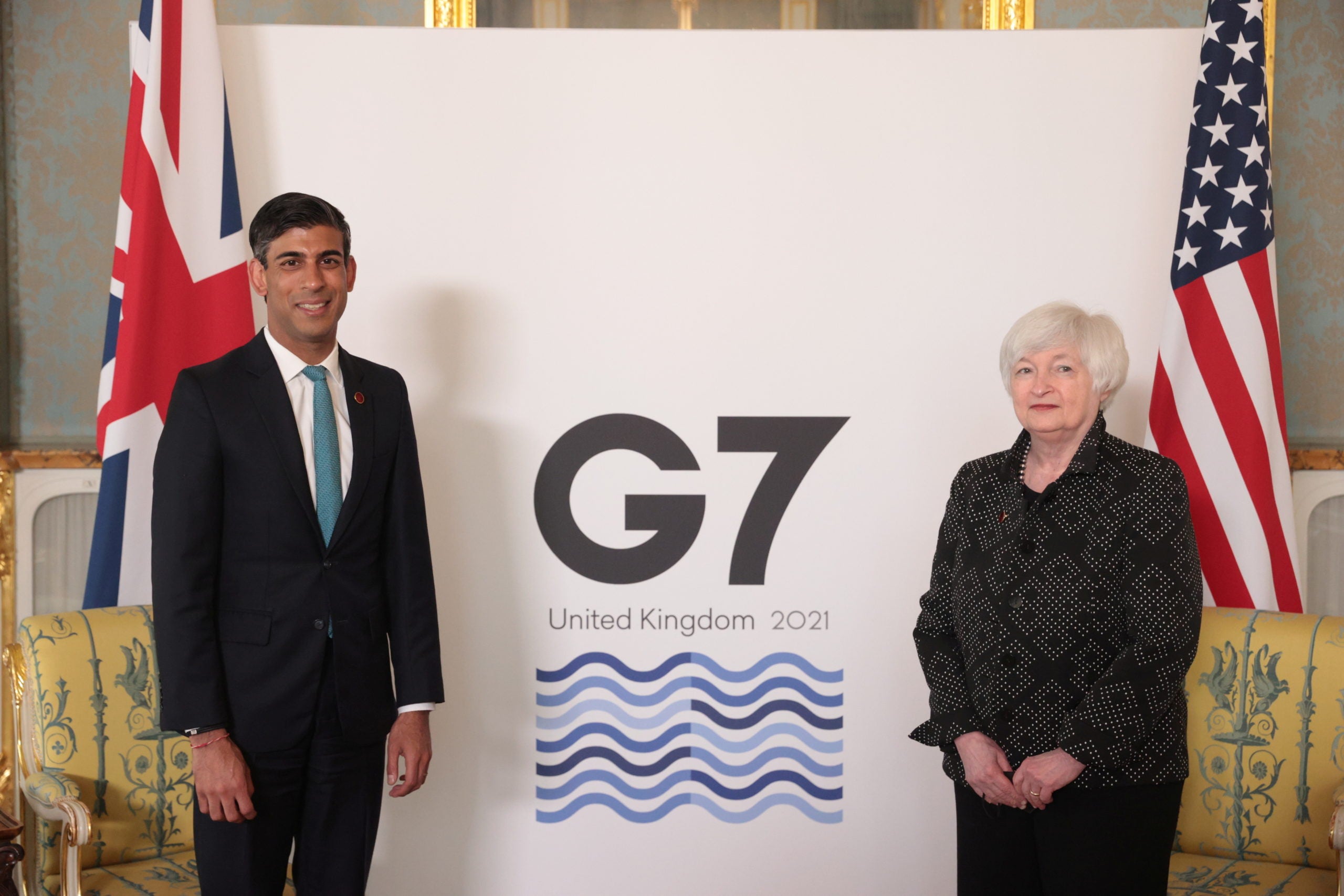 LONDON — Finance ministers from the G7 group of rich nations are meeting in London on Friday for two days of talks aimed at moving closer to a global deal to raise more tax from the likes of Google, Facebook, and Amazon.

The gathering, chaired by British finance minister Rishi Sunak, is the first time the ministers have met face-to-face since the start of the coronavirus pandemic.

Rich nations have struggled for years to agree on a way to raise more tax from large multinational companies, which often book profits in jurisdictions where they pay little or no tax.

“I believe we can make significant progress in tackling some of the world’s most pressing economic challenges,” Sunak told reporters on Friday shortly before the meeting began.

Sunak stressed the importance of his fellow ministers from the United States, Japan, Germany, France, Italy, and Canada being able to meet face-to-face in Lancaster House, an ornate 19th-century mansion almost next door to Buckingham Palace.

“You need to be around a table, openly, candidly talking through things,” Sunak told Reuters in an interview this week.

Due to COVID restrictions, ministerial delegations have been cut down and there are few traveling journalists. Seating plans have been redesigned with the help of public health officials, and Sunak greeted leaders by bumping elbows, not shaking hands.

But the bigger challenge remains reaching an agreement on tax reform which could then be presented to a broader group of countries, the G20, at a summit in Venice in July.

In a joint letter on Friday, finance ministers from Germany, France and Italy wrote that they would “commit to defining a common position on a new international tax system at the G7 Finance Ministers meeting in London”.

“We are confident it will create the momentum needed to reach a global agreement,” they added. Spain signed the letter too.

However, Japanese finance minister Taro Aso said on Monday that he did not expect agreement this week on a specific minimum tax rate.

The U.S. Treasury expects a fuller agreement to come when Biden and other heads of government meet at a secluded beach resort in southwest England on June 11-13.

The United States has proposed a minimum global corporate tax rate of at least 15%. If a company paid tax somewhere with a lower rate, it would probably have to pay top-up taxes.

Biden had been planning to raise the U.S. domestic corporate tax rate to as high as 28%. But on Thursday he proposed a tax floor of 15% in a bid to gain support from Republicans for new spending measures.

But just as important for Britain and many other countries is that companies pay more tax where they make their sales — not just where they book profits or locate their headquarters.

The United States wants an end to the digital services taxes which Britain, France, and Italy have levied, and which it views as unfairly targeting U.S. tech giants for tax practices that European companies also use.

British, Italian, and Spanish fashion and luxury goods exports to the United States will be among those facing new 25% tariffs later this year if there is no compromise.

The United States has proposed levying the new global minimum tax only on the world’s 100 largest and most profitable companies.

Britain, Germany, and France are open to this approach but want to ensure companies such as Amazon – which has lower profit margins than other tech firms – do not escape the net.

“All of them, and without exception” must be covered by the new rules, German finance minister Olaf Scholz told Reuters.

Daniel Bunn, an expert on global taxation at Washington’s Tax Foundation think tank, said this was likely to lead to more complex regulation.

“A lot of those rules are going to be, I think, politically based rather than principles-based,” he said.