To bounce back from the pandemic, enterprises need to invest in new tools
By: Linda B. Bolido - @inquirerdotnet
Philippine Daily Inquirer / 03:57 AM May 24, 2021 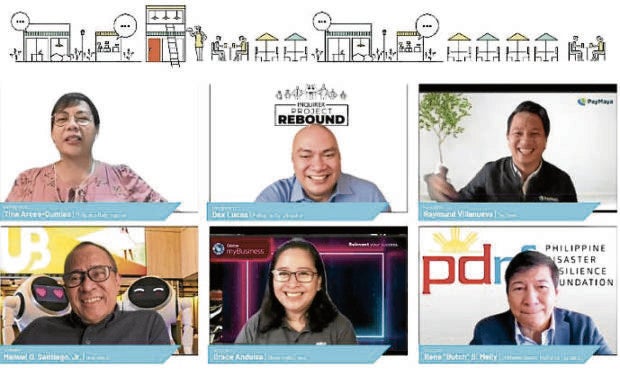 Inquirer group hosts insightful webinar on how private firms are helping MSMEs cope with the pandemic.

Accounting for the majority of the total businesses in the country and generating more than half of the country’s total employment before the COVID-19 pandemic hit in March of last year, the health of micro, small and medium enterprises (MSMEs) is as much a concern for the Philippines as the physical well-being of its population.

In 2018, statistics from the Department of Trade and Industry (DTI) based on surveys by the Philippine Statistics Authority showed that MSMEs accounted for 99.52 percent, or 998,342, of the total 1.003 million businesses in the Philippines. They generated 5.714 million jobs, or more than half—63.19 percent—of the country’s total employment.

The DTI said, “In terms of value added, the MSME sector contributed 35.7 percent of the total with manufacturing contributing the largest share at 6.87 percent.”

How this vital sector of the Philippine economy could bounce back after a year of the pandemic was discussed at the latest webinar under Inquirer Project Rebound, with the theme, “Back in Business: Finding New Growth Opportunities and Strategies for MSMEs.”

Panelists in the webinar said, like big businesses trying to regain their positions, MSMEs would also have to look to advances in digital technology to recover, like setting up an online presence and enabling cashless payment.

Although the Philippines’ economic recovery slowed because of the recent hard lockdowns in Metro Manila, Manuel Santiago Jr., chief mass market and financial inclusion executive of UnionBank of the Philippines, said “MSMEs did not have to wait for full recovery to transform their businesses.”

They could start preparing their businesses for full recovery now and be ready for the return to normalcy possibly toward the end of the year. The DTI reported that close to half a million MSMEs stopped operations at the height of the pandemic last year.

Rene Meily, president of the Philippine Disaster Resilience Foundation, stressed during the webinar, moderated by Tina Arceo-Dumlao and Daxim Lucas of the Business Section, the need for flexibility. MSMEs could start doing business online and enable cashless payment but also adapt to new ways of dealing with consumers that would combine in-person and digital interactions.

Euromonitor International’s recent “Top 10 Global Consumer Trands 2021 labeled this new interactions “phygital reality, ” a collision of physical and digital worlds, as a result of the pandemic.

MSMEs had to change their mindset, said Raymund Villanueva, director and head of enterprise growth of PayMaya, who noted that “some people were still reluctant to spend on digital infrastructure.” Expecting that people would move out of Metro Manila as new work arrangements were adopted, he said MSMEs “could create their own e-commerce shops and take advantage of increased use of digital tools.”

Grace Anduiza, head of customer success of Globe myBusiness, said MSMEs had demonstrated agility, grit and diskarte (roughly translated, smarts) but the way forward would be digitization. She said because of digitization even some of their employees had set up their own MSMEs.

People were “moving into a different world,” said Meily, as work-from-home became common. Many were also moving out of urban centers. MSMEs could respond to the needs of these consumers.

The demand for delivery and courier services outside Metro Manila, for instance, could arise as people left the cities and consumer behavior changed, Santiago said.

Villanueva said digital should become the “default” setting in doing business, while Anduiza noted an increasing willingness by consumers to shift to digital transactions.

All the panelists agreed MSMEs should start moving their businesses online, exclusively or in combination with in-person transactions, to hasten their recovery and ensure their survival. INQ