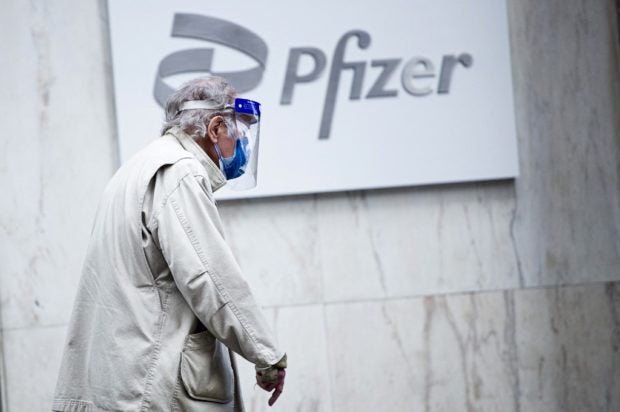 In this file photo a man wearing facemask and shield walks past the Pfizer headquarters in New York on March 11, 2021, one year after the pandemic was officially declared. Pfizer sharply increased its projections for 2021 revenues and profits on May 4, 2021, citing much higher sales from its Covid-19 vaccine sales. Photo by Kena Betancur / AFP

NEW YORK — Pfizer sharply increased its 2021 profit projections on Tuesday, citing much higher Covid-19 vaccine sales which are on track to provide a “durable” revenue stream in the wake of the pandemic.

The drugmaker reported a jump in first-quarter profits based on surging revenues, with nearly one-fourth of sales coming from Covid-19 vaccines.

With German partner BioNTech, the pharma giant is ramping up vaccine production and now estimates 2021 revenues of $26 billion from the vaccine, up from the $15 billion projected in February.

But the surging profits have drawn criticism as governments face pressure to step in to ensure vaccines are provided to underserved countries.

Pfizer, which says it is on the cusp of winning US approval for individuals 12 to 15 years old to receive its vaccine, is holding talks with “basically all governments of the world” about providing booster shots through 2024, Chief Executive Albert Bourla told analysts on a conference call Tuesday.

The company is studying the efficacy of giving the jabs six or more months after the second vaccine dose, and developing doses that could be stored at standard refrigerated temperature for up to 10 weeks.

Bourla expects “durable demand” for Covid-19 vaccines, similar to that of the flu vaccine.

“It is our hope that the Pfizer-BioNTech vaccine will continue to have a global impact by helping to get the devastating pandemic under control and helping economies around the world not only open, but stay open,” Bourla said in prepared remarks.

That would create “a scenario in which Pfizer can continue to be both a leader and a beneficiary,” he said.

Pfizer has won wide praise for its technological prowess in developing a game-changing vaccine in record time. However, critics called the profits troubling given the divide in vaccine availability between rich and poor countries.

World Health Organization chief Tedros Adhanom Ghebreyesus last month decried a “shocking imbalance in the global distribution of vaccines” and called for efforts to fortify the WHO’s Covax programs, which aims to ensure that poorer nations can access the shots.

India and South Africa are leading an effort in the World Trade Organization to waive intellectual property and patent rules, at least temporarily, which would open the door to broader production of vaccines at a time when the virus is causing mass misery in India and some other countries.

President Joe Biden said Tuesday he had not made a decision on whether to support a vaccine waiver, but that the United States was moving “as quickly as we can” to export doses.

Biden also said he was ready to “immediately” begin vaccinations for 12 to 15-year-olds as soon as Pfizer’s Covid shot is approved by regulators for the age group.

Pfizer reported net income of $4.9 billion, up 45 percent from the same period of the prior year.

The results include the lift from Covid-19 vaccines, which generated profit margins of “high-20s,” implying around $900 million in profits in the most recent quarter.

As of May 3, Pfizer and BioNTech have shipped about 430 million doses of the vaccine to 91 countries around the world.

The company has reached an agreement to provide up to 40 million doses for Covax, a globally-pooled coronavirus vaccine procurement effort aimed at providing vaccines to low- and middle-income economies.

However, the company on Tuesday pointed to a series of deals to expand offerings in richer countries, including the United States, the European Union, Canada and Israel.

Pfizer has defended its approach to vaccine pricing, saying it has moderated pricing through a “pandemic phase” that could last into 2022 at levels “to encourage broad access.”

The company said it is charging $19.50 per vaccine dose in the United States, but has not disclosed its US profit margin.

“Pfizer is cashing in on the crisis and hoarding technology, even as billions of people around the world go without a vaccine,” Rizvi said in an email to AFP.

“Pfizer’s profiteering shows the urgent need for governments to step-in. Governments should require Pfizer to share technology with manufacturers around the world to help ramp up global production.”