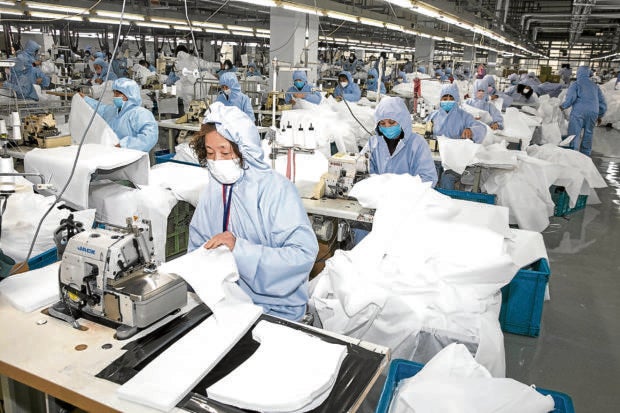 PREFERRED SOURCE Local garments manufacturers say they are hurting because of the Department of Health’s preference for imported personal protective equipment (PPE) mostly from China. Photo taken in February 2020 shows a PPE factory in Wuxi in the eastern Chinese province Jiangsu. —AFP

MANILA, Philippines — The local garment industry lost more than 25,000 jobs, including 3,500 from just three factories that were shuttered due to the government’s purchases of personal protective equipment (PPE) from other countries, industry players told the Senate on Wednesday.

They said the preference of the Department of Health (DOH) for imported PPE, mostly from China, had elbowed out local manufacturers whom the government had asked to repurpose their factories last year for the anticipated demand for PPE during the pandemic.

The manufacturers’ claims prompted Sen. Aquilino Pimentel III, chair of the Senate committee on trade, to call for an investigation of the alleged preference for foreign-made PPE.

“I think it’s unfair because although it would have saved jobs by telling factories to repurpose, and yet at the same time [the government] disappoints them by not buying their output, their produce,” Pimentel said at a Senate public hearing to assess ongoing government programs intended to help industries hardest hit by the COVID-19 pandemic.

Among those who suffered heavily were the garment makers, some of whom were asked by the government to repurpose their factories to produce PPE when the death toll among front-line health workers began to rise in the early months of the pandemic.

Maria Teresita Jocson Agoncillo, executive director of the Confederation of Wearable Exporters of the Philippines (Conwep), said the garment sector retrenched about 25,400 of a total of 120,000 workers from June to December 2020 due to the economic downturn caused by the pandemic.

Of the 25,400 garment factory workers who lost their jobs, 3,500 were from three companies that repurposed their factories for PPE production, Agoncillo said.

Other companies managed to retain their workers when PPE orders from the government began to arrive in January this year, she said.

Rosette Carillo, associate director of the Confederation of Garments Exporters of the Philippines, said her group was called in by the government last year to help fill up the dire need for medical-grade PPE.

In response, a group of five major companies formed the Coalition of Philippine Manufacturers of PPE in July, and invested about $35 million (P1.7 billion) to produce medical-grade PPE, Carillo said.

She said three major manufacturers and exporters of global brands in their group agreed to convert to manufacturing PPE, face masks and other medical gear amid the looming threat of business closures due to the pandemic.

But because the government bought PPE based on the lowest cost, local manufacturers lost out to foreign competitors that offered lower-priced PPE, Carillo said.

“Unfortunately, also at the same time, the Philippine market was flooded with very low-cost PPE from China, some of them are even substandard,” she said.

Local PPE manufacturers urged the Senate to tackle the four “pandemic bills” pending in the committee on health, which mandates the government to prioritize locally produced PPE.

They also called for Congress’ support to proposals for the government to stockpile PPE to ensure a ready supply in the event that another health crisis breaks out.

Pimentel lamented the government’s use of funds from foreign borrowings to pay foreign manufacturers to the detriment of the local industry in the middle of a pandemic.

Sen. Imee Marcos, chair of the Senate committee on economic affairs, said that in the latest bidding to supply PPE, local manufacturers secured only 14 percent of the total P4.8 billion contract.

But local producers lost to foreign companies because of a rule that required them to deliver 1 million PPE sets in 15 days.

Sen. Nancy Binay suspected the possible existence of a cartel in the PPE procurement.

Marcos said the “same few companies” continued to win in the biddings.

The DOH denied that it favored foreign manufacturers over local PPE makers.

“The DOH does not, and has never, favored any particular source for PPE,” Health Undersecretary Maria Rosario Vergeire said, adding that the health department was not directly involved in the purchase of PPE.

It is the Department of Budget and Management that is in charge of PPE procurement, she said.

“It is the Procurement Service of the Department of Budget and Management, which serves as the procuring arm of the DOH for PPE and other commodities for the pandemic—the DOH only provides the technical specifications of the PPE and equipment that it needs,” she said.

Vergeire said the DOH recognized the impact of the pandemic on the garments industry and had tapped Conwep for the local production of PPE.

She said the department was seeking further collaboration with the Department of Trade and Industry (DTI) and Conwep for additional orders of locally made PPE.

When asked to comment about the PPE producers’ problems, Trade Secretary Ramon Lopez said they hoped that there could be a law that would ensure the procurement of products from government-initiated manufacturing programs, such as what was done in the case of the repurposed companies.

“We are for buying local and we, in DTI-BOI [Board of Investments], assisted local manufacturers into repurposing their operations to produce the PPE and medical-grade masks. We supported and endorsed them to procuring agencies and I know they participated in the required process of bidding,” he said.

There is currently a pending bill in the Senate called the Pandemic Protection Act of 2020, which was filed separately and in different versions by a number of senators.

One provision of the bill requires the government to give preference for locally produced goods. Moreover, the government will be required to pick the local manufacturer with the lowest bid, as long as this is not 15 percent to 20 percent higher than the lowest bid of a foreign supplier.