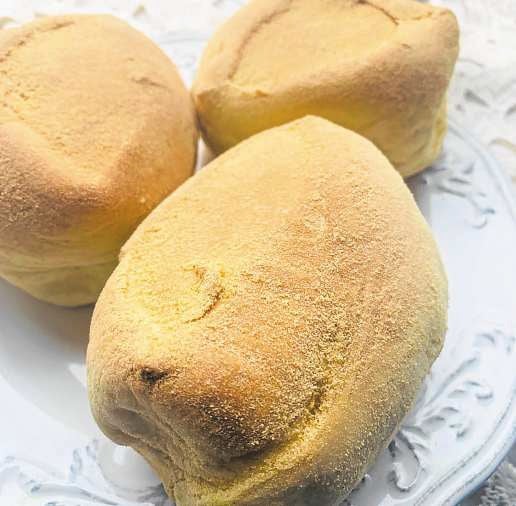 Previously, I wrote about the food chronicled by Antonio Pigafetta, the Italian historian who was with Ferdinand Magellan when he landed in the Philippines. Wanting to learn more about this, Fr. Kevin Crisostomo of St. Joseph the Parish-Tambo interviewed me on his online show Kape at Kampay on the topic, “500 Years of Food, 500 Years of Faith.”

One of the viewers asked about pandesal, the quintessential Filipino bread. A viewer, whose comments the host read online, claimed that the Portuguese also have pandesal.

The traveler in me—I have been to Lisbon and Fatima and went to the corner bakery every morning—wondered if this was true and perhaps I just missed it.

In fact what the Portuguese have is not pandesal but something similar called papo seco or Portuguese rolls. These are light and airy, with a crusty outer layer. Like pandesal, these are served as dinner rolls, used for sandwiches, or dunked in soup or stew.

A popular Portuguese sandwich that uses this bread is called bifanas. Marinated pork slices simmered in a sauce of white wine, garlic and paprika are placed in the papo seco with either mustard or piri-piri sauce.

From Portugal’s Alentejo region, there is another bread that is also quite similar, but with a harder crust called the Pao Alentejano. As a traditional bread, it is also prepared with natural yeast and has a slightly acidic aftertaste.

Another viewer mentioned pandesal in Mexico. What the Mexicans have is called bolillos. It is also crusty on the outside with a soft interior, but this is closer to a French baguette than to the Filipino pandesal, hence it is also called Pan Frances or pan blanco.

My research also led me to Scottish morning rolls called baps that are even closer to pandesal than the Portugese papo seco or the Mexican bolillos. Very much like pandesal, these have a wonderfully thin, crisp crust with a light and fluffy interior. And like Pinoys, the Scots enjoy these for breakfast alongside fried eggs and bacon or sausage, or with butter and jam.

One would be inclined to surmise that the pandesal has its origins in Portuguese cuisine. After all, Magellan, although leading a fleet that was Spain’s, was in fact Portuguese. But for all we know, there may have been someone of Scottish descent in Magellan’s crew as well.

In his message for the Pontifical Mass at the grand celebration of 500 Years of Christianity in Cebu last April 14, Papal Nuncio Archbishop Charles Brown noted the international character of Magellan’s crew: “In addition to the numerous Spaniards and Portuguese, there were men from Greece, Germany, Italy, Sicily, France, Malaysia, North Africa, Flanders, Holland and even Ireland.” The food influences could have been from any of these countries.

What is most interesting to note, however, is that the first bread introduced to the Philippines was none other than the Eucharistic bread.

The rajahs of both Limasawa and Butuan—Rajah Siagu and Rajah Colambu—and the other natives with them partook of this at the Easter mass presided by Fr. Pedro de Valderrama, the chaplain of Magellan’s fleet.

This was real bread, not the round flat host that Catholics today know, as pointed out by Fr. Mark Vincent Salang of the diocese of Maasin when I interviewed him and Fr. Johnrey Sibi about the first Easter mass recorded by Pigafetta on a show I host on the Catholic site Dominus Est.

I asked, “Father, considering that Magellan’s fleet had been travelling since 1519 and they only landed in the Philippines in 1521, how did Fr. Pedro Valderrama ensure that there would be enough hosts to last them that long?”

Salang pointed out that most likely, Valderrama baked a fresh batch of unleavened bread for the Easter morning mass. After all, the hostia or sacramental bread is easy to make using just flour, water and salt.

Now that I think about it, pandesal or pan de sal translates to salt bread. For all we know, it could have its origins from that very first bread baked by Valderrama for the first Easter mass in Limasawa.

Whatever its origins, we know for sure that pandesal is 100-percent Pinoy, not Portuguese, not Mexican, not even Spanish.

Dining guide Eater even has this to say, “The soft and airy flour roll is as close as it comes to a national dish.” While this statement is a bit of a stretch—it’s just bread, not a dish—I think we can agree that it is definitely, unarguably Filipino.

Filipinos in Israel, Gaza in ‘trauma’ as PH labor authorities gear up for rescue

Roque may speak on int’l law, but Locsin says it isn’t foreign policy