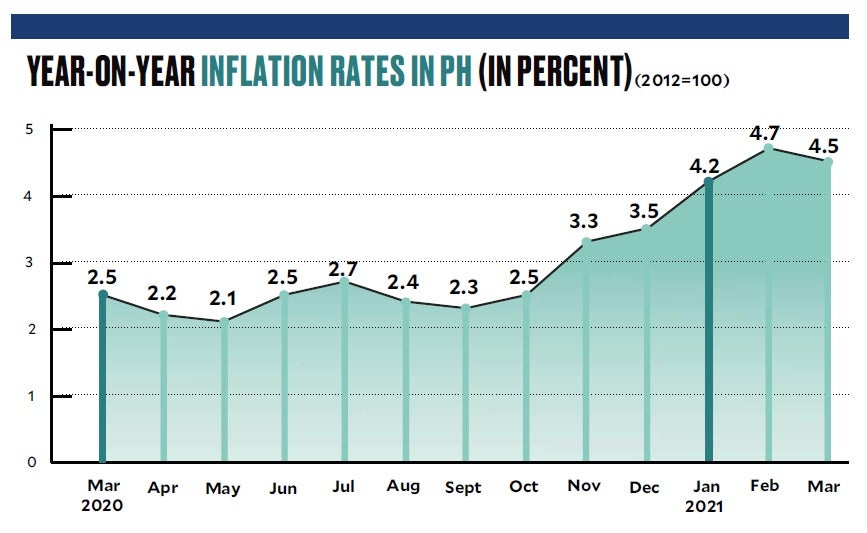 Inflation slightly eased to 4.5 percent year-on-year in March and cut short five-straight months of rising rates even as the price ceiling imposed on pork products failed to bring down prices. The cost of other meat such as beef and chicken also jumped last month.

The rate of increase in the prices of basic commodities in March brought the first-quarter average to 4.5 percent, above the 2 to 4 percent target band considered as manageable.

Among the poor belonging to the bottom 30-percent income households, the inflation rate in March was a higher 5.5 percent, similar to February’s. The end-March average of 5.3-percent inflation among the country’s poorest households meant they shelled out more than usual for their transport, utilities, food and health expenses amid the COVID-19 pandemic.

Philippine Statistics Authority (PSA) data released on Tuesday showed that in the case of food and non-alcoholic beverages, which accounted for about half of the consumer price index (CPI) basket, year-on-year inflation eased to 5.8 percent in March from 6.7 percent in February as fish, fruits and vegetables had slower price increases last month.

On the other hand, meat prices climbed by a faster 20.9 percent year-on-year in March from February’s 20.7 percent.

In a television interview also on Tuesday, Finance Secretary Carlos Dominguez III noted that the Philippines was a big consumer of pork, which drove inflation up in recent months.

“We imposed price controls merely as a shock to hold back the prices while we decrease our tariff rates and increase the amount of pork that is allowed to come in. We’re not using price controls as the only means to hold back prices, but we are actually increasing supply. This is a supply-driven issue,” Dominguez said.

The March inflation rate also reinforced the central bank’s projection that the consumer price index would likely exceed the government’s full-year forecast range, but return to normal in 2022.

In a statement, Bangko Sentral ng Pilipinas Govenor Benjamin Diokno said it reflected “the impact of supply-side constraints on domestic prices of key food commodities such as meat as well as the continuing uptick in international oil prices.”

The central bank had earlier forecast the March inflation rate to come in between 4.2 and 5 percent, with a “point projection” of 4.6 percent—slightly lower than the February CPI of 4.7 percent.

“Nevertheless, inflation is still seen to return to within-target band in 2022 as supply-side influences subside,” Diokno said, repeating his call for “timely and effective implementation of direct measures” by the national government that could contribute to easing price pressures. INQ