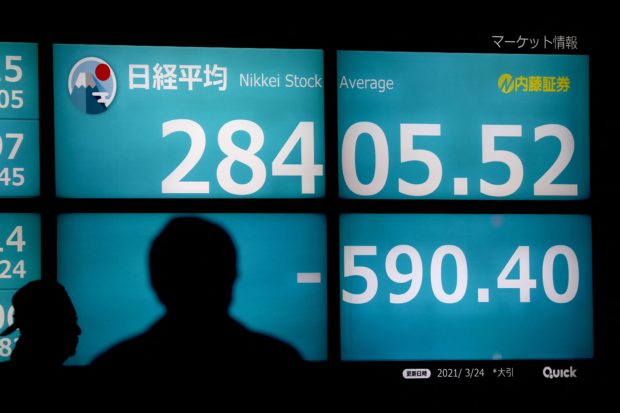 Pedestrians walk past a stock indicator displaying closing numbers of Nikkei 225 of the Tokyo Stock Exchange in Tokyo on March 24, 2021. (Photo by Behrouz MEHRI / AFP)

HONG KONG, China  – Markets rose in Asia on Friday, capping another painful week for investors as a forecast-beating US jobs report and Joe Biden’s pledge to double his vaccination target soothed recent worries over rising infections and new lockdowns in Europe.

However, long-running concerns over inflation caused by the expected economic resurgence continue to cast a pall over trading floors, while China-US tensions have also inched back into the narrative.

Wall Street’s three main indexes enjoyed gains after data showed US unemployment claims last week came in below 700,000 for the first time since the pandemic, reinforcing optimism that the world’s top economy is on the mend.

And Asia followed suit, with Tokyo and Taipei adding more than one percent, while Hong Kong enjoyed healthy gains after falling for five straight days. Shanghai, Sydney, Seoul, Singapore, Jakarta and Bangkok also rose, though there were some losses in Manila and Wellington.

The US jobs figures came as Biden gave the first news conference of his presidency at which he promised 200 million doses of Covid-19 vaccine would be administered in his first 100 days.

His pledge lifted hopes that strict containment measures could be gradually lifted, allowing life to return to a semblance of normality sooner and getting people spending again.

But the positive outlook has investors fearing a huge consumer spending splurge — along with Biden’s recently passed $1.9 trillion stimulus — will send inflation soaring and force the Federal Reserve to tighten the ultra-loose monetary policies that have been a key pillar of a year-long markets rally.

And while Fed boss Jerome Powell has repeatedly stated he will not hike interest rates from record lows until inflation is running hot for an extended period, traders are increasingly betting on an increase coming sooner rather than later.

This has sent benchmark 10-year US Treasury yields, a barometer of future interest rates, to a one-year high.

National Australia Bank analyst Tapas Strickland said investors were questioning the Fed’s ability to stick to its promise, pointing out that Powell had indicated a rollback of some easing measures as progress was made on the bank’s inflation and unemployment goals.

“Nothing new in those words, of course, but a hint that as the economy rebounds, Fed guidance could evolve, particularly around the asset purchase programme,” Strickland added.

But DWS Group said in a note: “The bond market has started to worry about an overheating of the economy. That is what you would expect to happen, when adding an extra fiscal boost to an already nascent recovery.

“In our view, the increase in inflation numbers is likely to be of transitory nature. We would expect inflation rates to come down again later this year.”

Traders are keeping an eye on developments in Europe, whose leaders are struggling to get their vaccination programmes rolling at the same time they try to prevent another wave of infections.

Germany and France are among the countries that have had to revert to strict containment measures, raising concerns the region’s economy will take longer to emerge from the crisis than the United States and Britain, where inoculations are speeding along.

The problems in Europe were also roiling oil markets, which have swung wildly this week — plunging on fears about demand as the recovery stutters, but rallying on a hit to supplies caused by a container ship getting stuck in the Suez Canal.

The commodity — which earlier this month struck a 14-month high, returning to pre-pandemic levels — was slightly higher in Asian trade, having shed more than four percent on Thursday.

“There was no specific news behind the sharp drop in oil,” said Axi’s Stephen Innes.

“The Suez Canal blockage’s transitory nature gave way to general nervousness around rising Covid-19 cases in Europe, India, and Brazil. And with an enduring safe-haven bid under the US dollar continuing to pressure oil prices, eventually, the trap door sprung, triggering a ferocious sell-off.”