Urban transformations: Where the city meets the sea 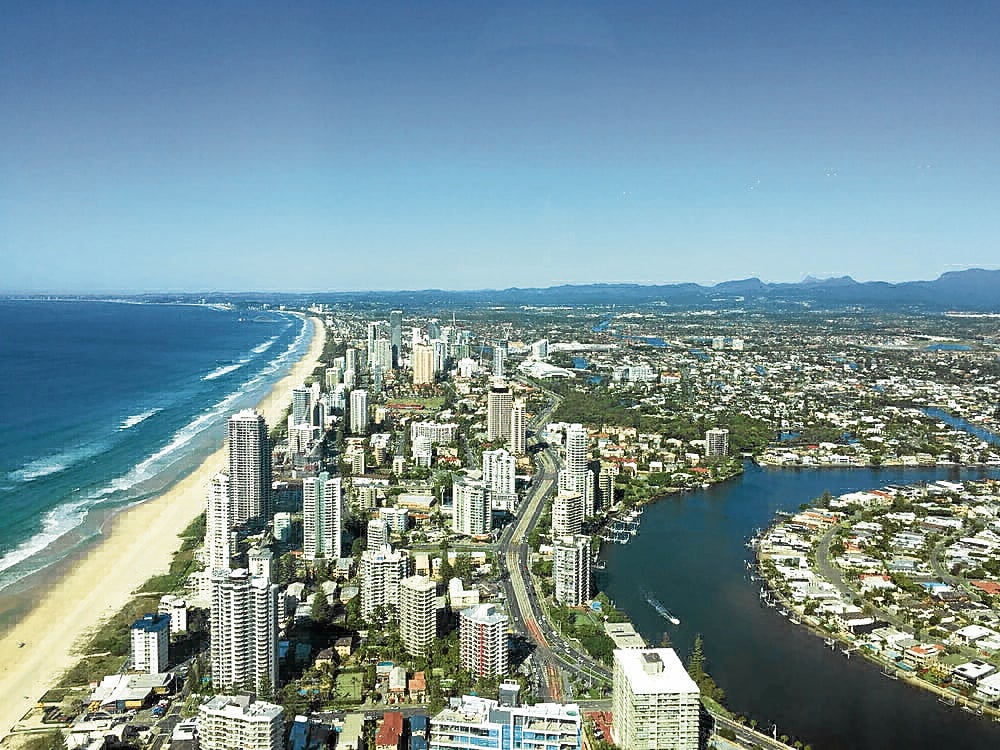 Where is the edge of the city?

In the terrestrial realm, the boundary can be amorphous—the city as a gradient of built form that spills into the countryside. The physical edge, however, is irrefutably distinct when we reach the shores of seas. Coasts are the firm demising lines that hem the march of cities.

And yet, much like the relationship of cities with the rest of the natural environment, cities are intrinsically linked to oceans, more so for the islands of the Philippines—a country with a coastline of over 36,000 km. Over 800 of our municipalities and 10 of our largest cities are located in coastal areas. The marine-terrestrial edge is home to roughly 60 percent of our population. Seas are effectively the connective tissue of our archipelago and most of us are inhabitants of this domain where land meets the sea.

Cities have often overlooked their impact and responsibility for marine resources, often because of the apparent immensity of the seas and the difficulties of visualizing or quantifying the offshore effects of urban life.

• Food from the sea is a significant source of sustenance and protein for most of the world’s population. About 3 billion people depend on oceans for food. And yet stocks of the most widely used food have been falling, endangering global food security.

• Ninety percent of the total volume of the world trade is done by sea. Port cities are places through which the world’s wealth moves.

• Oceans produce half of the oxygen supporting life on earth and, together with marine plants, absorb 30 to 50 percent of CO2, mitigating the effects of climate change. When plants in the ocean die, the carbon in their tissues gets stored in the ocean floor as blue carbon.

• Oceans are part of a larger ecosystem that cities depend on through the cycle of water from oceans to clouds to fresh water in our streams and aquifers. While cities occupy only 2 percent of the Earth’s surface , oceans occupy 70 percent. And even within terrestrial areas, the watershed supplying water to cities covers 41 percent of our land surface.

• Places close to water are among the most valued places for human settlements. As a species, humans are naturally drawn to water environments. John F. Kennedy once said, “All of us have in our veins the exact same percentage of salt in our blood that exists in the ocean, and therefore we have salt in our blood, in our sweat, in our tears.” We have a biological connection with the oceans.

Oceans provide survival, ecological and cultural services to society. Yet, when we plan cities, often the effort stops at the edge of the marine environment. The coast becomes a boundary of opposing forces between city and sea. The asymmetrical urban-hinterland relationship common to inland metropolises applies to our coastal cities as well: urban economies draw natural capital from oceans while simultaneously degrading them, using the seas as both source of urban consumption and sink for our wastes.

This asymmetry comes at a cost in terms of food security, pollution, rising sea levels and severe weather. Coastal cities are the most vulnerable to these impacts. They are the living spaces of tomorrow and yet they are also the most at risk. The boundary between cities and oceans highlights a limitation—not of nature, but of cities and our ability to reimagine the urban realm that can potentially achieve a better symbiosis with the ecosystem. 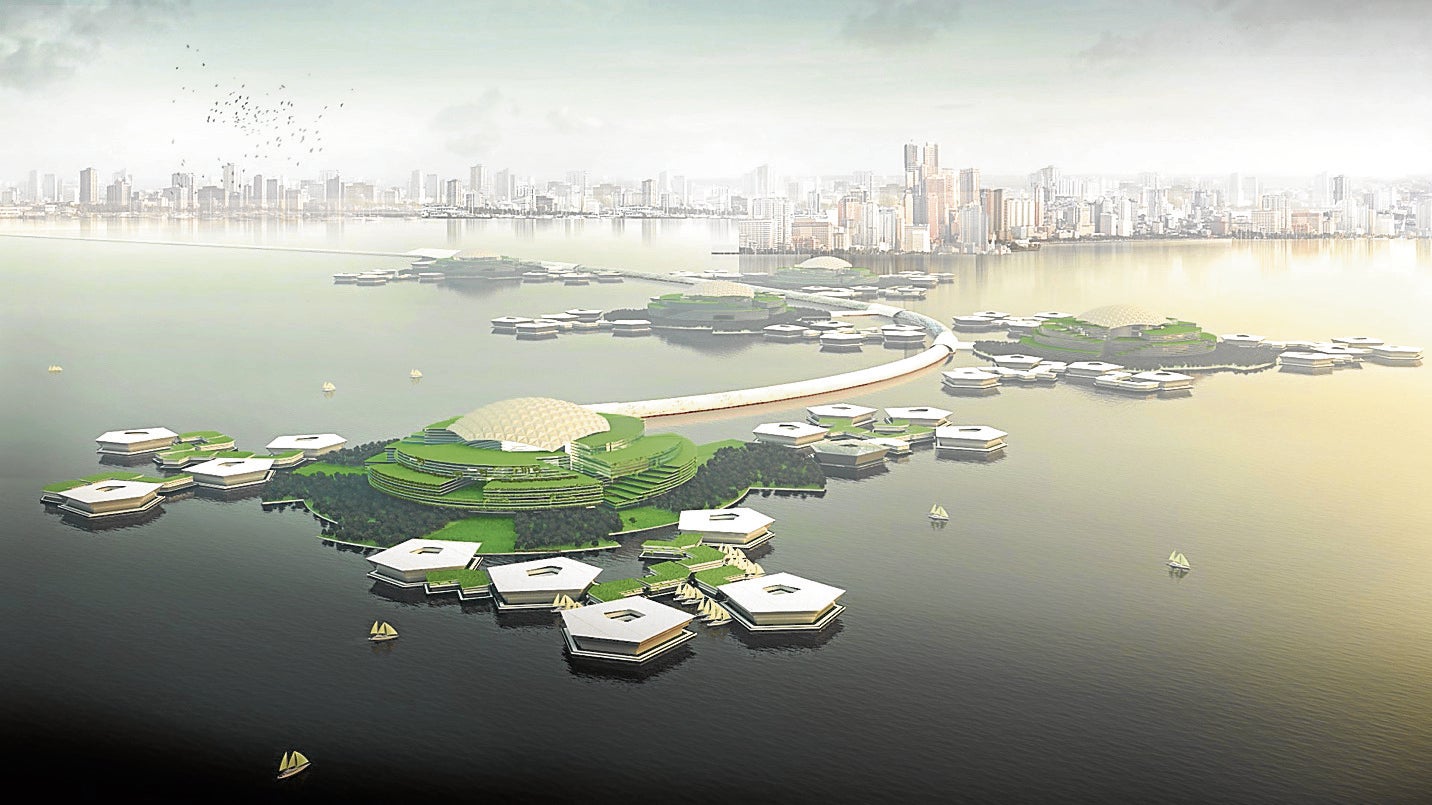 Cities can benefit from a blue urban agenda. Bold visions for cities imagine them as net producers instead of net consumers of energy. Ocean energy can be instrumental for fueling coastal societies. Wind, tidal and wave kinetic energies can be harnessed for renewable power. Ocean thermal energy conversion technology can be used to cool buildings through heat exchange from ocean temperature differences. Plastic waste recovered from the sea can be reprocessed into fuel or recycled. Biofuels from marine waste and fish residues can support a circular economy by turning waste into fuel. Similarly, food and fuel from algae and seaweed can be harnessed from our oceans.

Nature-based solutions can enable coastlines to be restorative and climate-resilient. Living shorelines that use constructed tidal beds, wetlands, mangroves and oyster farms to cleanse and absorb excess nutrients from the sea and restore habitats have been implemented in some coastal cities. Floating farms have been used by traditional settlements for centuries and can be adopted to regenerate threatened wetlands and mangroves.

Floating cities can likewise be a restorative and adaptive solution for the crises facing our cities. Technologies for floating structures have long been developed in the Netherlands and have been applied in small scale. Bolder ambitions for whole communities located offshore seek to create environments that step lightly on our sea beds. 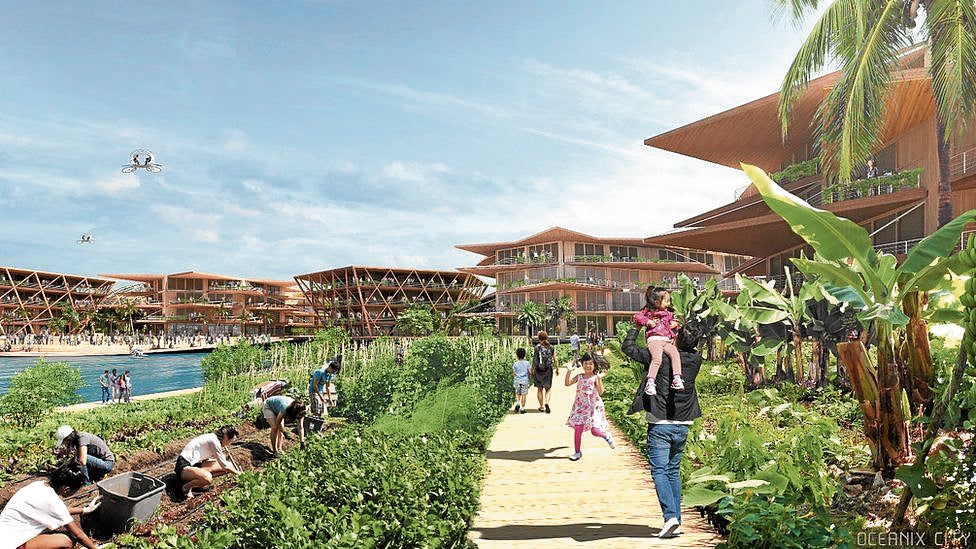 Oceanix, a sustainable floating city for a community of 10,000 people, by Bjarke Ingels Group

New thinking of the urban realm

So, where do cities begin and end? What we are realizing is we can best answer this by first extending our terrestrial maps beyond shorelines and city limits. The sea is not just the swath of blue in our land use maps. It is rich in hues of different uses—reefs, kelp forests, algal blooms, and yes, also of garbage and sewage plumes that are intrinsically tied to the city. Our plans do not reflect the extent of our urban footprint that reaches so much further beyond the boundaries we have commonly assumed. The disconnection between built and natural environments has impaired our knowledge of critical water, carbon, energy, food and waste cycles, to the detriment of other species and future inhabitants of our cities.

We need a more holistic spatial and temporal view of our cities to be able to plan them sustainably—a whole of society mindset. The real urban transformation happens with the change in our own mental maps. We begin by expanding our spatial view of the urban realm to encompass the larger interdependent ecosystems of air, sea and land, forests and human settlements; and temporally by looking to the past for solutions made by generations before us and looking ahead to the generations we are ultimately accountable for.

The author is founder and principal of JLPD, a master planning and development consultancy firm. Visit www.jlpdstudio.com