More in store for Alfamart partners

Alfamart, the first and only Super Minimart chain in the Philippines, has been expanding its reach for the past six years of its Philippines operations. In that short period of time, Alfamart has opened over 1,000 branches by 2020 (a notably challenging year due to the pandemic).

As it expanded over the years, small businesses and individuals partnered with Alfamart were also able to ride on Alfamart’s expansion. Martiniano “Degs” Valencia was one of those individuals.

Degs has always had the heart and soul of an entrepreneur. As a young schoolboy in Sta. Rita, Pampanga, Degs plied the streets of his hometown, selling boiled corn and fresh carabao’s milk to earn some extra cash. His entrepreneurial streak continued well into his college years, supplying Pampanga’s meat products to various stores in Manila. 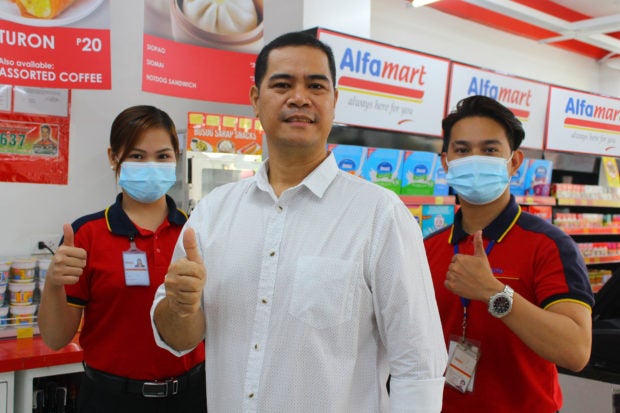 Martiniano “Degs” Valencia (center), a former OFW, is enjoying the fruits of his decision to become a partner and co-owner of the Alfamart in his hometown in Sta. Rita, Pampanga. Degs’ branch helped his local community survive the pandemic during the resulting lockdowns.

He had to put a pause on his passion for business when he entered the workforce. First as a broadcast engineer for a big TV network in the Philippines, then as a technical controller in Dubai. After more than a decade of being an employee, he and his wife decided to come back to the Philippines, which also turned to an opportunity to reignite Degs’ entrepreneurial spirit.

Degs invested most of his earnings on his land in Sta. Rita, building a commercial complex. That’s when he was approached by Alfamart with a partnership offer, to become a lessor of an Alfamart branch in his hometown. And the rest, as they say, is history.

“I always wanted to have a grocery store as a main business,” Degs said. “Alfamart did us one better and gave us the opportunity to partner with a Super Minimart,” he added.

When the pandemic struck, Degs lost some income because some of the tenants in his commercial complex closed down. Despite that, they survived because they had the Alfamart branch that sustained them. “We’re glad that [our branch] was able to remain open as people still did need a nearby Super Minimart, especially when people were not allowed to travel too far from their homes,” he said. “The community helped our branch survive and vice-versa,” he shared.

The dynamics between the community and the store encouraged Degs to offer up his other lots as possible Alfamart locations. Currently, Alfamart is working on opening a new branch at Deg’s other property in the neighboring municipality of Guagua.

Alfamart is looking forward to partnering with more people like Degs. “After 1,000 stores, we’re still moving forward with plans to reach more areas in the country. And we’ll pretty much do what we did before, find the perfect people and businesses to partner with,” said Alfamart Philippines COO Harvey Ong. “We definitely have more in store for our partners, both current and potential. Whether they are product consignees, suppliers, tenants, or lessors, we will always grow with them and the communities our branches serve,” Ong added.

For more information on how to become an Alfamart partner, you may visit https://www.alfamart.com.ph/do-business-with-us/.