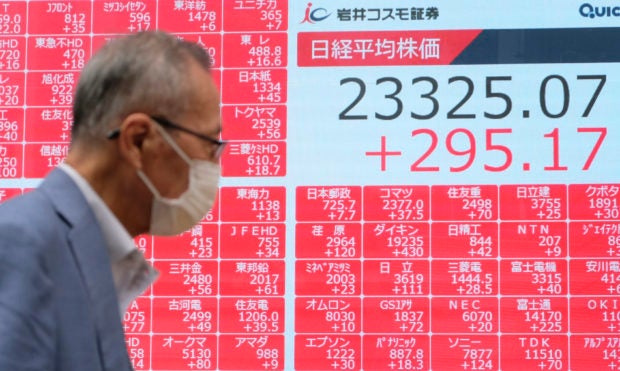 HONG KONG – Asian investors retreated as the rollercoaster ride on global markets continued, with fears over inflation winning the tug of war with vaccine optimism on Thursday.

After a year-long rally across the planet and with light at the end of the pandemic tunnel, focus is now on the expected surge in activity as lockdowns are eased and life returns to some semblance of normal.

And the growing belief is that a gargantuan spending splurge from pent-up consumers — and an imminent stimulus package — will light a rocket under prices, forcing central banks to wind back ultra-easy monetary policies — including record low interest rates — that have been a key driver of the stocks surge.

A rise in US Treasury bond yields, a crucial guide of future rate expectations, to one-year highs in recent weeks has rattled equities, and a pick-up Wednesday sparked another Wall Street plunge.

The panic has come despite repeated Federal Reserve assurances that it will not tighten policy until inflation is consistently high and employment has recovered, both of which it insists are a long way off.

The fear of higher borrowing costs has combined with a feeling that valuations may have run ahead of themselves and were due a pullback on profit-taking.

“Inflation is a concern; there is a lot of money sloshing around the system and it makes sense to have some sort of a correction right now,” Shana Sissel, at Spotlight Asset Group, said.

“And bond yields going up is the market’s implicit way of tightening since the Fed has made it clear they don’t have the intention of doing so.”

And Axi’s Stephen Innes added that the US central bank “will need to fabricate a more convincing scenario to keep rate hike fever in check and avoid a colossal meltdown”.

“Since March 2020, the free-and-easy-money principle has bankrolled speculators, and that liquidity-supported house of cards could easily topple at the first sign of a Fed blink.”

Readying for ‘next leg higher’

After a strong performance Wednesday, Asia was back in the red. Tokyo and Hong Kong were down around two percent, while Shanghai, Sydney, Seoul, Taipei and Manila gave up more than one percent.

In Washington, US Senators are due to start debating Joe Biden’s stimulus, with the president giving way on some demands from moderate Democrats to put a cap on the number of people getting a $1,400 cash handout to remove high earners. The decision, analysts say, could reduce the cost of the rescue package but it would still likely be more than $1.5 trillion.

The talks come as data showed fewer US private payroll jobs than expected were created in February as the country was slammed by a severe freeze, leading to speculation Friday’s closely watched government figures could also miss forecasts.

“The reality is that the stock market’s consolidation and the retest of the recent lows is serving as the ‘pause that refreshes’, in that stocks are now gearing up for the next leg higher,” he said in a note. “But as any market climbs higher, it grows increasingly narrow and more fundamentally focused. Money is chasing fewer stocks and the rising tide will no longer lift all boats.”

He added: “Things are moving quickly with the pandemic, stimulus and the international arena. Tomorrow, things could look a lot different.”

Oil prices edged up, extending Wednesday’s big advances, as optimism that the reopening of economies will boost demand offset expectations OPEC and other key producers will agree at a meeting Thursday to lift output after almost a year of caps put in place to support the market.

However, Bjarne Schieldrop, chief commodities analyst at SEB research group, said: “There is within the alliance a major difference of opinion on the capacity of the oil market to absorb new volumes.”

He added that Russia, the world’s second biggest producer, “leans for caution” while number three Saudi Arabia “defends the increase in supply”.