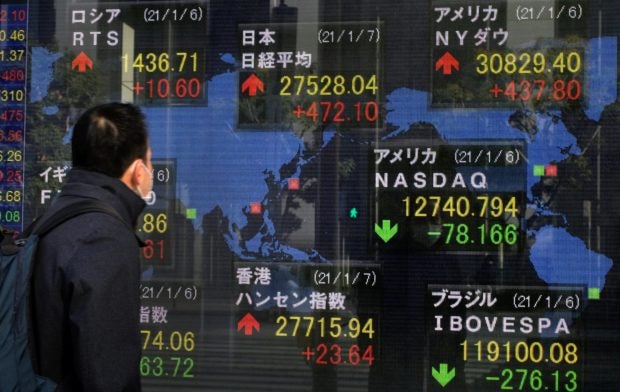 HONG KONG – Another Federal Reserve reassurance it would not hike interest rates until absolutely necessary buoyed Asian markets Thursday, while traders were also taking heart from more positive developments on the vaccine front.

Expectations the global economy will rocket have helped equities surge in recent weeks, but optimism is giving way to concerns the rebound — and an imminent government stimulus — will fire inflation and force the central bank to reverse its ultra-loose monetary policy.

The prospect of higher borrowing costs down the line has sparked a sell-off across world markets, where observers were already worried that bubbles had developed and a correction was on the way.

Fed boss Jerome Powell for a second day reiterated the policy board’s commitment to keeping the financial taps wide open until inflation was sitting persistently at its two percent target and unemployment had been tamed.

While agreeing that prices would rise as the economy returns to normal, he said that did not mean inflation would run away.

Rising prices are “a different thing from persistent high inflation, which we do not expect and if we do get, then we have the tools to deal with it.”

He pointed out that car prices had jumped because of a lack of microchips but that was a one-off and would not lead to inflation, which was “a process that repeats itself year over year over year”. “It may take more than three years” to reach its targets, he said.

Powell’s colleagues at the Fed echoed his comments, with vice chair Richard Clarida upbeat about the economy but saying it would “take some time” to get the economy hack to its pre-pandemic state. Governor Lael Brainard added that inflation remained “very low”.

“Technically… Powell did not reveal much new at his hearing,” said National Australia Bank’s Rodrigo Catril. “He effectively reiterated the Fed’s commitment to maintaining the bank’s ultra-accommodative policies until ‘substantial further progress has been made’.

“With the recent rise in equity prices along with encouraging signs the US economic recovery could be entering a stronger phase, aided by vaccine rollouts, the market was wary that Powell may show less appetite to support the economy.”

Catril added: “So, the punch bowl ain’t going anywhere anytime soon and the policy backdrop should remain supportive for risk assets for some time still.”

Wall Street welcomed the remarks, with all three main indexes rebounding from early losses to end in positive territory and the Dow hitting a new record.

And the positivity flowed through to Asia, where Tokyo, Hong Kong, Shanghai, Sydney, Seoul and Taipei all rose more than one percent, while Singapore piled on more than two percent.

The rally has been given added momentum by hopes for a rollout of more vaccines after a study of 1.2 million people showed the Pfizer drug was 94 percent effective in combating Covid-19, while Johnson & Johnson’s single-shot appeared to be very good at fighting severe cases, including newer variants.

And US firm Moderna announced its new candidate aimed at the dangerous South African mutation was being tested.

Traders are keeping tabs on Washington, where Joe Biden’s vast economic rescue package is winding its way through Congress, with the House expected to vote on it Friday. Lawmakers hope to push the $1.9 trillion plan before unemployment benefits expire next month but Republicans are pushing back, saying the price was exorbitant and went far beyond coronavirus relief.

Read Next
SMDC helps build better, more sustainably with integrated communities
EDITORS' PICK
Pre-order the new vivo Y20s [G] to get a free TWS earphone
In good spirits: SMDC helps farmers and residents through Kadiwa Market
DSWD chief admits ‘slow start’ in distribution of aid in ‘NCR Plus’
65% of Filipinos say Duterte’s health should be made public – SWS
Smart three-peats as country’s fastest mobile network – Ookla
Would the military allow me to stay this long if I’m inutile? – Duterte
MOST READ
Vico Sotto frets getting photos of ‘butt vaccination’ from Pasig dwellers
Metro Manila to have shortened curfew hours from 8 p.m. to 5 a.m. under MECQ
San Miguel Corp. continues to invest heavily in the Philippines’ future
COVID-hit Roque slams ‘un-Christian’ query on how fast he secured hospital bed
Don't miss out on the latest news and information.