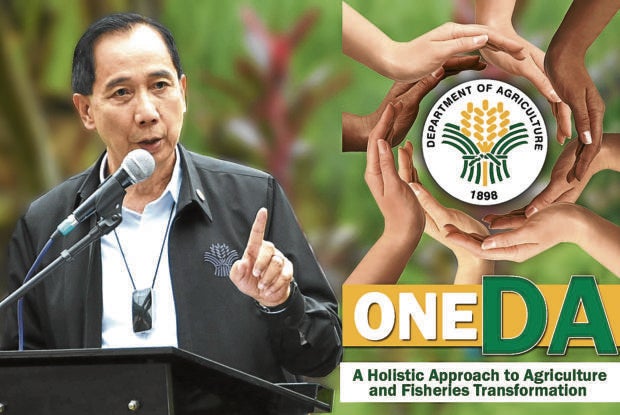 The Department of Agriculture (DA) is welcoming the new year with a new framework and renewed hopes that restructuring the agency will help it achieve its annual agriculture growth target of 2.5 percent.

Agriculture Secretary William Dar, who has been steering the agency in new directions forced by the COVID-19 pandemic, recently launched the “One DA” framework—a program that he described as an “inclusive approach” to helping agricultural stakeholders by providing them enough safety nets, and one that involves the reassignment of several key officials and the creation of new subprojects.

“We have survived the worst, rebooted our policies, and refocused our priorities. The next step is to pursue systematic and strategic approaches to further ‘grow’ the agri-fishery sector in strong and sustained partnerships with local government units, private sector, farmers’ and fishers’ groups, and other national government agencies,” Dar said.

The bureaucratic facelift is much needed, given that the agriculture industry had been pummeled by a number of catastrophes that resulted in volatile prices and supply constraints.

Until now, a year after the disaster, the government is still struggling to revive the Taal community following the Taal Volcano eruption where coffee farms, livestock, poultry, and other crops were destroyed by mounds of ash. Poultry and livestock raisers also trimmed production, which is expected to be felt this year, following the low prices of poultry brought by the economic lockdown last year and the persistence of the African swine fever. Even the crops subsector was not spared following the infestation of fall armyworms in corn and Panama disease in bananas.

The last straw was the series of typhoons that battered farming communities at the end of 2020. 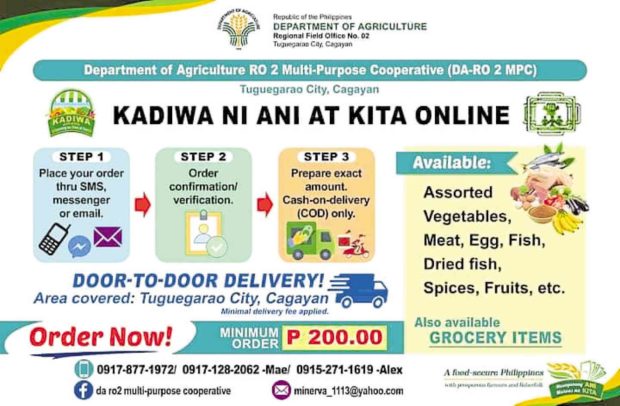 Kadiwa doing business online to continue linking farmers to consumers during the lockdown.

All these were happening with the coronavirus contagion as its tragic backdrop. Logistics has long been a problem plaguing the agriculture, wherein products do not get quickly and efficiently to the target markets thus driving up prices. The COVID-19 crisis that prompted sometimes extreme lockdowns merely magnified the problem.

Quarantine restrictions have been gradually lifted but even then much of the economy remains at a standstill and that spells disaster for the livelihood of big players in the agriculture sector—poultry raisers suffered from excess chicken supply following the closures of restaurants and hotels; prices of fish dove by as much as 60 percent as exports sales dwindled, and hog raisers continued to grapple with the African swine fever.

And yet, consumers have had to bear with skyrocketing prices as transport costs took their toll.

The weight of the pandemic, however, also became the catalyst for the rise of agricultural start-ups and farmers organizations, and cooperatives whose businesses are anchored on the accessibility of the digital space. It also prompted the DA to finally facilitate online transactions between farmers and consumers through its Kadiwa project and tap courier services for delivery.

These new distribution channels did not solve the industry’s woes, but these were at least able to reduce shortages and ease price pressures by bringing the produce closer to the consumers.

“In the absence of businesses that offer a ready market, we are now looking into more domestic consumption,” Agriculture Assistant Secretary Kristine Evangelista said. “[Filipinos] may not be able to dine outside, but they still have to eat inside their homes. We can develop these new buying habits and bring our items to the houses as an alternative to the lost markets.”

These tie-ups and collaborations between the government and the private sector helped make agriculture the only industry to actually grow during the second quarter of the year when the lockdown was at its strictest. The growth continued in the third quarter as food, after all, was the most essential of essentials.

“[D]espite the combined effects of the community lockdowns due to the COVID-19 pandemic and severe weather conditions … it confirms that we are on the right track particularly on our palay and corn production program initiatives in partnership with farmers’ groups, local government units and the private sector,” Dar said . 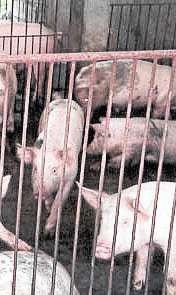 But several industry groups are not entirely convinced. The Samahang Industriya ng Agrikultura and the Federation of Free Farmers, for one, has repeatedly asked the government to hold off on the arrival of imported farm products to stave off the overwhelming supply of domestic goods and raise farmers’ income.

Traders and importers, on the other hand, argued that affordable imports are needed more than ever given uncertainties.

Muddling through the new economic terrain brought about by the pandemic continues to be a difficult task for the agriculture industry, but the challenges of 2020 brought to the fore the resilience of the sector, making it an attractive bet and an area ripe with growth opportunities just waiting to be tapped.

For Dar, digital is one way to go for the agriculture sector.

“’Online’ is the new byword in safeguarding food security in the country,” he said. “A more comprehensive digitalization of the agricultural supply chain could germinate further growth in the agriculture sector.”

Read Next
PSEi gains 0.59% as businesses expect more support from gov’t
EDITORS' PICK
Pre-order the new vivo Y20s [G] to get a free TWS earphone
In good spirits: SMDC helps farmers and residents through Kadiwa Market
DSWD chief admits ‘slow start’ in distribution of aid in ‘NCR Plus’
65% of Filipinos say Duterte’s health should be made public – SWS
Smart three-peats as country’s fastest mobile network – Ookla
Would the military allow me to stay this long if I’m inutile? – Duterte
MOST READ
Vico Sotto frets getting photos of ‘butt vaccination’ from Pasig dwellers
Metro Manila to have shortened curfew hours from 8 p.m. to 5 a.m. under MECQ
San Miguel Corp. continues to invest heavily in the Philippines’ future
COVID-hit Roque slams ‘un-Christian’ query on how fast he secured hospital bed
Don't miss out on the latest news and information.