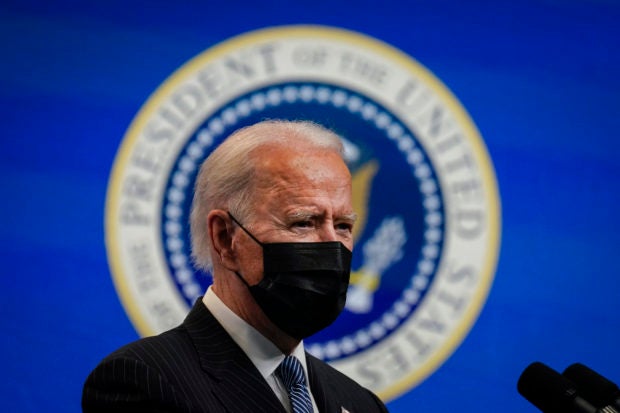 U.S. President Joe Biden speaks after signing an executive order related to American manufacturing in the South Court Auditorium of the White House complex on January 25, 2021 in Washington, DC. (AFP)

The order is aimed at boosting national production and saving industrial jobs by increasing investments in factories and workers, and comes after Biden promised on the campaign trail to “build back better” as the US economy struggles through the Covid-19 pandemic.

Washington spends $600 billion each year on contracts, and the order tightens loopholes that allow federal agencies to buy products stamped “Made in America” but which are often manufactured by companies that only produce a small portion of their products in the United States.

“American manufacturing was the arsenal of democracy in World War II and it must be part of the engine of American prosperity now. That means we are going to use taxpayer money to rebuild America,” Biden said.

But the order risks running up against the country’s outsourced supply chains and also rankling American trading partners, most notably Canada.

The US and its northern neighbor Canada along with Mexico are all part of a free trade agreement that took effect last year, and Canadian Prime Minister Justin Trudeau raised the “Buy American” policy in a recent phone call with Biden, Deputy Prime Minister Chrystia Freeland said on Monday.

However she noted “the United States sells more to Canada than it does to China, Japan and the UK combined. And what we are really going to focus on in our work with the Biden administration is those win-wins.”

Less than a week after his inauguration, Biden has so far used executive orders to push through his agenda, though this latest order is similar to ones made by his predecessors, particularly former president Donald Trump.

Trump had issued an executive order urging the federal government to purchase more US-made products and also turning tariffs into a weapon against imports — with mixed results.

The Buy American Act of 1933, still in force, requires federal agencies to prioritize purchasing goods produced on US soil, but Biden said “big corporations and special interests have long fought for loopholes” to that law.

“That is going to change on our watch,” he said, adding that he will create a position at the White House to find ways to get American factories federal government contracts.

The administration will also alter the definition of what is considered a US-made product and reduce the possibilities for exemptions, while also reviewing waivers already granted.

“We’ll work with small American manufacturers and businesses to give them a shot to raise their hand and say, ‘yeah, I can do that here in my shop, in my town,'” Biden said.

The Alliance for American Manufacturing trade group welcomes Biden’s move, with its president Scott Paul saying, “The law should mean what it says: an American product should be truly Made in America.”

During his presidential campaign, Biden promised to strengthen the “Buy American” process with a $400 billion plan for projects using US-made products — including steel, or protective equipment for health care workers battling Covid-19.

However, companies have already warned that overly restrictive rules could make it more difficult to buy parts made outside the country and cause costs to soar.

The coronavirus pandemic introduced an element of national security into the debate, highlighting the vulnerabilities of the country’s supply chains for critical supplies like masks and other equipment to protect against the virus.

“We can never again be in a position where we have to rely on a foreign country that doesn’t share our interests in order to protect our people during a national emergency,” Biden said.

Read Next
PH firms face 2021 with ‘reserved optimism’
EDITORS' PICK
Pru Life UK receives four golden arrows for solid corporate governance
6 p.m. to 5 a.m curfew stays as ‘NCR Plus’ bubble shifts to MECQ
‘NCR Plus’ to be under MECQ starting April 12 until April 30 — Palace
Pre-order the new vivo Y20s [G] to get a free TWS earphone
Philippines, US to begin 2-week joint ‘Balikatan’ exercises on Monday
Speed up your game with the new vivo Y20s [G]
MOST READ
Stop ‘creeping occupation’ of ‘militia’ boats in WPS, Pacquiao asks China
Bea Alonzo clarifies status of her relationship with Dominic Roque
Convicted former aide of Sen. Bong Revilla dies — BuCor
Locsin to China: ‘Then move out’
Don't miss out on the latest news and information.