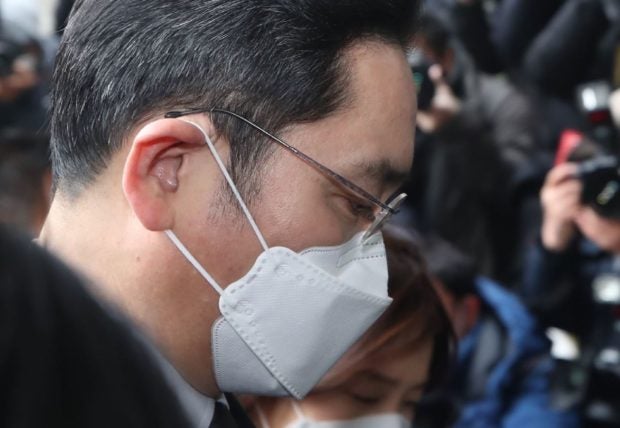 SEOUL — Samsung heir Lee Jae-yong will not appeal last week’s appeals court ruling that sentenced him to 2 1/2 years in prison in a retrial of a high-profile bribery case, his lawyer said Monday.

Last Monday, the Seoul High Court handed down the verdict to the vice chairman of Samsung Electronics Co. for bribing former President Park Geun-hye and her longtime friend, Choi Soon-sil, to win government support for a smooth father-to-son transfer of managerial power at Samsung. Lee was sent back to prison after the sentencing.

His lawyer Lee In-jae said his client respected the court ruling and decided not to take further legal action.

Monday is the deadline for an appeal. The prosecutors said they were reviewing whether to appeal the decision. If they decide not to, by the end of the day, the court verdict will be finalized.

In 2017, he was sentenced to five years in prison for providing a total of 8.9 billion won in support for Choi’s daughter’s equestrian training and a donation to a sports foundation run by Choi’s family. But he was freed the following year after an appeals court sentenced him to a suspended prison term of 2 1/2 years, based on the revised amount of bribes at 3.6 billion won.

In August 2019, the top court ruled Lee offered 8.6 billion won in total in bribes and remanded the case to the appeals court for retrial.

Given the prison time he already has served, he will be freed in July 2022, unless he is granted a pardon or commutation. Yonhap