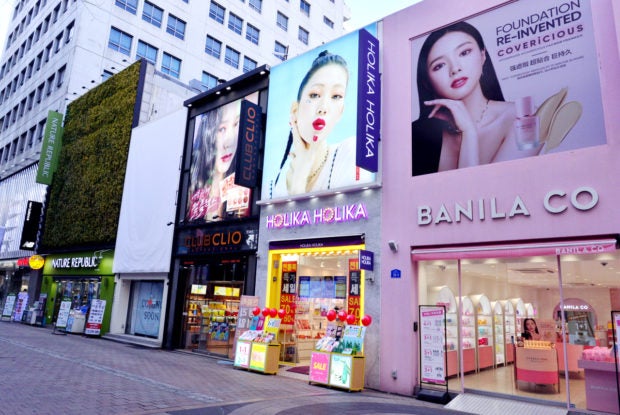 SEOUL — High street beauty stores were once the symbol of the country’s K-beauty boom. Lining the streets of Myeong-dong, South Korea’s most expensive shopping district, the beauty franchise stores used to be bustling with tourists from Japan and China as well as those at home.

But as tourism plunged and shopping shifted online during the pandemic, they are declining at an alarming level.

“With the absence of foreign tourists since March last year, nearly every other shop appears to be closed in Myeong-dong,” a Nature Republic official said. The company, one of the once-thriving class of “road shop” beauty brands in Korea, sells their products through its own franchise network.

“Some of our stores, except the Myeong-dong World Branch, have been closed temporarily ever since,” the official said, referring to its flagship branch occupying the country’s most expensive retail space at the entrance of Myeong-dong’s main street.

The brand is in the process of shuttering several of its brick-and-mortar stores in a bid to trim losses and focus on several key locations, the official revealed.

The number of Nature Republic stores has been on the decline for some time, from 701 in 2017 down to 521 in 2019, data from the Fair Trade Commission showed. Latest data on how many of the 521 stores survived 2020 was not yet available.

Other road shop brands like Skin Food and Tony Moly have faced a similar fate.

Bigger cosmetics companies with more diverse sale channels, too, were no exception to the pandemic fallout.

Amorepacific, a K-beauty powerhouse with over 30 brands such as Sulwhasoo and Laneige, saw the number of its physical stores plummet by 661 between late 2018 and August last year, according to data from the Fair Trade Commission obtained by lawmaker Yu Eui-dong.

When broken down by brand, Aritaum saw 306 store closures while Innisfree and Etude had to close 204 and 151 stores, respectively.

“The number of our stores has been on the decline because of an industry-wide struggle as well as the challenges our company faces,” an Amorepacific official said. “But the coronavirus pandemic made things drastically worse.”

Despite the headwinds, the cosmetics conglomerate has sought to move forward by opening “experience-based” branches such as Amore Seongsu, a three-storey space that allows customers to try out their product lines as well as participate in makeup classes, the official said.

The cosmetics industry as a whole has suffered, as mask wearing has hurt demand for makeup products, said Park Jong-dae, an analyst at Hana Financial Investment.

To offset the sharp decline in in-person sales, most companies have switched to focus on e-commerce channels.

The app has racked up over 1 million downloads, according to the company, and products from its brand Missha are also being sold on other e-commerce platforms such as Auction and Coupang.

Nearly 32 percent of sales at Aritaum, Amorepacific’s multibrand store franchise, were generated through online channels such as Coupang, while 63 percent of sales were from its physical stores. Another 5 percent came from drug store chain Olive Young during the month of August.

But there still was some good news from the industry, with high-end makeup brands posting gains last year.

Sales of luxury brands such as MAC Cosmetics and NARS Cosmetics saw a 48.4 year-on-year jump, according to data from SSG.com — an e-commerce platform run by South Korean retailer giant Shinsegae.

LG Household & Health Care defied the doom and gloom during the third quarter of last year. When Amorepacific and Able C&C suffered a sales drop of 22.4 and 29 percent, respectively, it posted 5 percent increase in sales.

The company’s high-end brands like Whoo had helped deliver a strong business performance both at home and abroad, the official added.

LG H&H’s Whoo and Amorepacific’s Sulwhasoo were among the best-sellers on China’s Tmall, operated by Alibaba Group, during the Singles’ Day shopping spree in November.