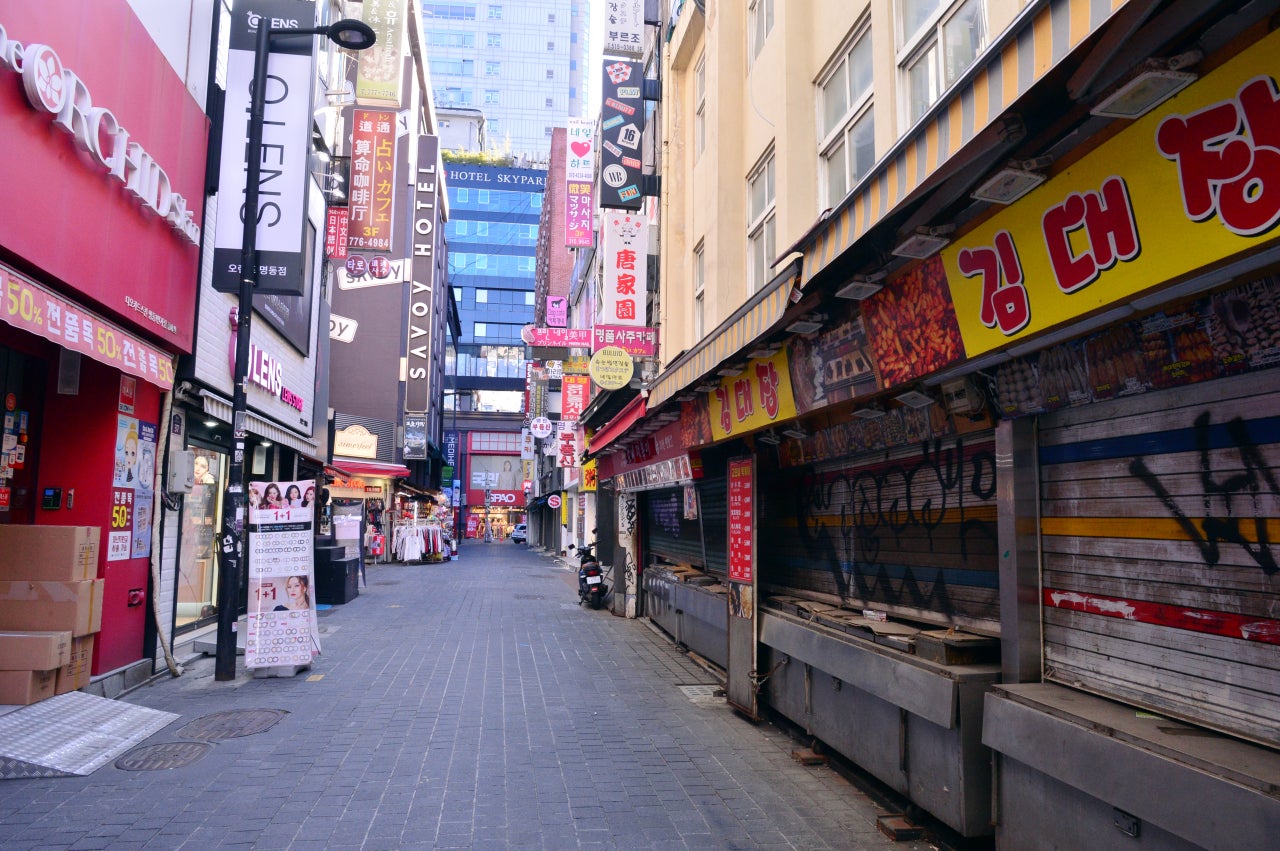 Many shops are closed with few shoppers walking around in Myeong-dong on Jan. 6. (Park Hyun-koo/The Korea Herald)

SEOUL — Bustling, noisy and lively — it is how Myeong-dong used to be described as Seoul’s premier shopping district.

Packed with tourists, food stands and long lines of shops, it is one of the most expensive shopping streets in the world, according to global property firm Cushman & Wakefield’s annual Main Streets Across the World report.

But a quick walk around the shopping district nowadays makes it clear that things have drastically changed — and for the worse.

With many shoppers staying home out of caution and stores making little profit opting to stay closed for the time being, business owners new and old say they are struggling.

“Since last February, international tourists have disappeared,” said Park Jin-yi, a 65-year-old woman who owns a bag shop in an underground shopping mall in Myeong-dong.

In her 30 years doing business in the area, she has seen issues like political tensions with China and Japan hurt the local economy. But the pandemic has been the worst to date.

“It has never been worse than this before,” she said. “Though the rent has been reduced and I have received government subsidies, they are nowhere near enough.”

Park Si-young, a 60-year-old woman who opened a samgyetang restaurant in November, echoed the sentiment.

“We get 20 customers on a lucky day,” she said, standing by the counter overlooking empty tables and the kitchen.

The prospect of a global pandemic seemed unlikely when she signed a lease on the restaurant. 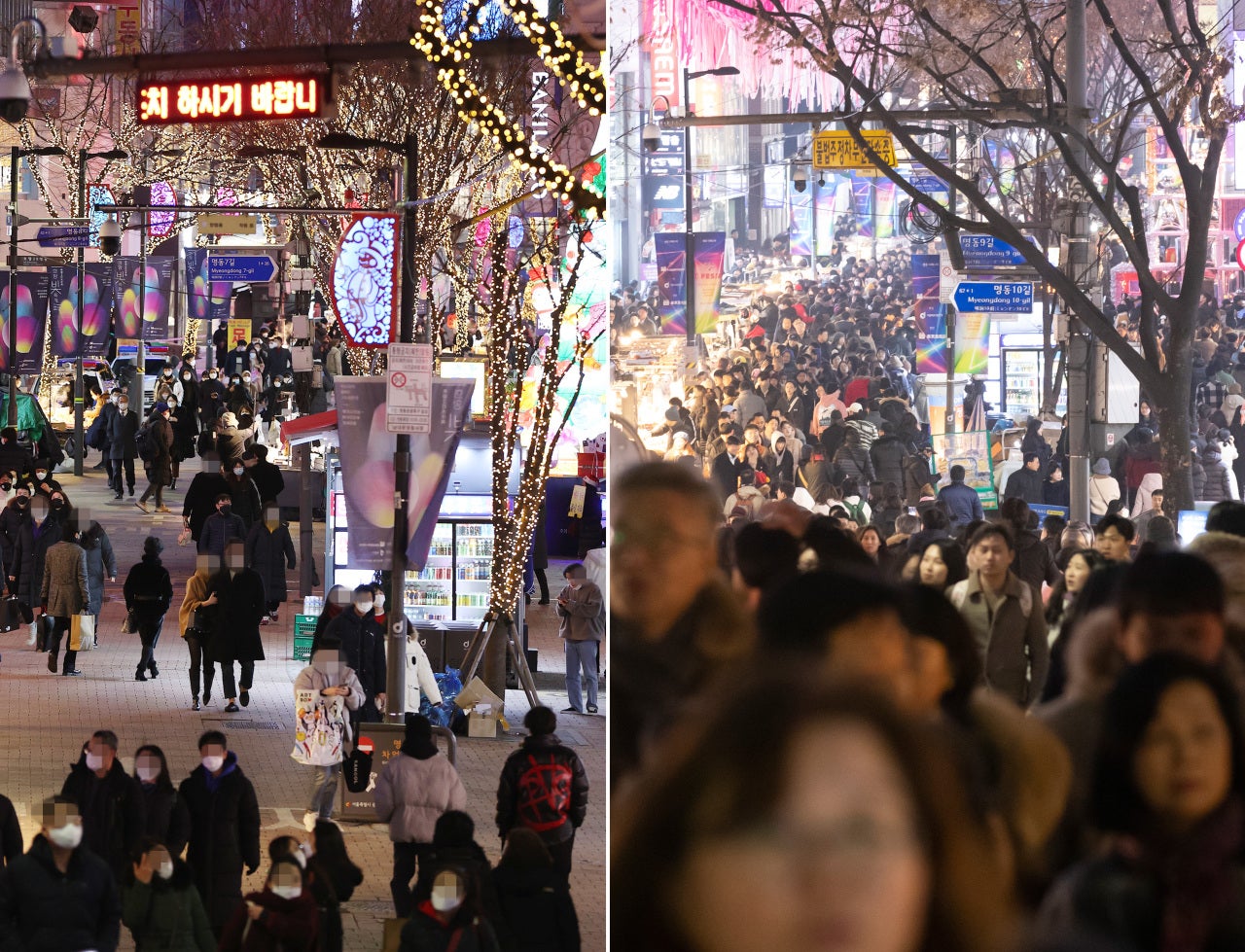 Noticeably fewer people were in Myeong-dong on Christmas Day in 2020 (left) compared to one year ago, before the coronavirus pandemic. (Yonhap)

Her business has been in operation for less than six months — the minimum period required to receive the government’s COVID-19 small business relief grants, leaving her with the only option, as she said, to just “hang in there” as long as she can.

Myeong-dong was already enduring a tough stretch before the pandemic.

China first banned group tours in early 2017 over South Korea‘s deployment of a US anti-missile system here. The heightening political tensions between Seoul and Beijing saw the number of Chinese tourists fall by over 30 percent between April 2017 and April 2020, compared to the three-year span beginning in February 2014, according to the Korea Tourism Organization, dealing a blow to the tourism-dependent shopping street.

Cho Yeong-moo, an analyst at LG Economic Research Institute, explained some landlords have chosen to keep their properties vacant rather than slashing rent, to avoid any negative impact on the property’s value as collateral, and said a “high property vacancy rate and dropping rent rates” indicate a “worsening situation.” 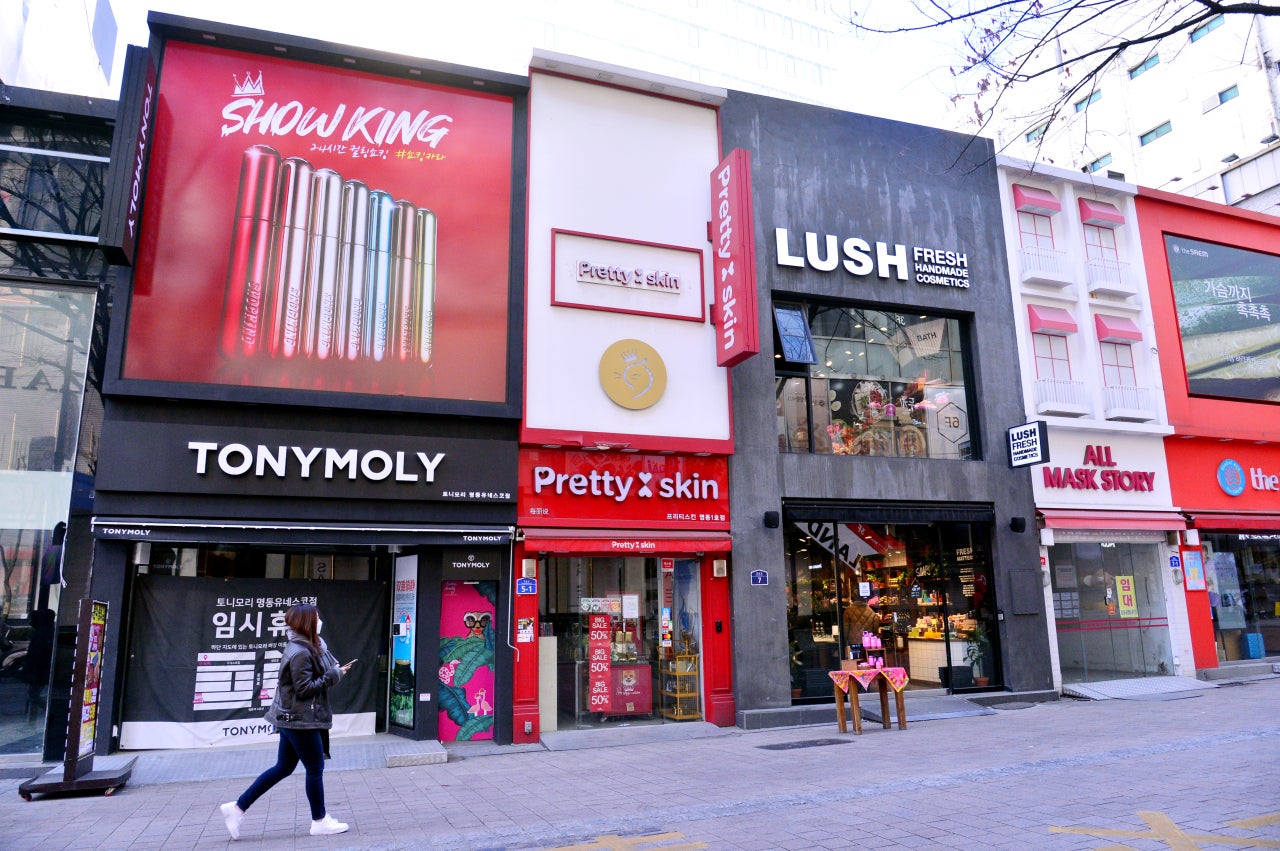 While the pandemic has dealt a severe blow to the retail sector overall, places that heavily rely on tourists like Myeong-dong and Itaewon were more affected than others.

Retail giants are fleeing the district too.

Japanese fashion brand Uniqlo is set to close its four-story flagship store in the shopping district after this month.

“The prolonging coronavirus pandemic, political issues between Korea and Japan and the warmer temperatures last winter all had an impact on our store operation,’ one Unlqio official said in explaining the decision. 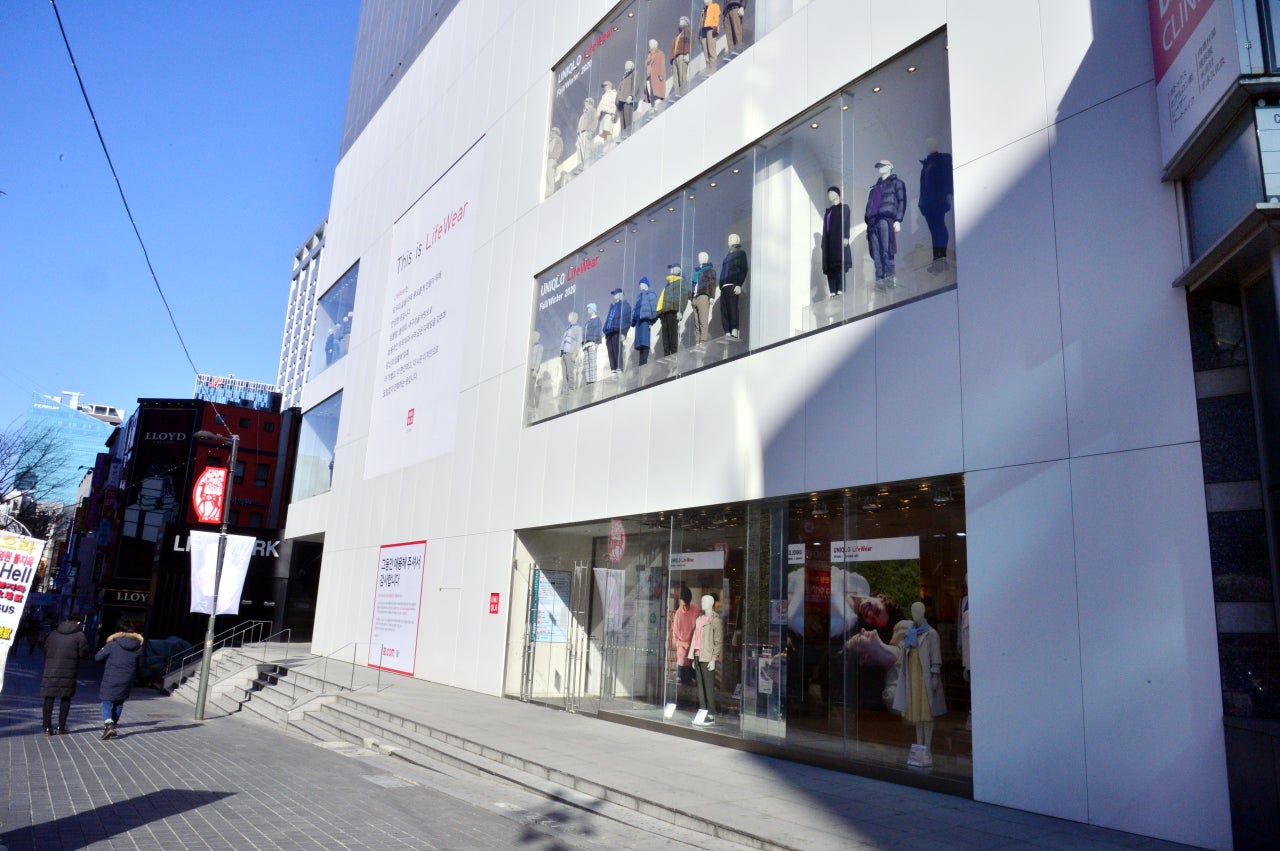 A total of 30 locations faced closure last year, according to the company, with two more awaiting the same fate later this month – one in Myeong-dong and the other in Suwon, Gyeonggi Province.

The move follows in the footsteps of H&M, which closed its first location in the country in Myeong-dong in November.

The Swedish company said it was part of its decision to downsize its physical footprint globally.

“We adopt an omni-channel strategy to focus on both online and physical stores,” said one official at H&M.

“We opened two new locations and launched an online store on SSG.com last year as well as a new membership program in November.”

H&M, which arrived in South Korea in 2009, now operates 35 stores in Korea, including still another in Myeong-dong, which was the most popular destination among foreign tourists according to a 2017 survey by Nielsen Korea.

Beauty stores, which make up a big portion of the area, have also seen better days, as many Myeong-dong branches of major brands including Etude, Nature Republic and Tony Moly have been temporarily shut.

”With the absence of foreign tourists since March last year, nearly every other shop appears to be closed in Myeong-dong. And some of our stores in the area except the flagship Myeong-dong World branch have been closed temporarily ever since,” said one official at Nature Republic.

Data from the Korea Appraisal Board shows that while the capital’s average small commercial property vacancy rate stood at 5.7 percent during the third quarter of last year, the figures for Myeong-dong and Itaewon were 28.5 percent and 30.3 percent, respectively.

The large and medium-sized commercial property vacancy rate, which includes buildings of four or more stories, was 8.9 percent in Seoul and 12.4 percent nationwide during the July-September period. The Korea Appraisal Board’s data only includes properties with an occupancy rate of over 50 percent.

“While foreign tourists might want to visit Myeong-dong as a tourist spot, shopping has spread out throughout the capital for local shoppers, including Gangnam for instance.”