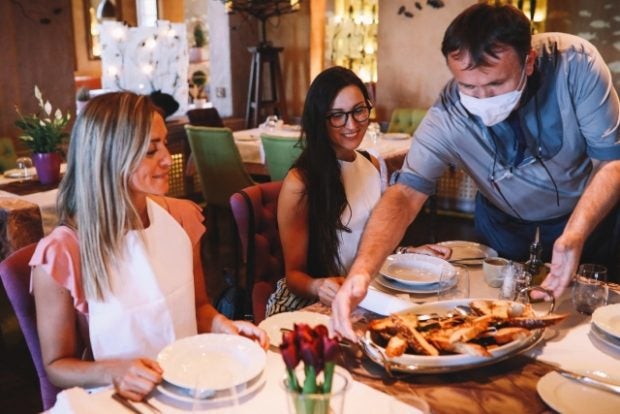 One of the toughest places for restaurants to operate has been New York City, where the limit was only 25 percent capacity before indoor dining was again suspended earlier this month after a spike in coronavirus infections. Image: IStock/lechatnoir via AFP.

Houston restaurant chain Niko Niko’s, like most American restaurants, took a hit from the COVID-19 shutdowns, though owner Dimitri Fetokakis believes it could have been much worse.

But in New York, Vivian Forte, who owns Pisticci in Harlem with her husband, described the local city pandemic rules as “persecution.”

“We thank our lucky stars that we are in a city and state that allows us to work,” Fetokakis told AFP. “I worry about these other states and these other cities. They’re just shutting down their economies.”

Niko Niko’s sales were off more than 50% earlier in the year, but currently are down only 20% to 30%, Fetokakis said.

The Texas chain, known for Gyros and other Greek fare, is helped by the fact it has a local following from its 43 years in business.

It also offered online ordering before the pandemic hit, an advantage compared with other eateries that had to master the technology on the fly.

Fetokakis has added plexiglas dividers to his two indoor Houston restaurants, but said the restaurants normally do not get above 50% capacity because of public concerns about the virus.

“It all depends on what’s on the news,” Fetokakis said. “When you see the spikes (in infections), it drops a little bit.”

One of the toughest places to operate has been New York City, where the limit was only 25% capacity before Governor Andrew Cuomo again suspended indoor dining earlier in December 2020 after a spike in coronavirus infections.

“It is a persecution which is just unbearable in New York City,” Forte said.

While she understands the need for public safety, she said local officials had taken things to an unhealthy extreme.

City restaurants also have grappled with confusing and at times illogical rules. One city directive earlier this month barred customers from entering the restaurant “for any reason,” including, presumably to use the bathroom.

While the order was quickly amended and clarified, New York City Hospitality Alliance chair Andrew Rigie called it “another example of why restaurants and bars feel like government is purposely kicking them in the gut.”

Forte, who has not been taking a salary during the pandemic, welcomed the new government relief package that President Donald Trump signed into law on Sunday, but she expects business to continue to struggle this winter.

Her restaurant is near Columbia University and most students and faculty have been working from home.

She said the restaurant has added 12 infrared heaters for outside tables and “New Yorkers have stepped up to the plate to show they are absolutely crazy and willing enough to eat outside at 25 degrees.”

Even so, Pisticci’s sales were down as much as 70% in some months and at best were off 40% to 50% in summer when outdoor dining was at a peak. CC