Transforming amid a pandemic 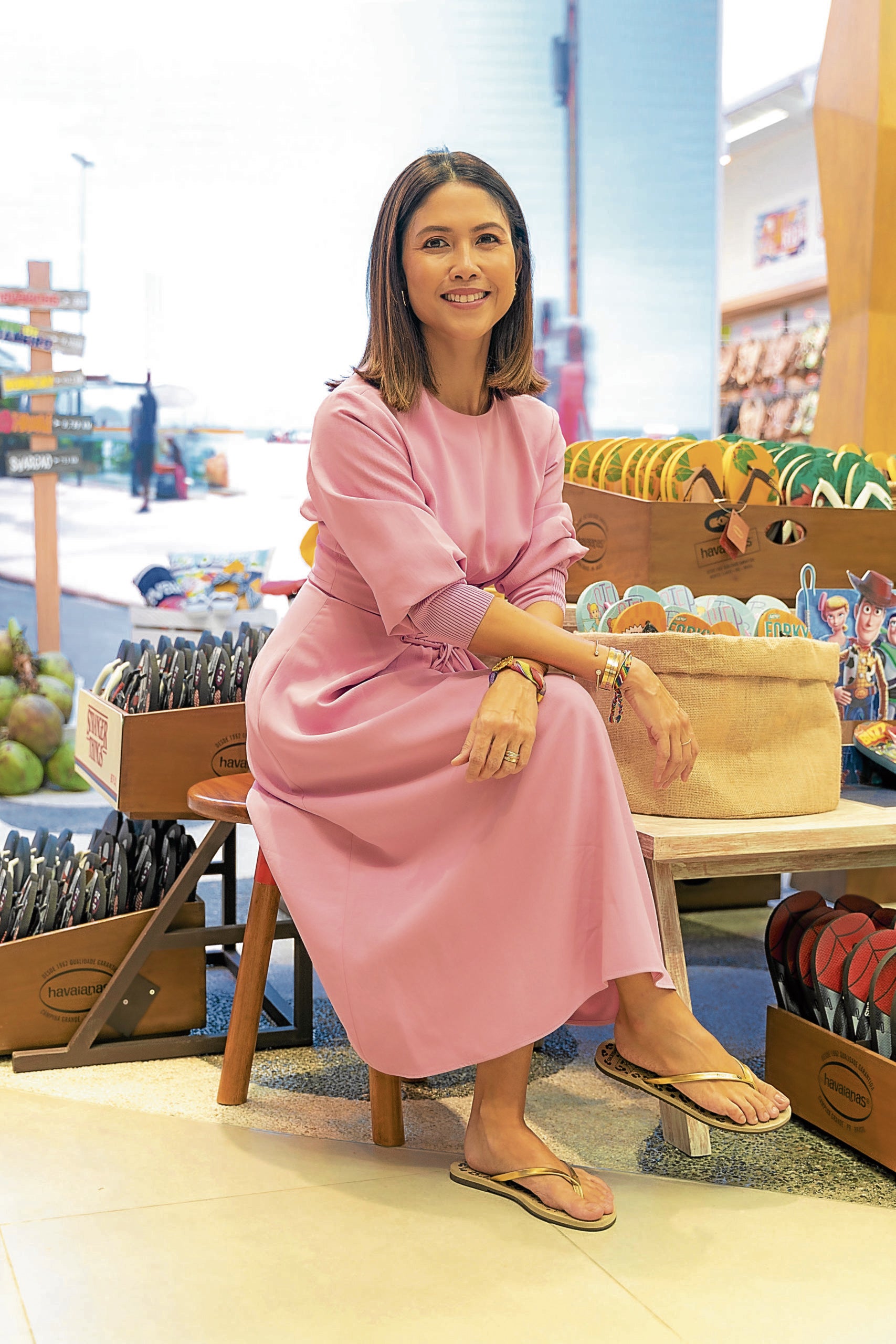 Leading fashion distribution and retail company Terry S. A., which handles the popular Havaianas brand in the Philippines, is no longer the company it was this time last year. COVID-19 saw to that.

Because of the pandemic that bludgeoned the economy and severely restricted the 18-year-old company’s cash flow, Terry S.A. had to quickly adapt to the new circumstances as it needed to survive, in the name of the over 900 employees working in a retail network of 245 stores across brands (Havaianas, Dupe, CommonThread and Aura Athletica) all over the Philippines.

Anne Arcenas-Gonzalez, president of Terry S.A., which she co-founded with her husband, Freddy Gonzalez, told the Inquirer that when the lockdown was imposed in March last year, a small task force consisting of key members of Terry S.A. was immediately assembled to work on financial models reflecting various scenarios, including a yearlong hard lockdown. It believed in preparing for the worst while hoping for the best.

After securing the safety of its employees, the next priority was to immediately generate income. To do this, Terry S.A. launched an Employee Entrepreneurship Program, allowing its people to resell the company’s products in their communities.

This approach combined with a heightened focus on e-commerce became its lifeline for months until the quarantine measures eased starting June, allowing some retail activity to resume.

Nine months later, Gonzalez is proud to say that Terry S.A. has been able to reactivate the majority of its employees.

“The past months on lockdown have reinforced the company’s relevance, innovation, and agility. The significance of its brands (Havaianas, Dupe, CommonThread and Aura Athletica), has been evident during the quarantine period, and will continue postpandemic due to the new ways that Filipinos are living their lives,” Gonzalez said, “The performance of Terry S.A amid a period of deep uncertainty has created a strong sense of pride and ownership among its internal stakeholders: employees and business partners.” 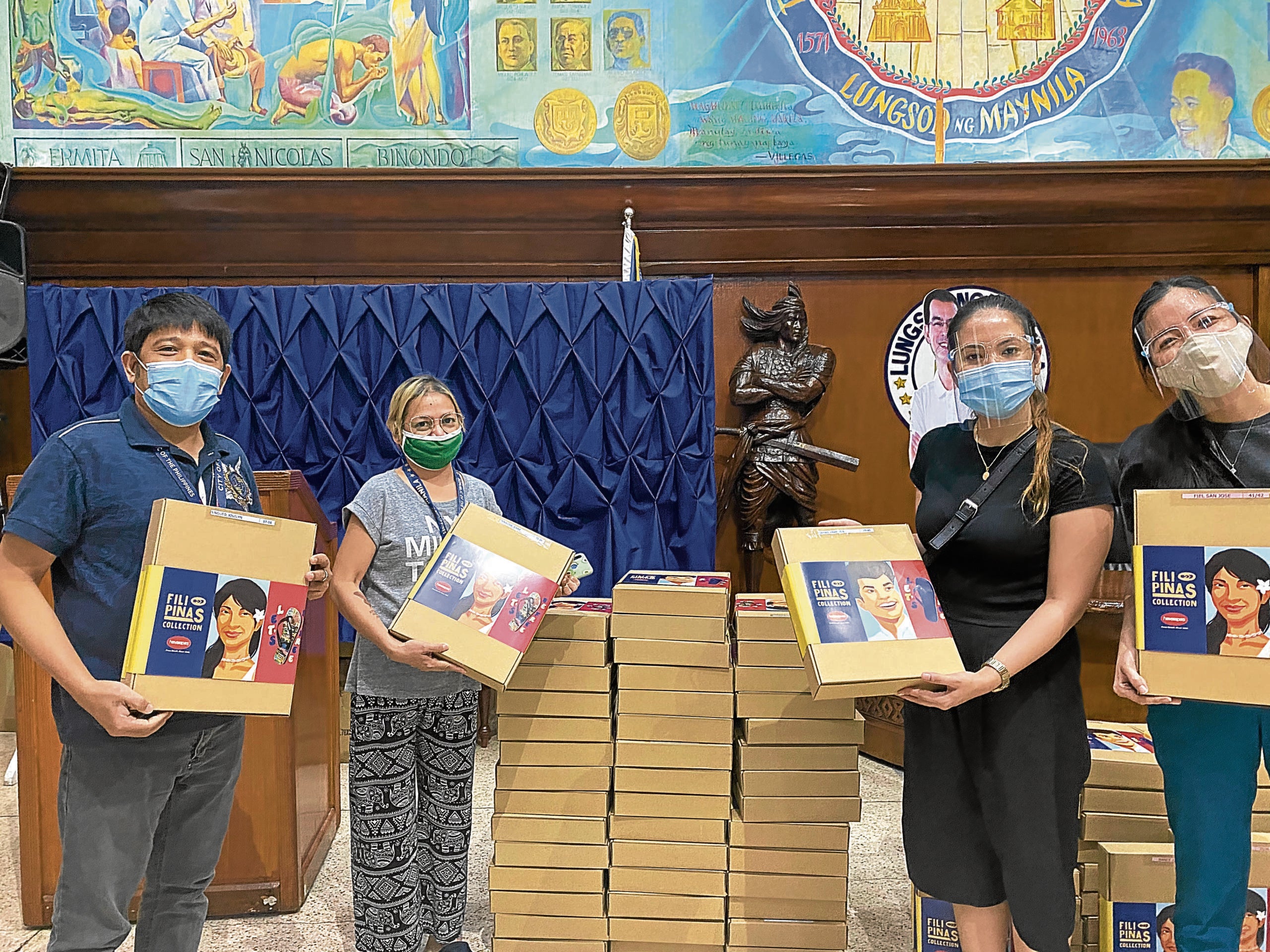 Gonzalez is also proud of how Terry S.A. still managed to gather the resources to extend help to others who were having a more difficult time, knowing that as daunting as its business challenges were, it was still better off than many others.

Using the pledge of P1 million from São Paulo Alpargatas, the mother company of Havaianas, Terry S.A. participated in a frontliner feeding program. It partnered with The Moment Group and gave food to doctors, nurses and staff in 10 hospitals in Metro Manila for one month during the pandemic’s peak. It also partnered with Project Bantu, a nonprofit that helps rehabilitate at-risk boys in San Andres Bukid and supported Fundlife Philippines by providing hygiene and essential kits for vulnerable girls in impoverished communities in Cebu.

Terry S.A. also raised funds through a virtual holiday sale for Save The Children Foundation’s Project ARAL, which aims to provide study-at-home modules so that kids from the poorest areas nationwide continue to have an education even as the pandemic rages on.

The dedicated Terry S.A. team reached out to  communities as it also dug deep to bolster its presence online. Fortunately, while many companies were caught flat-footed by the pandemic and had to scramble to establish an online business, Terry S.A. already had a headstart.

“Terry S.A. did not need to make drastic shifts in digital when COVID-19 struck because we had been building our digital foundation four years prior. In 2016, we embarked on a company-wide effort to prepare our company for a digital future,” Gonzalez said. 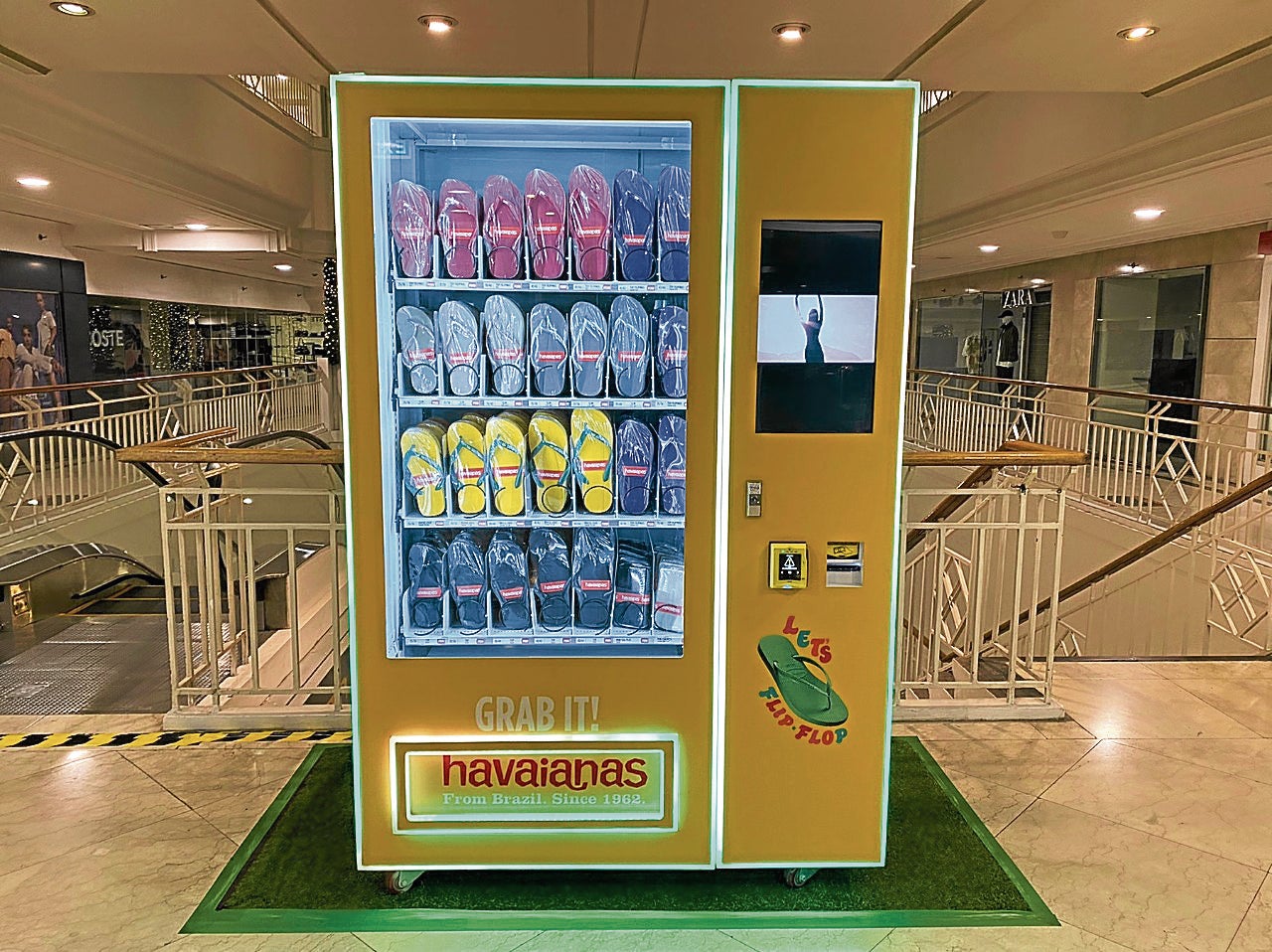 Havaianas vending machines pop up in the city

The shift required substantial investments in systems and in the right people but these have handsomely paid off because Terry S.A. became more than ready to grow its digital commerce arm that has been fully functioning since 2018.

“When the lockdown took place, we were even more committed and confident to focus on our online business. We invested more aggressively in the back end such as manpower, logistics, technology and the front end like marketing and customer service. We currently operate three of our own platforms: havaianas.ph, commonthread.ph and auraathletica.com,” she said.

The first platform is dedicated to all things Havaianas, while commonthread.ph offers carefully chosen fashion and lifestyle brands both foreign and local and established labels mixed with under the radar or up and coming ones. The site has built up its offerings to cater to the current needs of  customers, like essentials, some pantry items, accessories for learning, working and hobbying at home, and other novel finds that are mostly homegrown, to bring little joys to everyone as they ride out uncertain times, she said. Then with the rise of at-home fitness, and wellness, auraathletica.com offers activewear and accessories to cater to this growing segment. The site carries all the brands being sold in Terry S.A.’s brick and mortar store in Power Plant Mall plus exclusives found only on the site.

“Additionally, we are present in the leading online marketplaces and other online channels. Our commitment to digital has served us well. It is now a quarter of our business, and in recent months, Havaianas has been among the top selling brands in platforms like Lazada and Shopee,” she said.

But even with a strengthened digital presence, Terry S.A. knows full well that it will need to get its retail network up and running to as close to pre-COVID-19 levels as possible for it to recover lost ground. 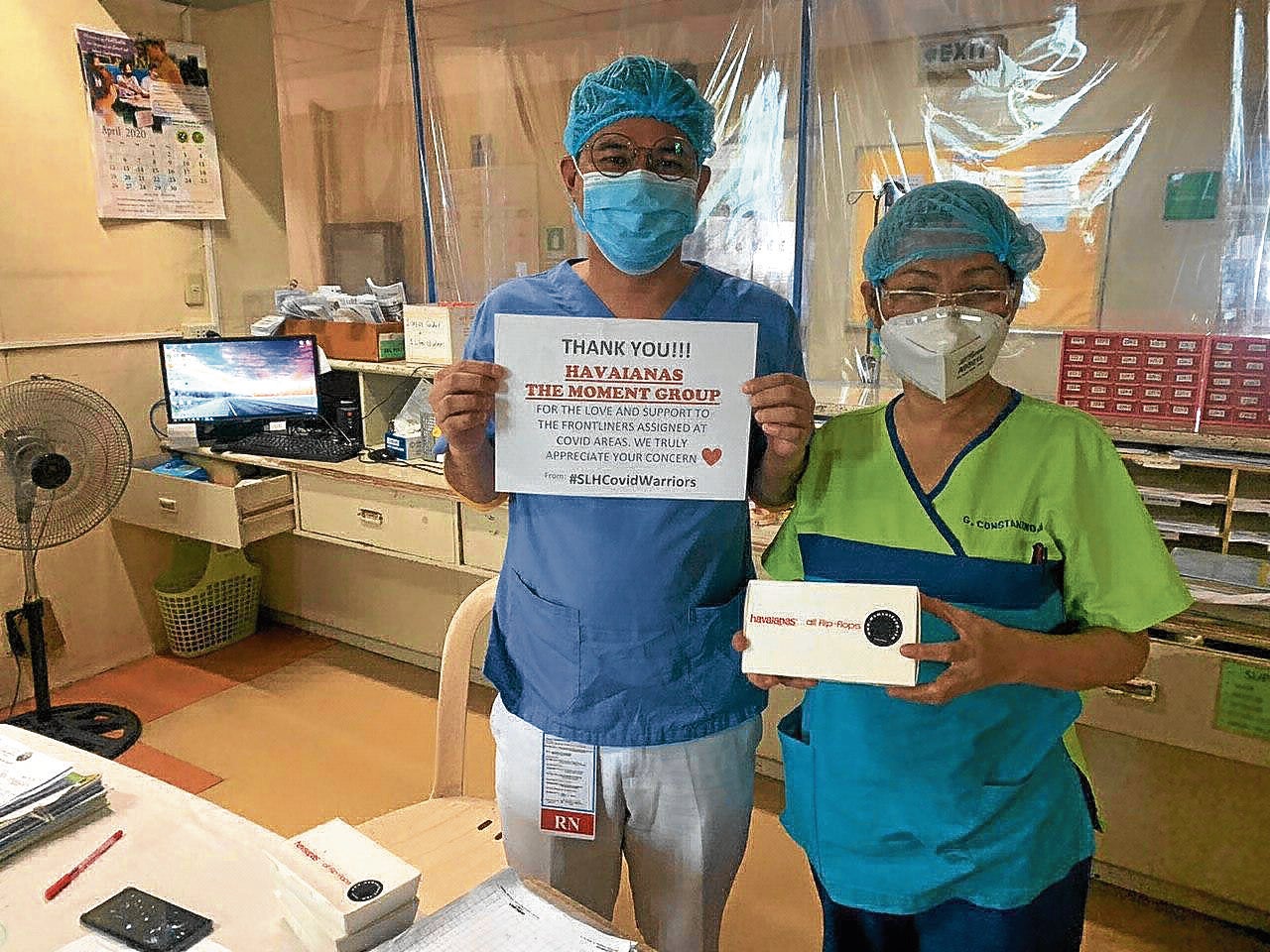 It started reopening its physical stores in phases in May as restrictions to stem the spread of COVID-19 started to ease. But with consumers still wary of catching the virus and spending amid lingering uncertainties, store sales dropped by a staggering 90 percent.

Fortunately, online sales were able to cushion the painful blow and sales have started picking up by an average of 12 percent month-on-month since reopening. Sales are still far below prepandemic levels but the positive trend has provided the needed encouragement and affirmation that Terry S.A. has been implementing the right policies.

“Customer service and merchandise in-store have to be spot on, each time. We have to assume that every customer that makes an effort to enter our store has a reason to buy, and we must be equally deliberate in how we retail to them. Our overall sales across all channels during this pandemic year (2020) has been at an average of 60 percent percent compared to [2019] sales. This makes us very optimistic about our approach, which is to manage our online and offline business by being scientific (driven by data), intentional, creative and agile,” Gonzalez said.

Terry S.A. is preparing to shift to a higher gear this year by building on the retail best practices it was able to employ both online and offline.

Gonzalez said the pandemic had indeed brought out the true entrepreneurial spirit within the company, with every member encouraged to try, test, fail and also succeed.

Notable efforts include the establishment of a reseller program; expansion into nonfootwear and fashion sectors such as groceries, pharmacies and hardware; launch of Havaianas vending machines; participation in delivery apps such as Pickaroo; growth of its mid-priced Brazilian slipper brand, Dupe and the development of new products such as Aura Athletica private label of apparel and small fitness equipment to address current stay-at-home trends.

This year, Gonzalez said her challenge was to create a mindset within the organization that focuses on a “better normal” by building on what the group did right during the pandemic and enhancing the good habits formed in 2020.

“We’ve found ways to trim the fat, address inefficiencies, improve what we spend on and how we spend. We must continue to be nimble beyond the pandemic and keep learning and unlearning. And while metrics are more crucial than ever, and we will make decisions based on a lot of data, we will still leave room for intuition, in the spirit of true entrepreneurship,” Gonzalez said. INQ