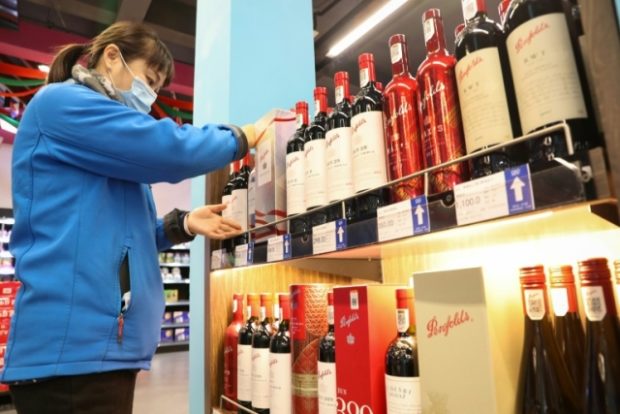 With Australia’s winemakers rethinking their future in the lucrative Chinese market, hit with painful tariffs as relations between the two countries worsen, rival producers around the world are ready to pounce.

Canberra and Beijing have been locked in a diplomatic and economic standoff for most of this year, with China hitting out at a list of issues including Australia’s call for an inquiry into the origins of COVID-19 and a ban on Huawei’s participation in the country.

The row has seen at least 13 Australian sectors hit with import levies, including beef, coal and barley — but one of the worst affected is wine, with the industry hit by two waves of tariffs in November and December.

The effect has been to double, and in some cases even triple, the price of a bottle of Australian wine in Chinese supermarkets.

It’s a serious blow to the winemakers — China is their largest market, accounting for more than a third of their exports and until recently where they were the dominant players.

But as Australian wine has become less palatable in China, new openings have emerged for domestic producers and other wine-exporting countries.

In imposing the anti-dumping tariffs, which amount to up to 212% of the goods’ value, China claimed cheap Australian imports were damaging its own viniculture industry.

Now, some observers think Chinese vineyards are about to benefit after a gloomy few years.

“Local producers have suffered from extreme weather events over much of the past three years, as well as rising imports, especially from Australia,” said Matthew Reeves, a senior industry analyst at market research group IBISWorld.

But the big winners will likely be other established wine-producing countries, Reeves added, because “the local wine industry in China will not be able to meet the demand for high-quality wine.”

China already drinks more Chilean than any other export country — and good diplomatic relations could count in Santiago’s favor too, according to Jorge Matthei, an import consultant.

The Chinese market has been a lifeline for Chile’s producers hit hard by the pandemic, he said, adding that orders from there had increased more than a third in the past six months.

And Chile is not alone in sensing an opportunity to reverse Australia’s leadership of the market, previously helped by a 2019 import tariff exemption.

In the first half of the year, for every 100 bottles of wine imported into China, 38 were Australian. Of the remainder, 26 were French, 13 Chilean, seven Italian and six Spanish.

Reeves believes all of these countries will now see their share increase.

Even U.S. producers — battered by the trade war with China that saw 2019 sales there almost halved — might also be able to leverage any potential reset under the Joe Biden administration, he added.

Mariano Larrain, owner of a specialist Chilean wine shop in Shanghai, is more cautious about the future of the market.

“I don’t really believe that Chilean wines are to going be a substitute for Australian wine, because they’re not really in the same range,” he told AFP.

The Federation of French Wine and Spirit Exporters also sounded a note of caution.

“It’s difficult to know how the Chinese market is going to evolve.” CC