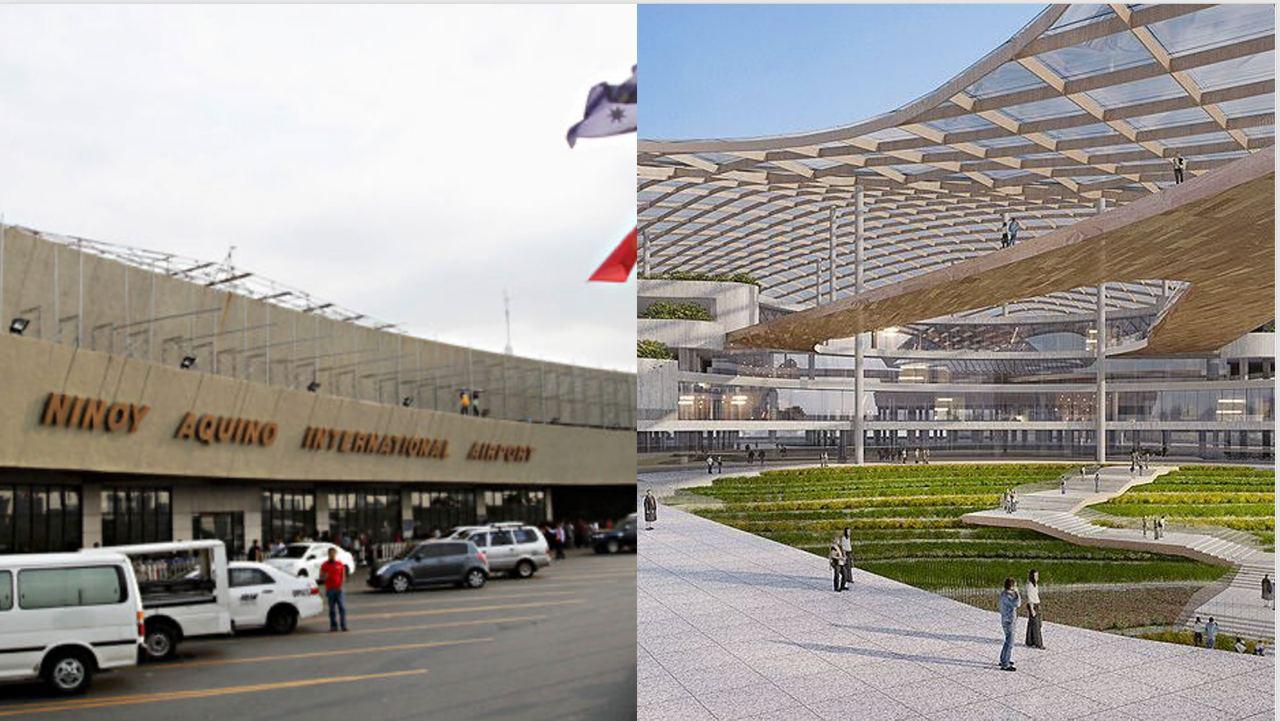 This combination photo shows a file photo of the Ninoy Aquino International Airport Terminal 1 (left) and render of Megawide-GMR’s planned improvement of the country’s primary airport. Megawide seeks “to transform NAIA from one of the world’s worst-rated to among the world’s best airports.” FILE PHOTOS

The business groups are also expressing indignation against a lawsuit that questions the legality of the partnership Megawide shares with GMR Infrastructure Inc., its minority partner in the operations and maintenance of Mactan Cebu International Airport (MCIA).

These groups decry malicious attempts to smear the only Filipino company with a proven track record in building world-class airports for the Philippines.

“We are grateful for the overwhelming support we are receiving.  This drives Megawide to work harder and even more unstoppable in delivering world-class infrastructure the Filipinos deserve,” Megawide Chairman Edgar Saavedra said.

In a letter addressed to the Department of Transportation (DOTr) Secretary Arthur Tugade on December 15, Cebu Chamber of Commerce and Industry President Felix Taguiam said Megawide has the “credibility, experience, and the drive” to deliver a topnotch airport.

“Megawide worked diligently with the Cebuanos, to achieve this dream of having a world-class gateway to more opportunities the world has to offer,” Taguiam said.

Taguiam also noted that the delivery of the new Mactan Cebu International Airport (MCIA) accelerated the transformation of Cebu into an international destination which sparked new economic growth beyond the airport.

According to Taguiam, by facilitating tourism and trade, the NAIA rehabilitation project shall surely generate economic growth, and in effect provide more jobs and increase revenues from taxes.

“Exactly what Megawide delivered to Mactan-Cebu,” he emphasized.

In a separate letter to House Committee on Transportation Chairman and Samar First District Representative Edgar Mary Sarmiento, the Mandaue Chamber of Commerce and Industry, Inc. (MCCI) pointed out that in 2018, the Chamber conferred to Megawide the award “Industry Catalyst of the Year” for “developing the key infrastructure to spur economic growth and driving industry to new heights.”

MCCI, a business support organization in Mandaue City, is composed of close to 500 companies ranging from micro to large corporations in Cebu’s Industrial Hub.

“As a major stakeholder in Cebu’s economic development, we are writing to vouch and confirm the role of Megawide Construction Corporation in the rehabilitation and improvement of the Mactan-Cebu International Airport,” MCCI President Steven Yu said.

Aside from the MCCI Chamber Award, a contract has also been vetted by no less than the Supreme Court after incontestable and undeniable success in operating and growing the MCIA. These have been more than enough reason for MCIA to recognize Megawide’s contributions through more awards and citations such as:

“It is truly heart-warming to know that Megawide has contributed to uplift the local economy, most especially in improving the lives of our countrymen in Cebu – who are very close to the heart of our dear President Rodrigo Duterte,” Chairman Saavedra said.

According to Chairman Saavedra, Megawide is still very much determined to continue working with the government to rehabilitate Metro Manila’s international gateway and will submit a motion or letter for reconsideration soon.