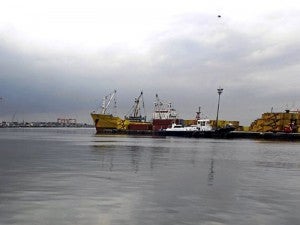 FACELIFT WORK STARTING SOON The Manila North Harbour Port Inc. will present to the Philippine Ports Authority board the North Habor’s modernization master plan this week and once it is approved, refurbishment work may start. Jay Morales/Malacañang Photo Bureau

The modernization of the Manila North Harbor may finally begin more than a year since the port had been turned over to its private concessionaire.

Philippine Ports Authority (PPA) assistant general manager Raul Santos said that plans for the refurbishment of the facility had been drawn up by Manila North Harbour Port Inc. (MNHPI), owned by the Romero family, and would be presented to the PPA board before the end of the week.

Once the master plan is approved, the MNHPI may begin to upgrade North Harbor, the country’s busiest port.

The terms of the modernization plan contract “are compliant with the contract,” Santos told reporters.

Santos is also chairman of the PPA committee formed to work with MNHPI on the master plan for North Harbor.

The PPA board is made up of representatives from the National Economic Development Authority; and the Departments of Transportation and Communications, Finance, Trade and Industry, Public Works and Highways, and Environment and Natural Resources. Also represented on the board are the Maritime Industry Authority and a member of the private sector.

The PPA said that although the 25-year contract to modernize the port had already been given to MNHPI, the designs for the new facilities to be built would still have to pass government scrutiny.

MNHPI plans to increase the port’s capacity to 5 million twenty-foot equivalent units (TEU) of cargo a year from the current 1.5 million. One TEU is the size of a standard steel container van.

Under its contract, MNHPI is supposed to spend half of its P14-billion modernization budget in the first six years following its takeover of the port. Management of the facility was handed over to MNHPI by the government earlier this year.

TAGS: government contract, Manila North Habor, ports, PPA, The modernization of the Manila North Harbor may finally begin more than a year since the port had been turned over to its private concessionaire.