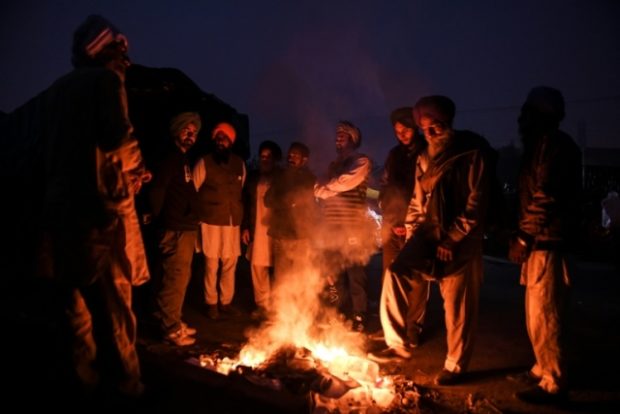 Thousands of Indian farmers are camping out in the bitter cold as they protest against agriculture reforms they fear could destroy their livelihood. Image: AFP/MONEY SHARMA.

Behind concertina wire and trucks blockading a major highway into India’s capital, tens of thousands of farmers are camping out in the bitter winter cold as they protest against agriculture reforms they fear could destroy their livelihood.

Layers of hay, mattresses and blankets are used as bedding inside the tractors and trucks, and on the road, while six months’ worth of food is piled up in trailers — signs that the farmers are resolute about maintaining the blockade until Prime Minister Narendra Modi’s government reverses course.

Pro-farmers slogans blare out from speakers at the blockade, with some protesters standing on tractors brandishing swords and spears.

“These laws are death warrants for the farmers,” Sandeep Singh, a farmer from Ludhiana district in northern Punjab state — a major agrarian region — told AFP.

“This (blockade) is the Berlin Wall but even if we have to protest for a year or two or have to face bullets, we won’t leave this site until the laws are repealed.”

At the heart of the dispute are new laws that the government says will overhaul the flailing sector by deregulating agriculture and removing state middlemen.

But farmers believe the changes could instead tilt the power balance towards large corporations. Both sides have refused to budge despite several rounds of talks.

“We do not trust the government at all. Every law they have brought previously has turned to be a disaster… They want to disempower farmers and hand over our land and lives to big companies,” Singh said.

The blockade kicked off when farmers marched from Punjab towards New Delhi on Nov. 26, sparking violent clashes with police.

The 65-year-old Singh, one of the first demonstrators, has been joined by tens of thousands of his fellow mostly Sikh farmers.

He and a dozen others drove six tractors carrying rations to the border between Delhi and Haryana state, which lies between the capital and Punjab.

Singh supervises one of the scores of makeshift kitchens where the food is cooked.

The farmers, wearing brightly colored turbans, sit cross-legged in a long line along the highway as a volunteer serves them meals prepared in huge pots.

For bathing, some use buckets filled with water and hoses connected to tankers.

At night, Singh retreats to his tractor where he updates his family back home on WhatsApp about the latest news from the campaign backed by his entire village.

“My son encouraged me to join the protests. This is a do-or-die situation for us. I am here for my future generations,” said Singh, who owes five acres (two hectares) of farmland.

Shuvaik Singh has been camping at the site from day one when police fired tear gas and water cannon on protesters.

The 75-year-old, who owns seven acres of semi-parched land in Punjab’s Patiala district, was hit by cold water from the cannon. But he is not deterred.

“We have seen droughts and famine but that never worries us. Bullets and water cannons won’t stop us either,” Singh told AFP as he gripped a modified walking stick with a crescent-shaped axe.

“These laws will reduce us to slaves, which is unacceptable. If needed I will use my weapon but won’t go back without the laws being rolled back. How will I face my family?” he asked.

NPC has no endorsement for 2022 polls yet —Escudero