The culture of waste

“For most, the garbage crisis is limited to its collection. As long as the mounds of garbage are removed, it is a problem out of sight and out of mind.” (The Garbage Book, Solid Waste Management in Manila, Asian Development Bank 2004).

This has been the overriding mentality of some developed countries who ship their hazardous waste to developing countries like the Philippines. We will recall the over 5,000 metric tons of hazardous trash from South Korea placed in 60 container vans under the guise of recycling. Fortunately, the trash has been sent back to South Korea. Another dumping issue is the one involving Canada when it shipped 69, originally 102 containers with nonrecyclable plastic, wastepaper, household and electronic waste, and used adult diapers. It was finally shipped back to Canada after six years and only after President Duterte ordered the Philippine ambassador and senior diplomats recalled from Canada.

What these developed countries have done is not much different from what individuals in smaller communities do. As long as their garbage is not within their property it is all right. They feel it is justifiable to dump their trash in vacant lots or worse, their neighbor’s garbage bins. 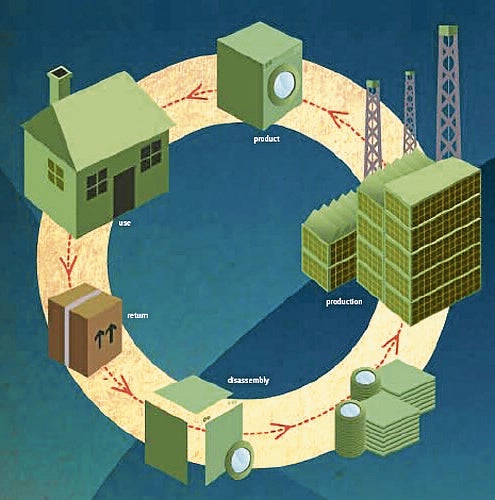 Cradle-to-Cradle concept refers to a system wherein the waste products of one process become the raw material of another process. —SOURCE: CATALYST

What is it with garbage that makes people behave irrationally? And yet we all create waste. As a country develops, its waste generation increases. The waste problem is so monumental that experts believe we are all part of what is referred to as the culture of waste.

What do we mean by culture of waste? Let us first define culture. One definition states that culture is the customary beliefs, social forms and material traits of everyday existence shared by people in a place or time.

The problem with waste affects both rich and poor countries because we are all part of the “throw-away” society, wherein we buy packaged products that are often used just once and we throw away what we no longer want. With the ongoing pandemic, they say that there is less trash in public establishments like stores and restaurants. On the other hand, more people are now resorting to buying online which means buying products that need extra packaging for the transport of goods, in the end producing more trash than conventional shopping.

Our wasteful lifestyle can have serious environmental impacts. More waste means bigger landfills that need more land area. Landfills also generate toxic liquids called “leachate” which is the liquid oozing or trickling through the mounds of garbage and is generated from liquids present in the waste and from outside water including rainwater. This liquid then seeps through the ground reaching the water table or aquifers and eventually poisoning our rivers, lakes, and seas. This has been going on for so long now.

Landfills also cause air and soil pollution including the emission of greenhouse gases, while incineration results in emissions of dangerous pollutants.

There is one major concern that all countries may be accused of being contributors. And that is what they call the Great Pacific Garbage Patch. It is in the Northwest of Hawaii and is bigger than Texas. Weighing more than an estimated 3 million tons, of which around 80 percent are tiny pieces of plastic, the garbage patch is a flotsam trapped by air and ocean currents. A similar occurrence is taking place in the North Atlantic Ocean.

What other countries are doing? In Singapore, after collecting and recycling waste, recyclables are sorted and retrieved for further processing. The remaining solid waste is collected and sent to the waste-to-energy plants for incineration. Incineration reduces the volume of solid waste by about 90 percent and produces steam that runs turbine-generators to generate electricity.

In Taipei, yellow garbage trucks blasting classical music collect trash several times a week in 4,000 pickup spots using mobile apps that let users track the trucks and alert them whenever a garbage truck is nearby. These trucks are followed by open-bed recycling trucks where people toss their garbage based on general refuse, raw food waste, plastic, and paper.

Another way to address the problem of waste is what they call the circular economy. It refers to the way products are made by extending the product life cycle by using durable and longer lasting materials that can be repaired and reused at the end of their life cycle.

This refers to a system wherein the waste products of one process become the raw material of another. This was developed by Architect McDonough who adopted a comprehensive Cradle-to-Cradle design protocol to chemical benchmarking, supply-chain integration, energy and materials assessment, clean-production qualification and sustainability issue management and optimization.

Buildings in general—from construction to operation—are responsible for millions of tons of waste. Typically, the waste from these activities include concrete, bricks, metal, wood, plasterboard, asphalt, rock, and soil. This waste goes into landfills and the rest are recycled, illegally dumped, reused, or reprocessed. Dumping waste in landfills is not the solution to this problem because of the high social, economic, and environmental costs.

Green construction aims to use recyclable construction materials to reduce disposable costs and carbon emissions. It also helps to comply with environmental laws and restrictions on what can be dumped in landfills. Badly designed homes and buildings (not referring to their aesthetic traits) are major waste contributors. This is due to the type of inferior materials and systems installed which are constantly in need of costly maintenance. These buildings are not energy and water efficient, which is another form of waste.

Today, more than ever, we need more green developments and green buildings that minimize their impact on the environment.

It is time to implement this decades-long ecological solid waste management program which is tasked to provide information, mandates segregation and recycling of solid waste, provide management boards at the provincial, city and municipality levels and formation of environmental cooperatives in every local government.

The author is the principal architect of A.P de Jesus & Associates-Green Architecture and vice chairman of the Philippine Green Building Initiative. For comments or inquiries, email [email protected]