See lives get better as access to finance improves 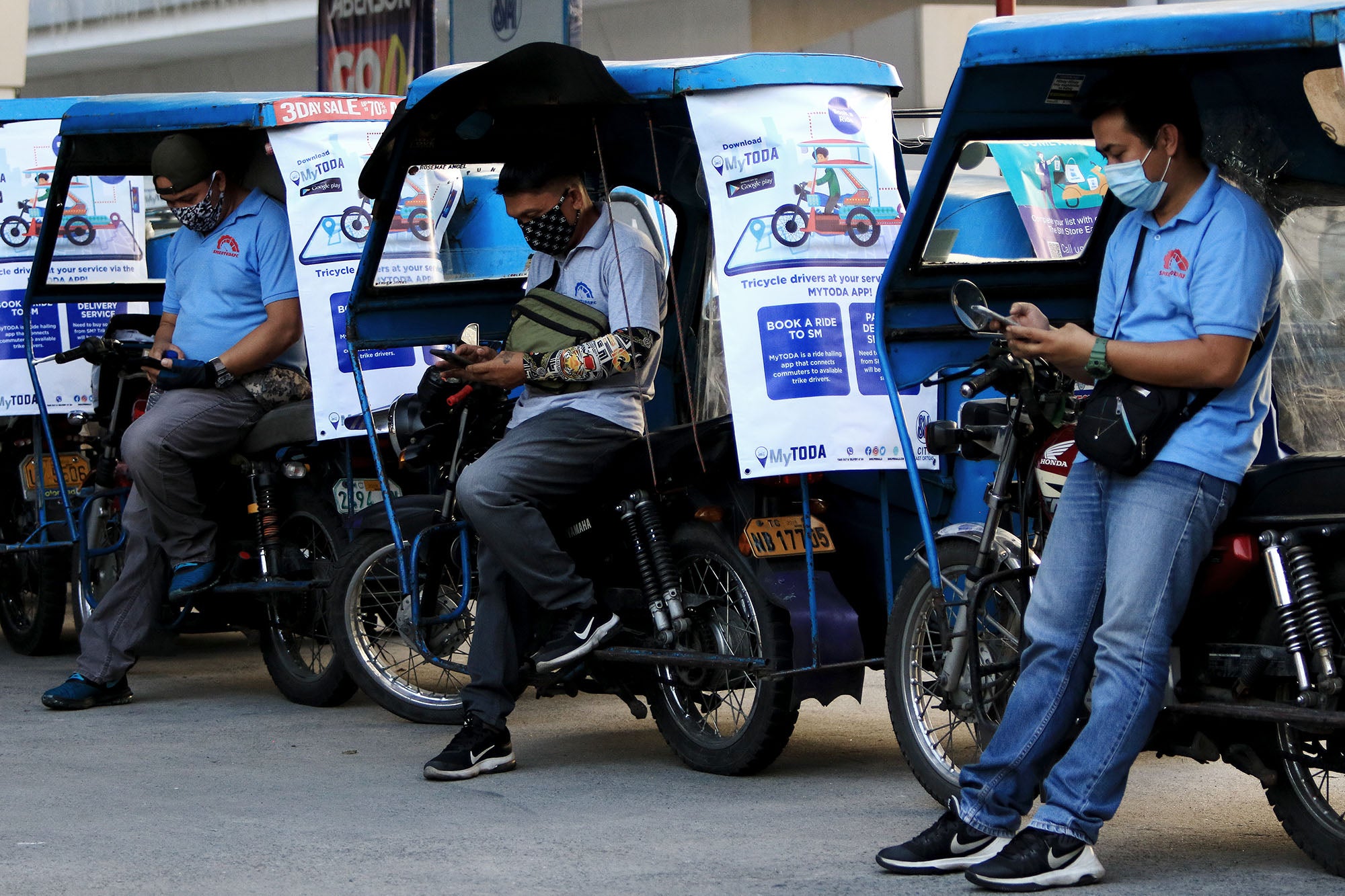 INNOVATION A tricycle driver checks for a booking on the newly launched MyTODA app in SM City East Ortigas in Pasig City. The app is a tricycle ride-hailing that aims to help displaced tricycle drivers during the quarantine economy by means of connecting commuters to available trike drivers easily. An Asian Development Bank study says that tricycle drivers who have secured fintech loans to buy their units generate more income and savings. —RICHARD A. REYES

Tricycle drivers who have secured fintech loans to buy their units recently generated more income and savings as they became more responsible with their finances—highlighting the benefits that innovation and technology enhancing access to financing will bring to small businesses in the Philippines, according to the Asian Development Bank (ADB).

The ADB this month published the third chapter of its Asia Small and Medium-Sized Enterprise Monitor 2020 report, with the thematic chapter zeroing into the results of the loan program extended by Japanese fintech solution provider Global Mobility Service (GMS) to some tricycle drivers across Metro Manila last year.

In its two prior reports on Asian micro, small and medium-sized enterprises (MSMEs), the Manila-based multilateral lender noted that “access to finance is a chronic barrier for MSMEs to survive and grow” in the Philippines, even prepandemic.

In 2019, bank lending to MSMEs cornered a mere 6.1 percent of the domestic banking industry’s total portfolio, sustaining a small single-digit share since 2013, the ADB said.

Distributive tradeThe pandemic-induced recession aggravated this lack of access to MSME financing—the ADB found that nearly half or 47.5 percent of the country’s entrepreneurs “used their own funds/retained profits to survive” in March and April when 75 percent of the Philippine economy stopped after the government imposed the most stringent COVID-19 lockdown in the region, which shut down thousands of businesses and shed millions of jobs.

This was unfortunate as MSMEs comprised 99.5 percent of all enterprises in the country, while employing up to 63.2 percent of the labor force based on 2018 government data.

The ADB report noted that in the Philippines, over four-fifths of MSMEs were “engaged in services, especially distributive trade.”

According to report authors Hyuncheol Bryant Kim, Syngjoo Choi, Shigehiro Shinozaki and Siho Park, the study they conducted together with GMS as well as tricycle operators and drivers’ associations compared those who had availed themselves of fintech loans with conventional drivers in Manila and Quezon City.

In all, they surveyed 2,487 tricycle drivers aged 18 to 79, with the majority of them males and married.

“There were differences between fintech and conventional drivers. Fintech drivers with access to loans through GMS were slightly younger. In terms of family background, they were more likely to be married and have more household members. They were also more likely to have moved to the NCR (National Capital Region) from a different province, probably in search of work,” the authors said.

While the study was conducted in 2019 or before the pandemic struck, “the results emphasized the importance of fintech for the self-employed—like tricycle drivers—in making it through the pandemic and maintaining a new normalcy,” the ADB said.

In particular, “the comparison between fintech and conventional drivers showed fintech drivers have more risk appetite, rationalize their working hours more, and earn much higher income than conventional drivers. They have relatively higher access to financing sources with good financial plans and goals, while facing a large obligation to loan repayments,” according to the ADB report.

Also, “bank account ownership [with debit card] is higher among fintech drivers, but credit card and mobile banking as well as online shopping are not often used. They save, but mostly using cash-at-home and through informal savings groups; few use formal financial institutions to save,” the ADB said.

Constant monitoringAccording to the ADB, “fintech loans based on the IoT (internet of things) device as such provided by GMS is promising to enhance financial access for the self-employed or sole proprietorship—especially those in transportation and logistics—and to ensure their business survives under the new normal with improved living standards and social welfare.”

“Constant monitoring of repayment condition as well as working behavior using the IoT device will enable lenders to mitigate borrowers’ asymmetric information and allow the borrower to access more readily working capital. This will benefit particular business sectors of the self-employed such as transportation, logistics and delivery services,” the ADB said.

Citing the survey results, the ADB added that fintech loans will allow small businesses to “enjoy a more frugal lifestyle with higher savings and planned expenditures, and can open accounts in financial institutions” because “familiarity with fintech loans or digital financial services will stimulate more e-commerce and entice a digital transformation of their business to fit new business modalities in a post-COVID-19 world.”

But despite the viability of fintech loans and digital financial services for self-employed Filipinos just like the GMS-financed tricycle drivers showed, the ADB flagged some challenges to tapping these sources of financing.

For instance, the ADB noted that “the surveyed drivers with fintech loans tend to hesitate when accessing new loans due to the large repayment burden on ongoing tricycle loans.”

“But they are relatively good at financial planning and goal-setting. If they receive appropriate business advice and development services, they may qualify for other types of fintech loans and increase access to formal financial services,” according to the ADB.

The ADB said “financial education is an essential component to promoting digital financial services for the self-employed or sole proprietorships” as “it allows them to better understand loan conditions and value-additions to their business [and lifestyle] by accessing technology-based loans.”

“According to the baseline survey, less than 10 percent of drivers were aware of their loan interest rates, suggesting the majority of drivers do not understand how loans work. This may increase default risk among tricycle drivers; they need the appropriate knowledge on financial instruments, including digital finance, which they can learn through training programs by government, private sector, or financial institutions,” the ADB said.

“The tricycle drivers surveyed were mostly male, but to a certain extent, spouses or female partners drove decision-making on how money was used. Financial education and training involves both business owners and their life partners,” the ADB added.

For the ADB, “designing a fintech loan that satisfies the demand and business/life conditions of the self-employed is key for promoting digital financial services to them.”