Books as business? For indie online sellers, it's the cause that counts | Inquirer Business
Close
menu
search

Books as business? For indie online sellers, it’s the cause that counts 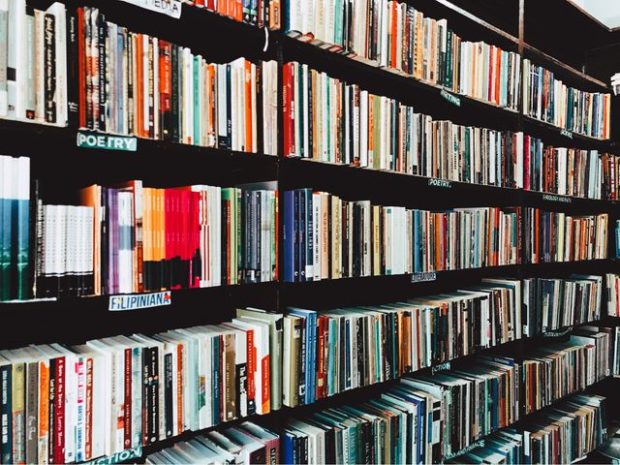 On the Facebook pages of online bookshops and booksellers, one is sure to find comment sections humming with activity, of unblinking buyers feverishly commenting “mine!” and “next!” faster than a falcon diving for prey.

When the COVID-19 pandemic hit and lockdowns were declared in the country in March, establishments large and small shuttered doors to customers. These included bookshops that once teemed with life.

It seemed difficult then to anticipate just how grave and far-reaching the pandemic’s effects would be, and it remains difficult now, eight months on. While some might think that the effect of the pandemic on the business of online and independent bookshops ought to be less hurtful than it has been for huge bookstore chains – these establishments deal with bigger stocks and have employees to look after, after all – small online and indie sellers actually suffer in their own unique and unforgettable ways.

But they have been coping and trying to get back on their feet. And the perseverance they are pouring into it is reminiscent of the energy of their most loyal bidders and buyers.

This online seller, which also owns a small bookshop on Maginhawa Street in Quezon City, saw a sudden drop in sales and walk-in customers when the lockdown started.

The proprietor Roel Abaya told INQUIRER.net that these were the most challenging times they encountered amid the health crisis. Abaya is currently based in the United States, so his wife run the daily operations of the business. One of the adjustments they had to make, he said, was shortening the physical store’s opening hours to comply with the local government unit’s mandatory curfew.

Roel’s Bookshop is new to the scene of physical independent bookshops. Abaya has been selling books online since 2009, but the bookshop on Maginhawa Street did not materialize until 2018. Now that the pandemic has affected the ingress of walk-in customers in his bookshop, Abaya has made the decision to go back to his roots: online.

While the bookshop maintains a Facebook page where customers both new and old can call dibs on new acquisitions, they have also invested in their own website, which is in the works.

“We are still doing okay and we’re able to pay our bills on time. We invested a decent amount of money to have our own website [which has been] under construction since March so we can reach out to more customers,” Abaya said. “To sell more books, we are uploading new titles twice a week for online [customers].” 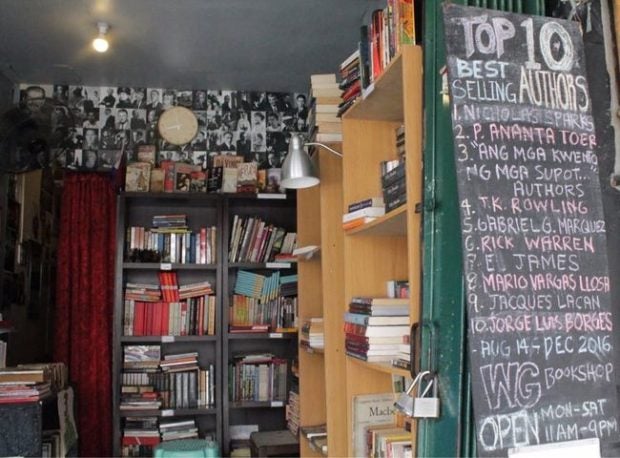 No rent! This was the advantage of operating online during the pandemic, according to Wise Guys’ Bookshop, another independent bookstore in Metro Manila.

Wise Guys’ Bookshop, put up by four friends from the Polytechnic University of the Philippines, has been selling books on its Facebook page since 2014. In 2016, the four friends took the plunge and put up a physical bookshop along Teresa Street in front of PUP, but due to various commitments, decided to close the store in 2018.

The bookshop initially observed that their sales increased during the first two months of the lockdown. They surmised that, perhaps due to the current circumstances, readers now have more time for reading. But these last couple of months showed the opposite, as they noted that the sales have since dwindled.

Apart from a decrease in sales, another challenge they encountered amid the pandemic are unsold books due to delays from couriers.

(We can’t sell the items from our other site in Central Luzon due to delays from couriers. Only the items in Metro Manila are the ones that get distributed first to their buyers. According to the buyers, they also have a hard time paying through remittance centers because of the checkpoints due to the lockdowns.)

The Wise Guys’ Bookshop, along with Roel’s Bookshop, did not increase the prices of their books amid the pandemic. Both sellers even lowered the prices of some of their selections despite the drop in sales. The reason was simple.

(How would we be different from the big bookstores if we would jack up our rates? Since we also love to read, our goal is to encourage and to promote the culture of reading, even more so during these times.)

From seller to sharer

In the case of another independent bookseller based in Quezon City, she had to make the hard decision to cease operations indefinitely when COVID-19 happened.

According to the bookseller (name withheld upon request) she has not been able to add more books to her collection since the lockdown in March. She also experienced difficulty in getting orders due to delays in shipment.

“I am still keeping some books for customers I am unable to serve due to the COVID situation at their locations. Some also do not mind delaying shipment because safety is their priority. It doesn’t matter if they have paid or not. If they expressed their continuing interest to acquire the book, I keep it for them,” the seller said.

“Since it doesn’t generate income at the moment, I have sought income elsewhere like by doing freelance writing jobs and other smaller side hustles,” she confided.

Closing the online bookshop indefinitely seemed the practical decision to make, yet also one that is not without its pains. The bookshop remains a huge part of her life, she said, and making the choice to keep it closed led to a personal, existential crisis. For now, the online page of the bookshop has been turned into a booksharing page.

“I decided that bookstores are not just about selling books; they also serve to educate the community by being the bridge by which books can reach the people who need to read them,” she said. “My goal is to reach readers and non-readers alike. Today, we are gifted with the technology to make that possible and that is why I am working to keep [the bookstore] running even though I do not upload books anymore.” 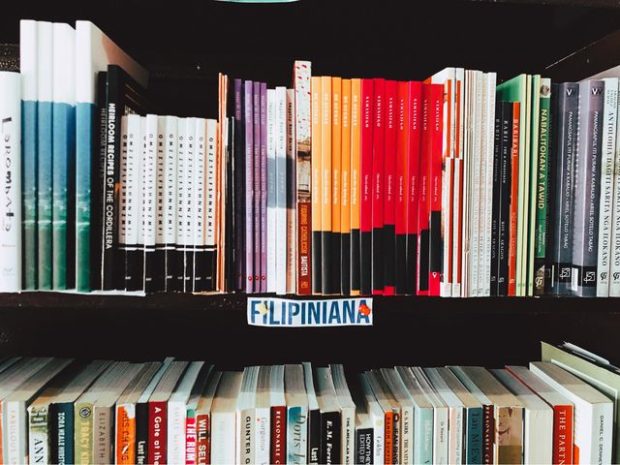 To tax or not to tax

The blow of the pandemic was felt especially hard among micro, small and medium enterprises (MSMEs) in the Philippines. By April 29, more than half or 52.66% of MSMEs in the country had entirely ceased or closed operations due to the pandemic, according to the Department of Trade and Industry. In Metro Manila, 76% of MSMEs were reported to have ceased operations; some 22% continued with limited operations, while only 2% continued to fully operate.

The reduced mobility in cities due to the pandemic has made physical stores inaccessible for most of the general public, but this in turn benefitted the industry of e-commerce in southeast Asian countries. The lockdowns have increased online consumer activity, according to Lee Ju Ye and Chua Hak Bin, analysts of Malaysian financial giant Maybank, last April 20. This apparently was a similar occurrence during the severe acute respiratory syndrome (SARS) outbreak in 2003, which became a critical moment for China e-commerce companies Alibaba and JD.com to flourish.

However, at the height of the pandemic on June 1, the Bureau of Internal Revenue issued Revenue Memorandum Circular No. 60-2020, which pressed unregistered businesses, including online sellers, to register their business activities, declare past transactions and settle their taxes by July 31.

Several lawmakers at the time thumbed down BIR’s directive, with Sen. Sherwin Gatchalian calling the move to tax online sellers “ill-timed” and “insensitive” in the middle of COVID-19. Senators Risa Hontiveros and Joel Villanueva said the BIR should focus instead on the unpaid taxes of Philippine offshore gaming operators.

The independent and online bookshops INQUIRER.net interviewed, all of which fall under micro to small enterprises, expressed similar sentiments when it came to the taxing of online sellers amid the pandemic.

(There should be a moratorium on all plans for additional taxes to be imposed by the government. It should focus more on how to fight the coronavirus and bring down the infection rate in the country.)

Wise Guys’ Bookshop also said it was clear that taxing online sellers during the health crisis would be an added burden for Filipinos just trying to get by.

(For small entrepreneurs, this is clearly additional burden for us who try so hard to get by with dignity at a time when the economy is at its lowest point. This will all the more push Filipinos into the quicksand of poverty.)

As for the lady bookseller, she said the government should reward and support its citizens instead of taxing them.

“We cannot all sell our merchandise on the street. And we cannot do this during a time of pandemic. The internet has become a refuge for people who have not found options elsewhere and the government’s encroachment on that space is a threat to people who are already helping the economy breathe a bit,” she explained.

“A government that chooses to further tax its citizenry for activity that helps the nation is a vampire drinking its victim’s blood,” she added. “They must pursue authentic tax reform before they should even have the gall to come after small people who are only trying to survive.” 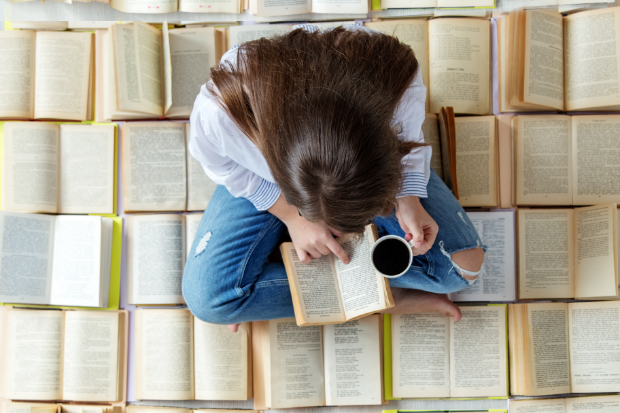 The COVID-19 pandemic has inescapably led to a surge in the use and application of digital technologies in daily living. Distance learning, remote work, telemedicine, digital banking, online shopping and entertainment, among others — these, regardless of its pains, would have to be the new reality for most people for an indefinite amount of time.

One might fear or wonder about the place of books and the fate of independent booksellers and shops amid the pandemic and digitization, but the answer almost seems too obvious: they’re here to stay.

“If you buy books from indie booksellers, you’re not only infusing money to the local economy, but you are reigniting more passion to the trade,” said Abaya. “You are giving hope for booksellers to continue, to plan to expand and propagate a strong reading culture.”

Wise Guys’ Bookshop, on the other hand, said that books sold in large bookstore chains are usually overpriced. It also emphasized the importance of independent bookshops to local authors.

(The production of literature is affected, as well as the production of knowledge in the Philippines in that aspect. That’s why indie bookstores are important for the entire country. Here, our local authors get to have a venue [for their works] without being taken advantage of. It is in indie bookstores where we can see the literature in the Philippines.) JB

From 24/7 service to ‘estero-telling’: Checking up on the state of public libraries