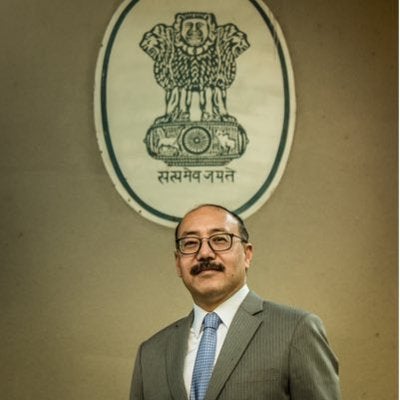 While an Indian maritime analyst is believed to have used the term as far back as the 1990s, “Indo-Pacific” is a fairly recent addition to the geopolitical lexicon. It has come into prominence in the past decade. India has used it in joint statements with a series of partner countries, including but not limited to the United States, Australia, France, Indonesia, Japan, and the United Kingdom. It figures in our meetings with our ASEAN friends and has helped advance the Quad consultations.

I hope to explain to you India’s approach to this critical geography. To do so, I will focus on the where, why, how and which, and who of our Indo-Pacific vision. In other words:

iii. How do we work in the region and which institutions and platforms do we find most convenient?

India has not just mainstreamed the expression “Indo-Pacific”, but more substantially, it has encouraged others to perceive and define the region in its full extent. For India, the Indo-Pacific is that vast maritime space stretching from the western coast of North America to the eastern shores of Africa. Today, more and more countries are aligning their definition of the Indo-Pacific with ours.

To understand India’s Indo-Pacific vision it is important to understand why we define it the way we do, and to the extent we do. During the Cold War, the Indo-Pacific was sliced and diced into different spheres of influence and military theatres, and made subservient to bloc think. To India, this made little sense. Whether it was the forces of nature – the monsoon winds for instance – or our maritime and trading history, we found it impossible to see the Horn of Africa and the western Indian Ocean on the one hand and the Straits of Malacca on the other as disconnected. For us, they have always been a seamless whole.

There are many reasons for this. The first and most obvious is the Indian peninsula, which thrusts into the Indian Ocean and gives us two magnificent coasts and near limitless maritime horizons to both our east and our west. Monks and merchants, culture and cargo have travelled from India on those waters, to our east, west and south.

India’s great religious traditions, such as Buddhism, spread far and wide in the Indo-Pacific. Some of the oldest and most impressive Hindu temples are found in Vietnam, remnants of the Cham kingdom. A thousand years ago India’s greatest coastal empire, the Cholas, sent maritime expeditions and trading ships as far east as Sumatra, to ancient China, as well as to the Abbasid empire in what is today Iraq. Another empire, the Pallavas, had a flourishing trade relationship with Southeast Asia. Sea-borne trade with Africa and with the Gulf states have been constants of Indian economic life. These experiences are our past and are our future; these experiences determine our concept of the Indo-Pacific. 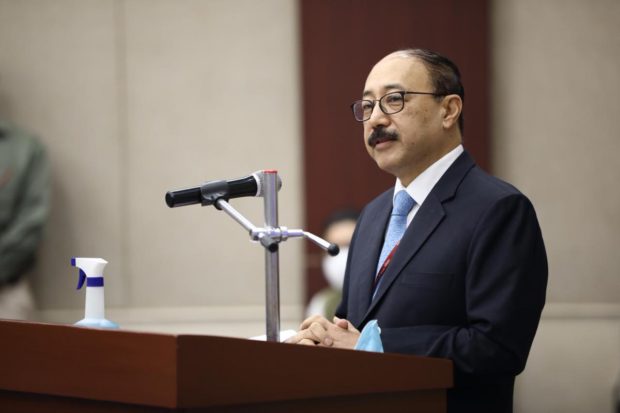 India’s Indo-Pacific strategy was enunciated by Prime Minister Narendra Modi in a speech in Singapore in 2018 as the SAGAR doctrine. In Sanskrit, among other Indian languages, the word “sagar” means ocean. The Prime Minister used it as an acronym for “Security and Growth for All in the Region”. This aspiration depends on securing end-to-end supply chains in the region; no disproportionate dependence on a single country; and ensuring prosperity for all stakeholder nations. An Indo-Pacific guided by norms and governed by rules, with freedom of navigation, open connectivity, and respect for the territorial integrity and sovereignty of all states, is an article of faith for India.

In 2019, at the East Asia Summit in Bangkok, Prime Minister Modi took the idea of SAGAR further and announced the Indo-Pacific Oceans’ Initiative. Using this Initiative, India plans to support the building of a rules-based regional architecture resting on seven pillars. These are:

India has acted on these principles through both thematic and geographical initiatives. We have sought to strengthen security and freedom of navigation in the Indo-Pacific by becoming a net security provider – for instance in peacekeeping efforts or anti-piracy operations in the Gulf of Aden. Sharing what we can, in equipment, training and exercises, we have built relationships with partner countries across the region. In the past six years, India has provided coastal surveillance radar systems to half a dozen nations – Mauritius, Seychelles, Sri Lanka, Maldives, Myanmar and Bangladesh. All of these countries also use Indian patrol boats, as do Mozambique and Tanzania.

Defence training programmes have increased. Mobile training teams have been deputed to 11 countries – from Vietnam to South Africa, as well as Sri Lanka, Bangladesh and Myanmar in our immediate neighbourhood. Located just outside New Delhi, the Indian Navy’s Information Fusion Centre for the Indian Ocean Region has enhanced maritime domain awareness among partner countries.

In the area of humanitarian assistance and disaster relief (HADR), India has not only built robust capacities it has also established itself as an instinctive and unstinted early responder and a credible friend. Notable HADR missions in the Indo-Pacific in recent years have included Operation Rahat in Yemen in 2015 – when India rescued and evacuated 6,710 persons, including 1,947 citizens of over 40 other countries. Whether it was the cyclone in Sri Lanka in 2016, the earthquake in Indonesia in 2019, Cyclone Idai in Mozambique, or the flooding, landslides, deaths and large-scale displacement of people that occurred in Madagascar in January this year, Indian assistance and an Indian ship have never been far away.

The Coalition for Disaster Resilient Infrastructure (CDRI), co-founded by India and the United Kingdom in 2019, is a corollary to such efforts. Along with the International Solar Alliance, another institution co-founded by India to evangelise renewable and specifically solar energy, CDRI is intrinsic to India’s regional and global commitment to taking on climate change.

As the Covid-19 pandemic hit us earlier this year, India did what it could to support its friends. Rapid response medical teams were sent to countries as far apart as Kuwait and the Maldives, and on their request. Through the lockdown, food supply lines were kept alive for the Gulf nations as well as for smaller island states such as Mauritius, Seychelles, Madagascar and Comoros.

India has also promoted and contributed to infrastructure, connectivity, economic projects and supply chains in the region, always prioritising the needs of the host community and the ethic of equity, environmental sustainability and social viability. I would go to the extent of suggesting that we have pioneered progressive thinking on such issues. Reading Germany’s recently-released “Policy Guidelines for the Indo-Pacific Region”, I was struck by the prescription that, “When developing connectivity, it is important to facilitate fair competition, to avoid over-indebtedness on the part of the recipient countries and to ensure transparency and sustainability.” These are exactly the principles India has been upholding and I am glad others are sharing our prism.

We must not forget that many countries of the Indo-Pacific have suffered a history of colonialism, some of the wrinkles of which are still with us and still need to be ironed out. While doing so, and while moving ahead purposefully, we need to be mindful not to embrace constructs that themselves create dependencies and skewed arrangements. These concerns are particularly relevant as the Indo-Pacific region puts its mind to supply chains resilience and diversification in the post-coronavirus period. India is a party to several such conversations. For example it is working with its Japanese and Australian friends on the Supply Chains Resilience Initiative.

India’s Indo-Pacific geography can perhaps be best described as a succession of semi-circles. The innermost semi-circle incorporates our closest neighbours. These are South Asian countries that share with us the waters of the Indian Ocean, that have shared our civilisational and cultural heritage, and that, by way of proximity, inevitably share our joys and our sorrows. The arc of the outer neighbourhood covers the Gulf states to our west and Southeast Asia and the ASEAN countries to our east. In a sense, this too is a rediscovery of old maritime associations, but contemporary business and trade, energy and investment flows, and labour and skills mobility have added new dimensions. Economic currents in the United Arab Emirates or Singapore, for instance, are carefully monitored by millions of families in India.

Moving further, India has created partnerships and mechanisms with countries the opportunities, concerns and stakes of which intersect with ours. This is a broad sweep, from the Pacific Islands to the archipelagos of the western Indian Ocean and off the eastern coast of Africa. Networks such as Quad, with India, the United States, Japan and Australia as participants, and the India-Japan-US, India-France-Australia and India-Indonesia-Australia trilateral arrangements offer cases in point.

Military and HADR exercises, whether bilateral or multi-country, open avenues. So does cooperation on the protection of global marine commons as well as on issues such as illegal, unregulated and unreported fishing – very damaging to the ocean’s ecology. The Mauritius oil spill of August 2020 saw India and France responding together to assist local authorities.

While such networks, coordination mechanisms and complementarities have their utility, the centrality of ASEAN resonates with India’s idea of the Indo-Pacific. By virtue of its location, its longevity and its social and economic attainments, ASEAN has emerged as a platform where various interests can meet, interact and rationalise differences. These qualities are not to be discounted, and it should be our collective endeavour to preserve them. However, it must also be acknowledged that institution formation in the Indo-Pacific is still at an incipient stage. It took the shock of two World Wars in a generation for the Atlantic consensus to be formalised and institutionalised. It is possible that the after-effects of the pandemic, the biggest disruption to the global system since World War II, could nurture similar approaches in the Indo-Pacific.

Today a country like Germany, physically distant but an economic stakeholder in the Indo-Pacific, has released a strategy for the region. After France and the Netherlands, it is the third European country to do so. In India, we have noted with some satisfaction that our policy outlook has much in common with these documents. Whatever the navigation map, the fact that the Indo-Pacific is the 21st century’s locus of political and security concerns and competition, of growth and development, and of technology incubation and innovation is indisputable.