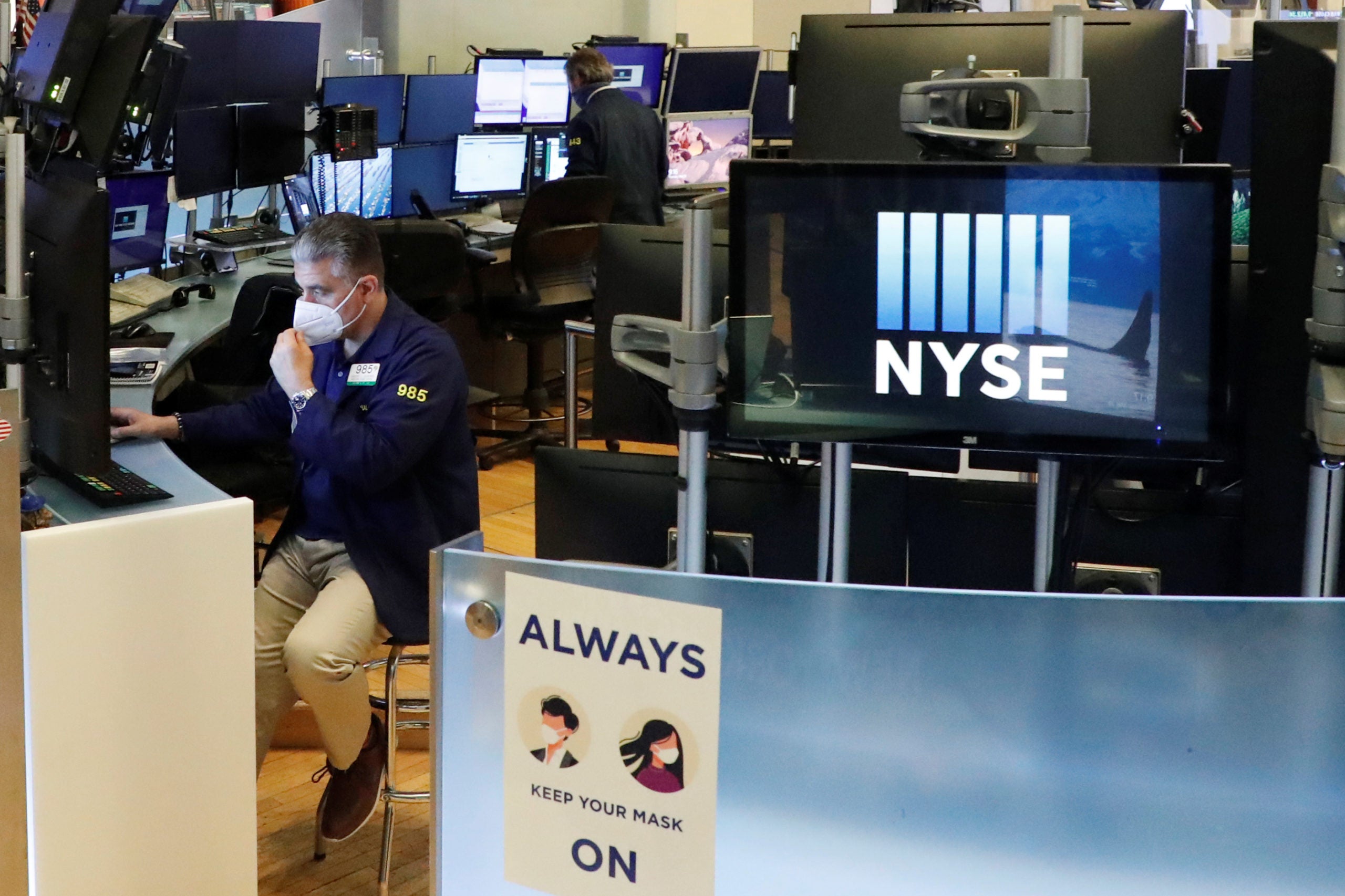 FILE PHOTO: A trader adjusts his mask as he works on the floor of the New York Stock Exchange as the outbreak of the coronavirus disease (COVID-19) continues in the Manhattan borough of New York, U.S., May 28, 2020. REUTERS/Lucas Jackson

Pharma stocks also received a boost after the November 3 U.S. elections made clear there would be no overwhelming Democratic sweep, an outcome some investors feared could prompt a major overhaul of drug pricing.

Still, many are reluctant to sound an all-clear on the industry, which is trading close to its biggest-ever valuation gap against the S&P 500 based on forward price-to-earnings ratios, according to Refinitiv Datastream.

Among the issues on investors’ minds is whether Democrats can secure a slim margin in the U.S. Senate if their candidates win run-off races in Georgia scheduled for January, a result that could spark volatility throughout the healthcare sector.

Beyond that, pharmaceutical stocks continue to face pressure from concerns over lawmakers’ efforts to bring down high drug prices, investors said.

“That is an area where you can quickly get to some sort of bipartisan agreement,” said Les Funtleyder, a healthcare portfolio manager at E Squared Capital.

Shares of the two biggest pure-play pharma companies by market value, Merck and Pfizer, have fallen 10% and 3%, respectively, this year.

“Big pharma names have underperformed, and look cheap relative to historical valuations and the market overall,” said Jim Shanahan, an Edward Jones analyst who covers Berkshire. “These are large, dominant companies in an industry that has demonstrated strong, long-term growth.”

Investors say pharma stocks have also lagged because many top-selling products are slated to lose patent protection in the coming years, including Abbvie’s blockbuster Humira.

“As you get within five years of patent expirations, people start to look and get more nervous about growth prospects,” said Marshall Gordon, senior healthcare analyst at Clearbridge Investments.

Another factor hurting pharma’s performance, said Jared Holz, healthcare equity strategist at Jefferies, is that the stock market currently is dominated on a given day by either a trade favoring big tech, stay-at-home stocks, or a trade favoring economically cyclical stocks.

Pharma does not fall into either of those categories, Holz said, so “they seem to underperform irrespective of what the broader markets are doing.”

At the same time, he said, the stocks “are trading at such a meaningful discount on an absolute and relative basis that they are intriguing almost solely due to that.”

Read Next
PH keeping systemic risk at bay, but market regulators call for continued vigilance
EDITORS' PICK
Pru Life UK receives four golden arrows for solid corporate governance
Malls adjust ‘NCR Plus’ operating hours for April 12-30 MECQ
Speed up your game with the new vivo Y20s [G]
Pre-order the new vivo Y20s [G] to get a free TWS earphone
‘NCR Plus’ to be under MECQ starting April 12 until April 30 — Palace
Metro Manila to have shortened curfew hours from 8 p.m. to 5 a.m. under MECQ
MOST READ
Stop ‘creeping occupation’ of ‘militia’ boats in WPS, Pacquiao asks China
Bea Alonzo clarifies status of her relationship with Dominic Roque
Convicted former aide of Sen. Bong Revilla dies — BuCor
Locsin to China: ‘Then move out’
Don't miss out on the latest news and information.