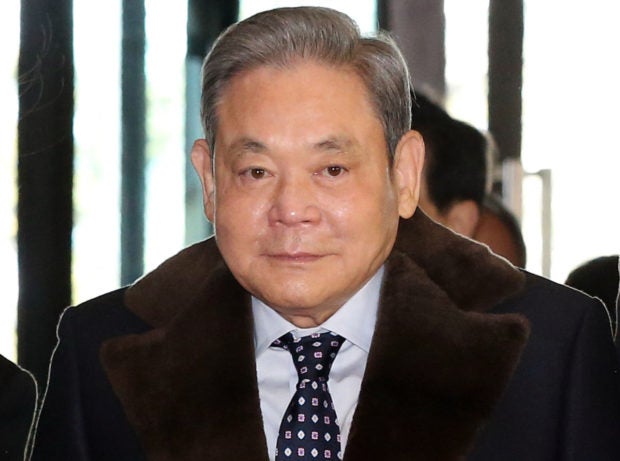 SEOUL — Boosted by the recent surge in stock prices of Samsung Group affiliates, the stockholding value of the late chairman Lee Kun-hee has surpassed the 20-trillion-won ($18.07 billion) mark for the first time, data showed Tuesday.

According to data compiled by a local corporate tracker Chaebul.com, the accumulated stock value of the late chairman came to some 20.08 trillion won as of Monday, soaring about 14 percent from some 17.62 trillion won at the end of last year. Lee passed away last month after six years of hospitalization.

The late chairman’s stocks have not been passed on to his children and his wife yet as they try to manage the huge amounts of inheritance tax involved. The Samsung family heirs are subject to a 60 percent tax rate on the inherited stocks under the nation’s tax and antitrust rules.

The chairman has remained South Korea’s biggest stockholder since 2009.

Lee held a 4.18 percent stake in the flagship Samsung Electronics, along with another 0.08 percent share in the firm’s preferred stocks. His stakes in Samsung Life Insurance and Samsung C&T were 20.76 percent and 2.88 percent, respectively. Lee also held a 0.01 percent stake in the information technology unit Samsung SDS.

“To put it simply, when Samsung Electronics stock rises by 100 won per share, the amount of inheritance tax increases about 15 billion won. With the calculation, the sharp rise of Lee Kun-hee’s stock value has put more pressure on Lee Jae-yong,” said an industry official who wished to remain anonymous.

“However, it can be good news to investors, thanks to the surge in the shares. As the chance for more allocation to shareholders (to secure funds) increases, the tech giant stock has become more attractive investment destination for stock investors.”