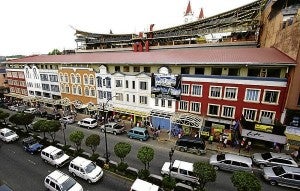 BAGUIO CITY—Some of the walls of the Catholic Church’s biggest downtown properties may be toppling down this month, but that’s part of the church’s plan to improve the Puso ng Baguio building and “bring fresh investments to downtown Session Road.”

The church has undertaken the city’s biggest property development to date, infusing P40 million to upgrade the old commercial building which was originally put up in the 90s to hold back the eroding hill where the Baguio Cathedral stands, says Fr. Lorenzo Abela Jr., Porta Vaga chief operating officer.

Some of the old building walls have been torn down to widen store spaces, or elevate the ceilings. The building itself is being re-modeled so it becomes integrated with the upscale Porta Vaga, which was built and opened in 2002.

Passersby, who have become curious about the construction there now read a sign that says: “Sorry for the inconvenience, but we promise to bring back the magic of Session Road.”

That’s not an idle boast.

Session Road used to be the center of homegrown enterprises until the beginning of this century, when a popular mall began to draw business away from the central business district.

But based on the designs, the overhauled street-level row of stores of the church’s owned properties will soon house a Starbucks shop, a Red Ribbon store, a front-end Jollibee fast food restaurant, and outlets of “Mang Inasal,” “Andok’s,” and ChowKing.

These stores would accompany homegrown enterprises like “Steaks and Toppings” and “Don Henrico’s” pizza parlor.

The church’s basic goal is to bring back foot traffic to downtown Session, for which many of the road’s old time entrepreneurs have pined.

The Catholic Vicariate of Baguio owns the hill where the cathedral now stands, and the surrounding properties that make up the first block of buildings on Session Road.

A local building, which housed the former D&S grocery, used to stand beside Patria until it was gutted by fire in the 1980s.

Shortly after the 1990 Luzon earthquake struck Baguio City, the church began to develop the empty space vacated by D&S grocery. Government engineers suggested building a wall to reinforce portions of the Cathedral Hill, which began to erode due to the quake.

Instead of a wall, the church developed the Puso ng Baguio as the vicariate’s first multilevel building venture. It was raised by a developer, which operated it under a build-operate-transfer scheme that lapsed in 2009. The church has reacquired control over the building.

“The income that came from these establishments supported the pastoral programs and works of [the Catholic Vicariates of] Baguio-Benguet, Bontoc-Lagawe and Tabuk,” Abela says.

He says the church decided to overhaul Puso ng Baguio to “uplift the building’s image,” given its prominence in downtown Session.

Patria de Baguio has been modernized and is now host to popular restaurants.

Aside from the street-level row of eateries, the new Puso ng Baguio wing of Porta Vaga will host a row of dry goods stores on the second floor, and small schools on the third floor, Abela says.

“We are planning to have restaurants on the fourth floor. This [level] overlooks Session Road,” he says.

Abela says the church will regulate the size of the signboards to be posted outside the building. “We recognize that all of these buildings are historical. These are landmarks. Our goal is to minimize the size and volume of signboards to bring back the beauty and appeal of the buildings. We are hoping that the other buildings [in Session Road] will follow suit,” he says.

“But our dream for Session Road is for it to be opened [exclusively] to pedestrians,” he says.