Shopping will never be the same again | Inquirer Business

Shopping will never be the same again 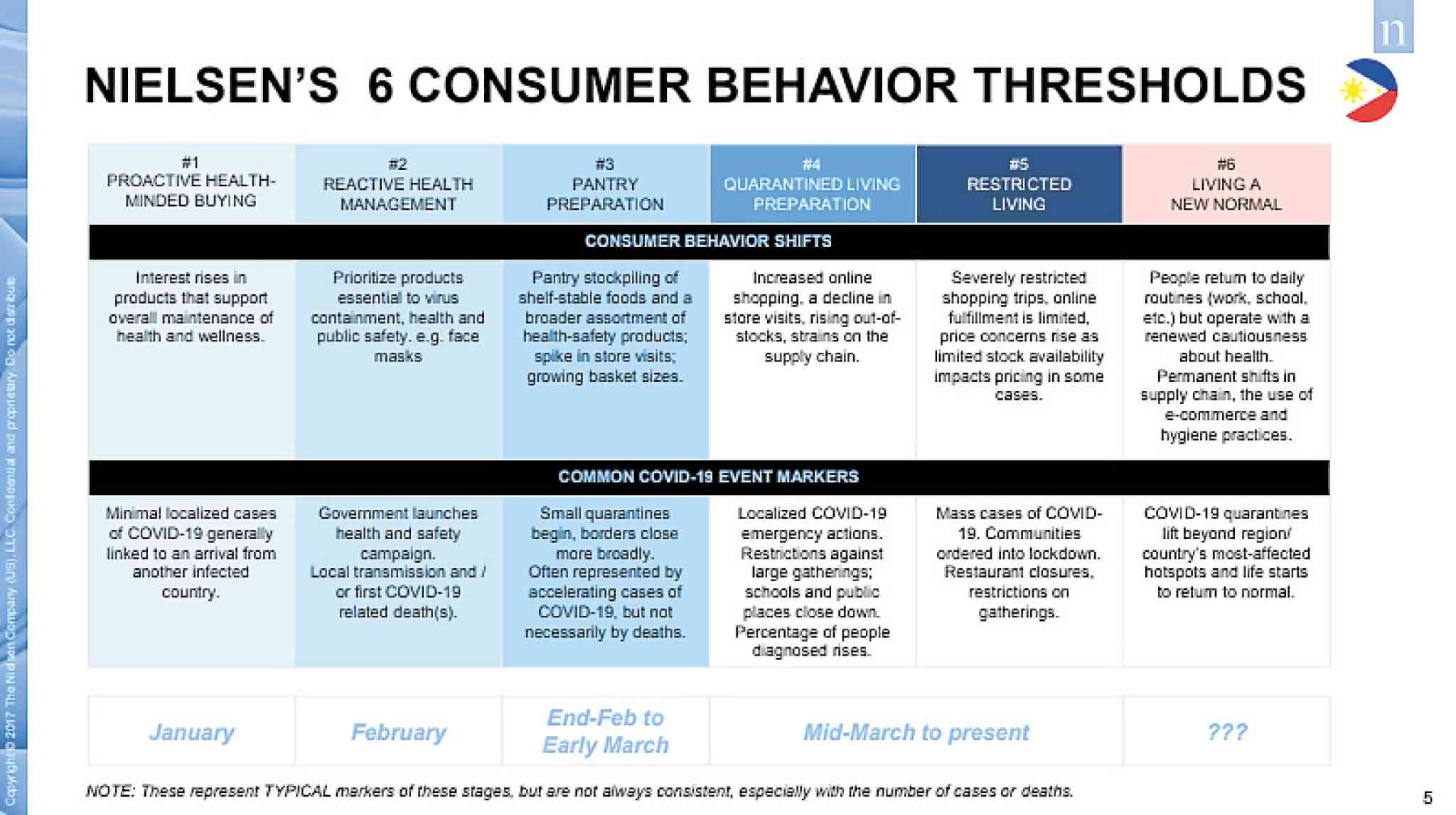 Take a quick look at your kitchen cabinets and pantries and you will likely see increased space devoted to disinfectants, health-based products and food items with a longer shelf life.

And if you think back, you may realize that you have been leaving the supermarket with a bigger haul and adding to your online cart more often than you used to.

These are just some of the changes in consumption behavior and preferences caused by the COVID-19 pandemic, which still has the country firmly in its grip more than seven months since quarantine controls were imposed.

Marketing research firm Nielsen, in a webinar hosted by the Philippine Daily Inquirer, noted that the contagion had influenced changes in Filipinos’ consumption patterns—not only of what they buy but also where they buy.

Nielsen reported that during the height of the pandemic in the second quarter—when the government started imposing stricter quarantines and local lockdowns—about 67 percent of Filipinos cut down on their visits to malls while 17 percent increased their online shopping activities.

There was also a spike in the purchase of alcohol (96 percent), disinfectant air freshener (97 percent) and liquid hand wash (76 percent). Eventually, the same pattern was observed in food items such as canned tuna, corned meat and instant noodles.

While Filipinos’ preference for “survival items” may be slowly easing, Nielsen associate director John Yamsuan said there was one thing that may stick even after this pandemic or during the final threshold level wherein we enter the new normal—our use of e-commerce.

“We saw this transition from bricks to clicks, or Filipinos being more open to e-commerce,” he said. “It will definitely go forward and not just during the pandemic. We know from data that this is going to be part of the consumers moving on to the new normal.”

According to Yamsuan, one of the factors for this may be the Philippines’ imposition of one of the longest quarantine periods, which forced a lot of Filipinos to stay home.

“If the source of the change is deep-seated in a consumer or individual, it definitely will be carried forward as we move on to the future. This is something that we can expect, to some extent even in businesses,” he said. 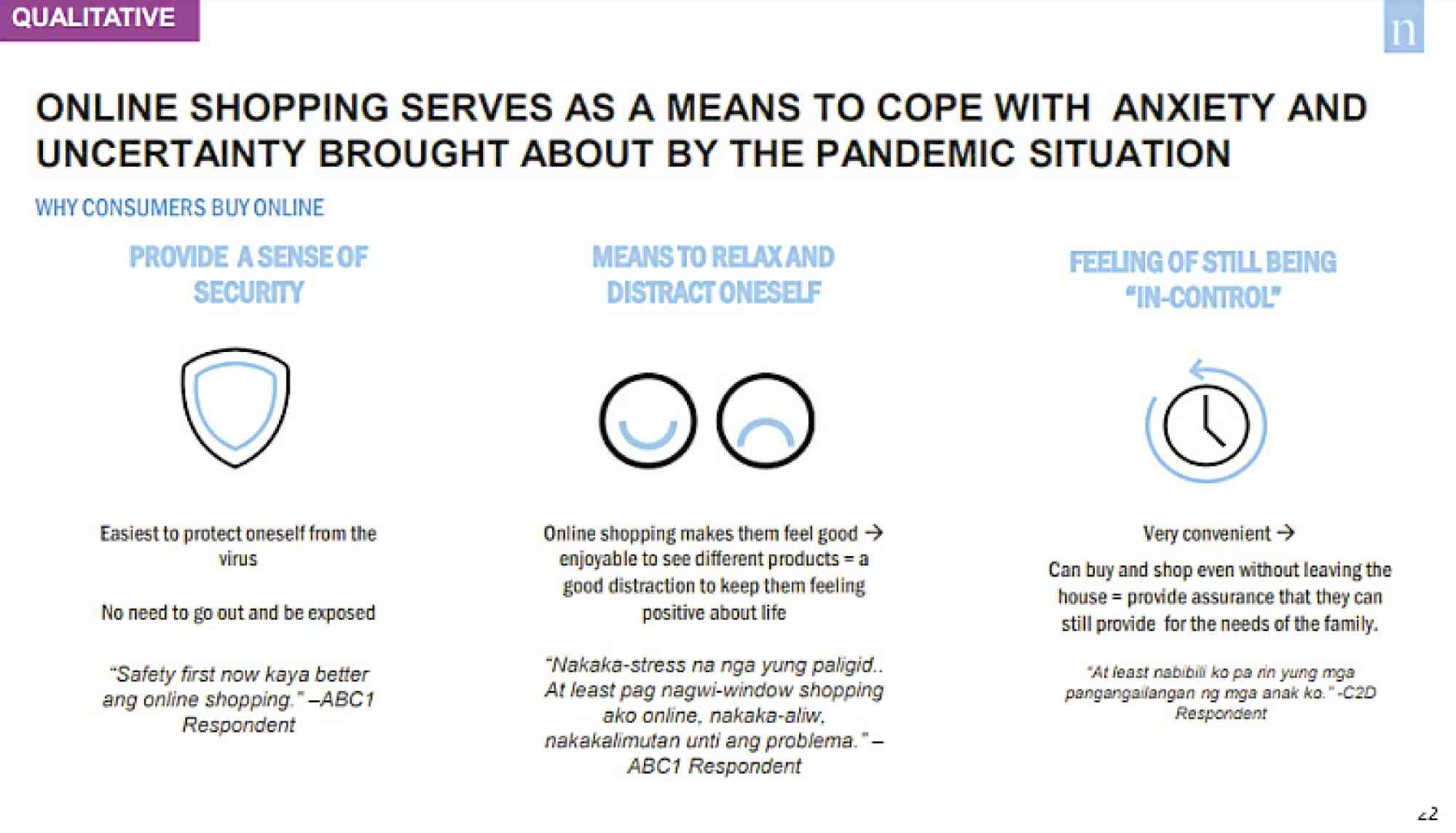 Beginning March this year, Nielsen saw about 1.5 million new online shoppers in the Philippines, most of whom belonged to the working class and are males. Compared to last year, however, there were also more first-time online buyers from the nonworking segment.

“There is a shift in purchase channels,” Yamsuan said. “The Philippines has been registering a steady growth in e-commerce year-on-year. Digitalization is going to be part of the new normal.”

Nielsen said online shopping also became an instrument for a lot of Filipinos to cope with the anxiety brought about by the pandemic. For a lot of consumers, it provided “a sense of security,” “a means to relax and distract oneself,” and still have the feeling “of being in control.”

More than the emotional and mental benefits, the research firm stressed the convenience it brought to a lot of people.

Aside from avoiding the nuisance of traffic, finding a parking space, and the long queues at the cashier, online shopping offers various payment options, cheaper and hard-to-find items, and an emerging number of legitimate sellers.

But this doesn’t mean that we’ll see the exodus of brick-and-mortar stores.

“From our studies, we see physical stores slowly recovering, coming out from the more lenient quarantine degrees that the government is imposing, but we’ve seen that even with their recovery, e-commerce is still growing. It tells us that consumers are still going back to physical stores. It’s not a case of one replacing another,” he said.

“It’s not going to happen, at least not in the very near future. The demand for physical stores may slow down because of the current protocols but we don’t think physical channels will be replaced by e-commerce,” he added.

All of these analyses may help businesses figure out how to move forward. Ultimately, the executive has one piece of advice for industry players.

“Invest in innovation and technology. But these two should be anchored to something, and that’s consumers. If we are able to anchor the needs and wants of consumers, our initiatives for digitalization will definitely be guided,” he said.