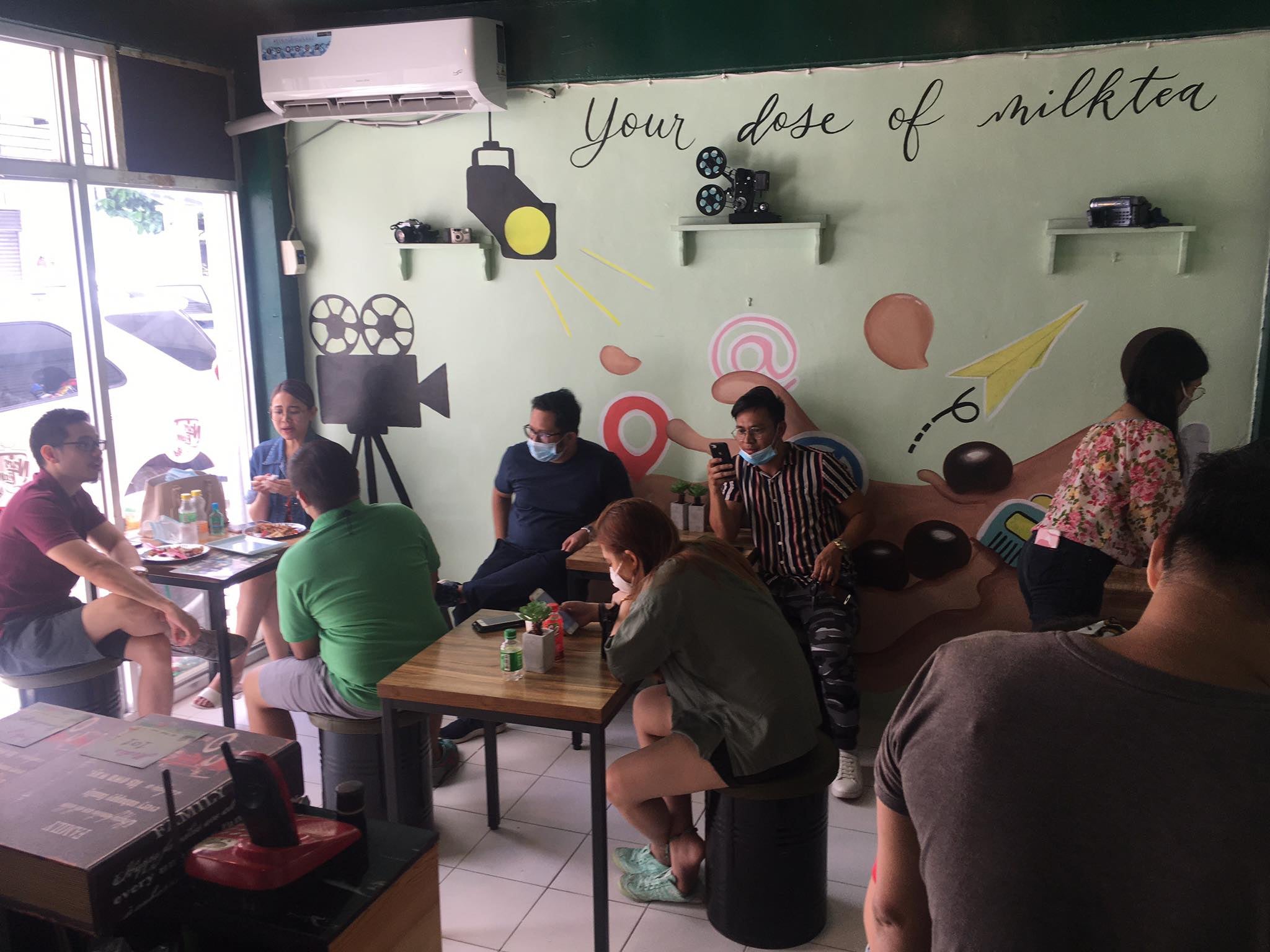 The decor inside News TeaM speaks of the love for broadcast news by its owners. —CARINE ASUTILLA-LAPID/INQUIRER VISAYAS

LILOAN, Cebu— It is said that when life gives you lemons, make lemonade. But in the case of these three retrenched reporters, they decided to make milk tea.

Joworski Alipon, Annie Perez and Jude Torres have embarked on a milk tea business following the closure of the regional stations of ABS-CBN after Congress thumbed down the renewal of its franchise. They recently opened their milk tea shop in Barangay Tayud, in this northern town, which they named News TeaM.

Their business speaks of their love for news and where they came from.

The store logo features a caricature of a television set with color bars along with the milk tea in a plastic cup.

Painted on the wall inside the store are TV cameras and reels. Displayed on each corner are old video cameras.

And it is not just milk tea that they serve: They also provide a dose of news on their Facebook page as well as a note containing news tidbits and trivia along with the deliveries.

“It will always be in our blood that we are journalists and we owe it to our customers to keep them updated while they sip their milk teas,” said Perez.

She also considered providing news to customers as a unique selling point.

But she admitted that at the back of their minds, they still want to continue practicing the profession that they love.

Indeed, Perez, Alipon and Torres—all in their 20s—were dedicated reporters who never turned down an assignment even when Cebu started closing down its borders last March due to the new coronavirus pandemic.

While half of the workforce worked from home, the three along with their cameramen were studio-based reporters who went on fieldwork.

The three would gulp down milk teas to destress, especially after crunch time.

When ABS-CBN announced the retrenchment last July, Torres, Perez and Alipon comforted each other while mulling over how to earn a living.

“Since we love milk tea and we think that pursuing what you love is a better idea, we started looking for people who could guide us through it and there, the rest is history,” Torres said.

Alipon said that while they had job offers, they could not imagine working with another company apart from ABS-CBN.

“The Kapamilya spirit is so alive. Even after the retrenchment, we are each other’s medicine against depression. We owe our career and personal growth to our company,” he added. 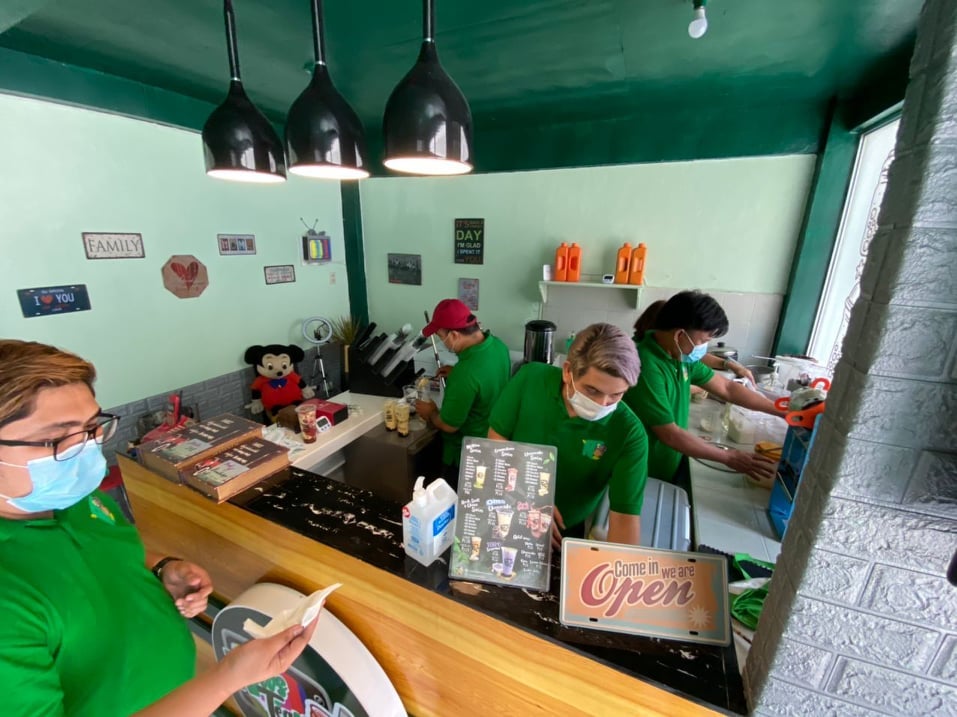 The three, along with Chris Villocido, TV Patrol Central Visayas (TVPCV) graphic artist, underwent a one-month training on milk tea business and all its intricacies.

Using a portion of their separation pay as start up capital, they first put up a take-out outlet in Alipon’s house in Consolacion town, northern Cebu.

They then put up a Facebok page with the same name where their customers could order online for deliveries.

The orders are delivered by security guards of ABS-CBN regional station in Barangay Jagobiao, Mandaue City who could no longer go on overtime following the closure of TVPCV.

“We are thankful for this opportunity because currently, overtime is not allowed at work, which means that we cannot earn extra,” said security guard Rey Pelingon who called their group “Kuya Guards.” Aside from the News TeaM, they are also tapped to deliver the orders from the online store put up by other retrenched ABS-CBN Cebu employees.

According to Neda Esguerra, former Marketing and Events head for ABS-CBN Central and Eastern Visayas, K Tindahan is one way of uplifting each other after losing a job.

“We find it fitting to support each other because that is exactly how we want to move on– by supporting each other until we are all better. Who knows where this support system will bring us but it doesn’t matter. What matters is that right at this very moment that we need love and support, we are still there for one another just like before,” said Esguerra.

The people behind K Tindahan and News TeaM pooled their resources to buy accident and health insurance to protect the Kuya Guards while on delivery.

“We are glad to be working with the former Kapamilya employees. They were good to us before, and they remain that way to us,” said Pelingon.

In the case of the News TeaM, the rising number of customers prompted Torres, Alipon and Perez to rent space in a commercial complex next to a public market to accommodate dine-in costumers while continuing their deliveries.

Torres and Alipon work full-time in their milk tea station while Villocido and his girlfriend, Tiffany Madelo, as well as former cameraman Dacky Bulotano serve as bartenders.

Perez, who teaches at the University of the Philippines Cebu, supervises the supplies and finances of the shop.

“I can juggle teaching through distance learning in the day and at the milk tea shop by night or whenever I don’t have synchronous classes. There is no more pressure of beating deadlines and chasing sources but a different kind of pressure, to give the customers new offerings from time to time,” she added.

As these former ABS-CBN Cebu employees are trying to move forward, they continue to hope that the company they consider their second family will reopen its doors and take them in again.