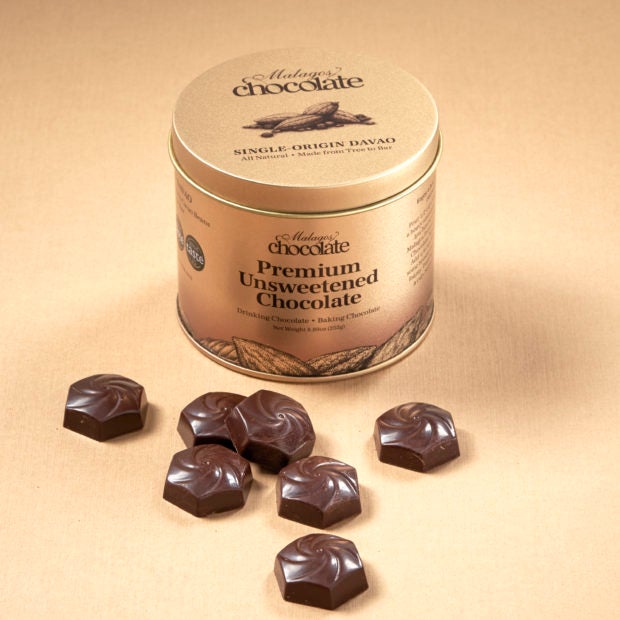 Malagos Chocolate claimed four Gold awards at the World Drinking Chocolate Competition 2020 in Hannover, Germany. The Davao-based chocolate manufacturer was given the top prize, receiving the Gold award in the Plain/Origin Drinking Chocolate Dark (made with water) category, besting entries from all over the world.

It was also given three Golds in Special Awards categories: Growing Country, Chocolate Maker and Direct Traded. In addition, Malagos Chocolate also won a Bronze in the made-with-milk category of the Plain/Origin Drinking Chocolate Dark category. The results were announced last October 25 during the virtual Schokoladen Gourmet Festival.

The award-winning entry was Malagos Chocolate’s 100% Premium Unsweetened Chocolate.  It is the purest of all of the Davao-based company’s products and contains only one ingredient, the fermented dried cacao bean.

Rex Puentespina, managing director of Malagos Chocolate, was overwhelmed with the unprecedented sweep by a Filipino-made chocolate product. “It goes to show that our chocolate is world-class.  Makes you proud to be a cacao grower,” he said.

On top of the recognition for the quality of its drinking chocolate, Malagos Chocolate’s victory in the Special Awards Category also reaffirmed the Filipino company’s commitment to championing Philippine cacao.

It was awarded Gold in categories that emphasize the integrity of its products. The Gold Growing Country award is given to chocolate completely produced and packaged in a recognized cacao-growing country, has qualified in the Grand Jury round, and has at least 10 products from the country entered into the category.

The Gold Chocolate Maker award is given to a product fully made from cacao beans into finished chocolate in the entering company’s own factory.

The Gold Directly Traded is given to chocolate made from cacao with no middlemen involved, with as few steps as possible in chain, and where the chocolate maker has direct contact with the grower.

Malagos Chocolate sources its beans from its own farm, the Puentespina Farm and several small farmers surrounding its facilities in Davao. Its operations started only in 2012, but thanks to investments in training and world-class drying and fermentation technologies, it went on to become the most-awarded Filipino chocolate brand to date. Its farm has been designated a producer of heirloom cacao – one of only 16 in the world – and its beans have been named one of the top 50 in the world.

Puentespina shared that the company continuously tries to find ways to improve on their chocolate. “Our hard work paid off.  Last year, we revisited and made some improvements on our original fermentation protocols, and that  made a lot of difference.  It brought out the excellent qualities that are inherent in our beans,” he said.

“This is a validation of our never-ending quest for excellence in the field of cacao farming and chocolate-making,” he said. “I thank the whole team — Puentespina Farm, Malagos Cacao Development Center, Malagos Garden Resort, Malagos Chocolate, and the whole Puentespina family for their support.

“We share and dedicate this award to the hard-working Filipino farmer. May this award uplift our spirits in these very difficult times. Mabuhay ang produktong Pilipino!”

Let history be the judge