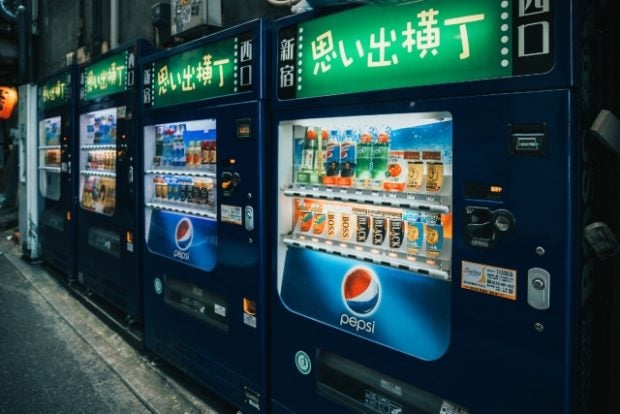 In Japan, there is approximately one vending machine for every 23 people. Image: IStock/Marco_Piunti via AFP Relaxnews.

Japan is home to some 126.5 million people, as well as approximately one vending machine for every 23 inhabitants. These impressive machines — found here, there and everywhere — are something of an institution, as much in the day-to-day lives of the country’s “salarymen” as they are on the tourist trail.

However, the COVID-19 pandemic has made vending machines less essential, so much so that monthly sales of drinks dropped by over 35% earlier this year. But there is no shortage of ideas in the country to help keep this legendary aspect of Japanese culture alive.

Whether on a street corner, at the subway exit, on a train platform or in a dead-end alley, drink vending machines are as much a feature of the urban landscape in Japanese cities as Shinto shrines. Often a mundane fixture, frequently plagued by vandalism in Europe or the United States, these impressive white, blue and red machines are an integral part of fast-paced Tokyo life, where workers can grab a an iced or hot coffee, a Coca-Cola or a sake as they leave the office.

In Japan, there are many more of these large iron automats than typically found in Western cities. In fact, there is approximately one for every 23 people in the country, according to the Japan Vending Machine Manufacturers Association. Annual sales from the machines total around $60 million (approx. P2.9 billion).

Japan’s vending machines are known for the sheer variety of soups and drinks they sell, from yuzu fruit juice, energy drinks and grape Fanta to vitamin-rich Minute Maid, hot and iced coffee, sake and beer. They are often stocked with limited editions or flavors not carried by supermarkets, let alone the famous 24-hour konbini convenience stores. With blue labels for cold drinks and red labels for hot, all you need is a 100-yen coin to start your own collection of cans or bottles. In fact, for tourists visiting the country, deciphering the contents of a vending machine to hunt down new flavors is as much of a must-do as an evening in a Japanese amusement arcade.

The end of an era?

Since the pandemic hit, these familiar fixtures of Japanese life have started stocking new kinds of products, with some automats now selling masks and antibacterial wipes. It is a far cry from the carefree days of being able to grab a hamburger or a cup of noodle soup from a vending machine. According to Inryo Soken data, published by Bloomberg, monthly sales of beverages in the country’s vending machines dropped by over 35% earlier this year. In fact, they dropped by 37% in the month of May alone, while beverage sales in convenience stores were down 21%.

Last August, the drop in sales was still estimated at -13%. With lockdown restrictions, there were simply fewer people out and about in the streets walking past these machines. Tourists are also absent, given the travel restrictions in place, so they can no longer “play” at hunting down the most unusual drinks. Could the pandemic bring about the end of an era for this legendary part of Japan’s urban landscape?

The Japanese drinks mastodon DyDo Group Holdings Inc, which gets more than 80% of its revenue from the sale of drinks in vending machines, plans to invest six billion yen (approx. $56.7 million or P2.7 billion) in 2021 to help bring them back into the post-COVID era. Potential ideas being floated for the future of the machines includes transforming them into mini data centers or connecting the vending machines to the internet to offer private storage space for individuals. The vending machines could even become weather stations or earthquake monitoring stations.

In response to the pandemic, DyDo has already developed a machine that uses a pedal rather than push buttons to make selections. CC