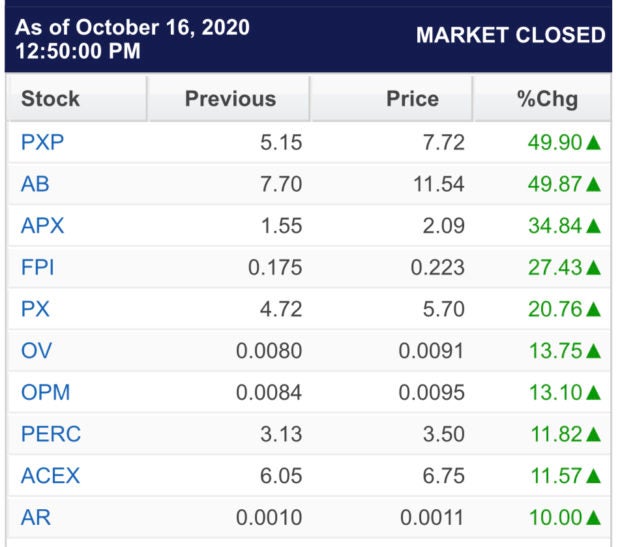 President Rodrigo Duterte’s go-signal to resume oil and gas exploration in West Philippine Sea has perked up investor appetite on mining/oil stocks with stake in service contracts disrupted by the territorial dispute between the Philippines and China in the last six years.

The biggest beneficiaries of the renewed oil exploration play were PXP Energy Corp. (PXP) and Atok Big Wedge, whose shares surged by nearly 50 percent on Friday.

Apex Mining gained 34.84 percent and was the day’s most actively traded company.

“We can only surmise that the unusual price movement can be attributed to the government’s announcement that President Duterte has lifted the moratorium of oil and sea exploration in the West Philippine Sea…” Atok Big Wedge said in a disclosure to Philippine Stock Exchange on Friday.

Energy Secretary Alfonso Cusi has given the “resume to work” notice to contractors doing petroleum exploration in the service contracts (SC) 59, 72 and 75.

Atok Big Wedge’s subsidiary Tidemark Holdings Ltd. has a 20 percent in UK-based Forum Energy Ltd., which in turn has 70 percent economic interest in SC72, which is situated offshore west of Palawan Island and is host to the Sampaguita offshore gas discovery. Drilling in the area had been placed on hold by the Philippine government in 2014, under the term of then President Benigno Aquino, pending the resolution of territorial sovereign disputes.