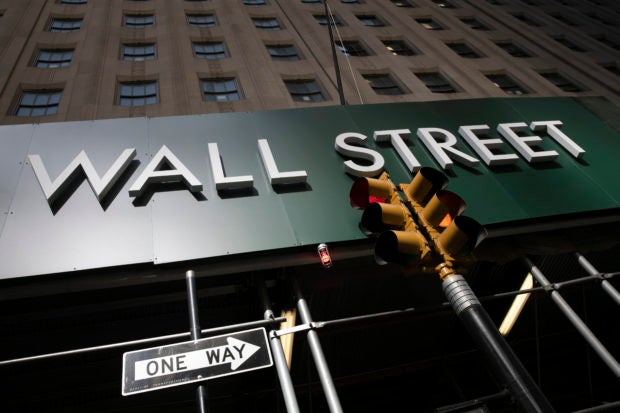 FILE -In this June 16, 2020 file photo, a sign for a Wall Street building is shown in New York. Stocks are opening mostly lower on Wall Street Thursday, Aug. 13, a day after the S&P 500 closed just below its pre-pandemic record high. (AP Photo/Mark Lennihan, File)

Paris suffered a drop of more than 2.0 percent after the French government announced a curfew for the capital and eight other cities — covering almost a third of the country’s population — for as long as six weeks.

And Frankfurt stocks lost 2.5 percent after Germany also ramped up Covid-19 restrictions, while the EU’s disease control agency labeled more than half of the bloc’s member states as red zones in a new map to guide countries’ decisions on travel restrictions.

“Dealers are dumping stocks for fear that economic activity will drop off because of the tighter restrictions in various parts of Europe,” said CMC Markets analyst David Madden.

“The latest restrictions are likely to hamper Europe’s economic recovery — which was already running out of steam before the health woes ramped up again.”

Across the Atlantic, the Dow fell 0.1 percent and the tech heavy Nasdaq slumped half a percentage point amid a slew of unwelcome news.

Labor Department data showed new applications for US jobless benefits rose to a seven-week high of 898,000 last week, an increase of 53,000.

That was the sharpest rise in seasonally-adjusted initial claims in two months as the United States attempts to recover from mass layoffs caused by virus-related business shutdowns earlier this year.

The deadlock over additional US stimulus spending was also set to continue, with Treasury Secretary Steven Mnuchin saying a deal is unlikely before the November 3 election.

The pound fell as EU leaders met to discuss post-Brexit trade talks, with Prime Minister Boris Johnson urging them to give ground or see Britain walk away with no deal, while oil prices also struggled.

Equities have been benefiting in recent weeks from investors’ belief Republicans and Democrats will eventually reach a deal on another package of measures to support the US economy.

But this week’s worsening news has taken a toll, with the Dow closing lower the last three sessions.

Analysts said traders are taking comfort from the possibility that Joe Biden and the Democrats will win the presidency and both houses of Congress in the election, paving the way for a bigger stimulus than anything that could be agreed before the vote.