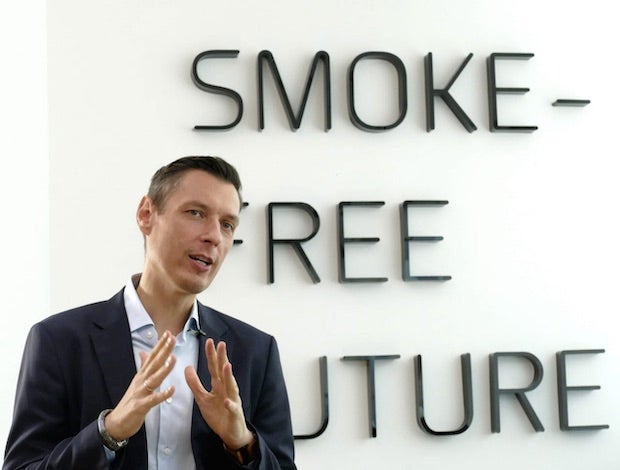 Denis Gorkun, president of PMFTC Inc., the Philippines’ largest cigarette maker, talks about a smoke-free future at the DigiCon Omni 2020.

MANILA, Philippines — Denis Gorkun, president of PMFTC Inc., highlighted on Monday the commitment of the Philippines’ leading cigarette maker to “delivering a smoke-free future,” which is in fact the slogan of its parent company, Philip Morris International.

“There has never been such a dramatic paradigm shift at such a major organization. We are doing so much more than just evolving from an agriculture and consumer goods company to a technology company. We are a company that needs to transform in order to be successful in the new smoke-free reality,” Gorkun stressed in his talk at the opening of DigiCon Omni 2020, a five-day virtual conference hosted this year in the Philippines.

“We are going smoke-free because it is the right thing to do, and our resources allow for it,” he went on. “With the support of top-in-class scientists, engineers, technicians, and a state-of-the-art Rand D, our bold vision is to transform our business, to replace cigarettes at the soonest possible time. To take the smoke out of smoking.”

The result of that effort is IQOS, an electronic cigarette that heats rather than burns tobacco, which is sold in the form of sticks under the brand HEETS.

The newly patented technology has been recognized by the US Food and Drug Administration as “fundamentally different” from combustible cigarettes, according to a PMFTC statement issued on Tuesday,

In other words, because it merely heats real tobacco, it produces “no smoke, no fire, and no ash” — only vapor.

“It has been authorized to be marketed in the US under a modified exposure order, which is deemed appropriate for the ‘promotion of public health’ and is ‘expected to benefit the health of the population,” the statement said.

Gorkun warned users, however, this smoke-free alternative to cigarettes was not risk-free. The best thing for smokers, he said, would be to quit and for nonsmokers not to start all.

But he cited estimates by the World Health Organization (WHO) showing that there would still be more than a billion smokers in 2030.

In the Philippines, the quit rate was at 4 percent, and yet there are 16 million smokers — despite rigorous regulations implemented by the government.

“What of the billion smokers who will continue to smoke then? With today’s science and innovation, there must be another, a better way, right?” Gorkun said.

“For our company, the answer is clear: We need to innovate, and innovate responsibly. By doing something that sounds easy in theory but is much more difficult in practice. And that is to take the smoke out of smoking,” he added.

So PMI invested $7 billion in research and development, hiring over 400 scientific experts. The result was 5,800 patents granted as of 2019. The team produced hundreds of studies that were peer reviewed or are in the process of being peer reviewed.

“This is a testament to our commitment to put science at the forefront as we continue on our quest. It also is a manifestation of our company’s conviction that responsible innovation through science and data overcome problems and result in solutions that work for our consumers,” Gorkun said.

He then went on to cite the global success of IQOS, which had become available in 57 countries. In just five years, he said, IQOS users had grown to 15 million globally, with 72% converting fully to IQOS.

“And we’re excited by the fact that our research tells us 59 percent of Filipino smokers are open to trying smoke-free alternatives as long as they are commercially available and subject to certain product safety standards,” he added.

That, he concluded, would “bring us closer to our dream of a smoke-free Philippines.”