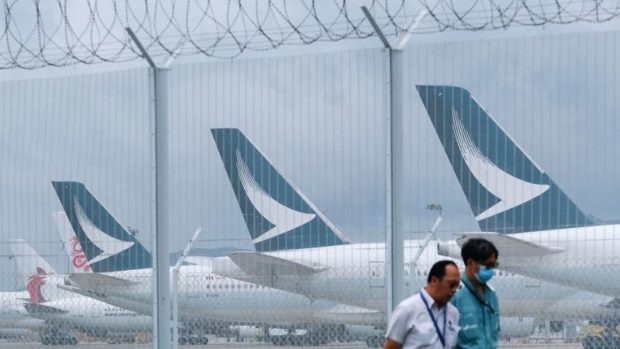 Aircraft operated by Cathay Pacific Airways are seen through a barbed-wire fence as they stand parked on the tarmac at Hong Kong International Airport in Hong Kong, on June 9, 2020. ROY LIU/China Daily/Asia News Network

BEIJING — Cathay Pacific faces a long, bumpy ride ahead before it can end an “unsustainable” level of cash burn, its CEO told China Daily.

The embattled carrier suffers from a net cash outflow of up to HK$2 billion each month to support its sagging business, which Cathay Pacific CEO Augustus Tang Kin-wing described as “unsustainable” in an interview.

According to Tang, Hong Kong’s flagship airline now carries only 1,500 passengers per day, compared with 100,000 “in any previous normal year”.

“The cash burn will continue to be significant until the number of passengers return to a certain level,” said Tang, adding that he doesn’t have a target for the passenger numbers.

Tang, who took the helm at the company in August last year, does not envision an industry-wide recovery until an effective vaccine “has been proven and made widely available and acceptable”.

“Before that condition is reached, the demand for air travel will probably be just suppressed. Once an effective vaccine becomes widely available, however, I think the demand will be tempered initially. Over a longer period of time, there will still be growth, but the growth may not be as strong as before,” Tang warned.

The Cathay Pacific Group is undergoing a strategic review to restructure its hard-hit business. Recommendations are due to be presented to the board in the fourth quarter on the “size and shape” of the company to ensure the group’s continued survival. Tang didn’t reveal any details.

Since it will take time for the aviation market to recover, Tang said a net cash outflow will continue in the short term even after the “restructuring of business” has been completed.

“The general top-level plans include bold moves to improve our overall competitiveness and cost efficiency, enable us to provide a stronger, more competitive offering, and the inevitable rationalization of the routes and right-sizing of the airlines,” he noted.

The overarching goal, Tang added, is to ensure its “extreme competitiveness” in what he described as “the new travel industry”.

The Cathay Pacific Group announced in mid-September it would not apply for further government employment subsidies for its main business units, freeing up its ability to make major job cuts at Cathay Pacific and Cathay Dragon.

Cathay, which received a US$5 billion rescue package led by the Hong Kong government in June, applied for the first tranche of the wage subsidy scheme from June to August. Cathay Pacific received more than HK$458 million for its 17,703 employees while Cathay Dragon received HK$69.08 million for its 2,581 employees.

Tang didn’t respond to the possibility of job cuts as part of the airline’s restructuring.

The 74-year-old airline cut its operating passenger flight capacity to nearly 10 percent in September, with a similar level in October.

As many as 72 planes – or 40 percent of the airline group’s fleet – will be parked outside Hong Kong, as only a small part of the flight business will continue to be operated “in the foreseeable future”.

Qatar Airways, the third-largest shareholder in Cathay Pacific, said on Sunday it received US$2 billion in state aid to weather the pandemic, after it posted a net loss of US$1.92 billion for the year ending March 31 in one of its “most difficult years”.