Asia shares up ahead of China holiday, presidential debate 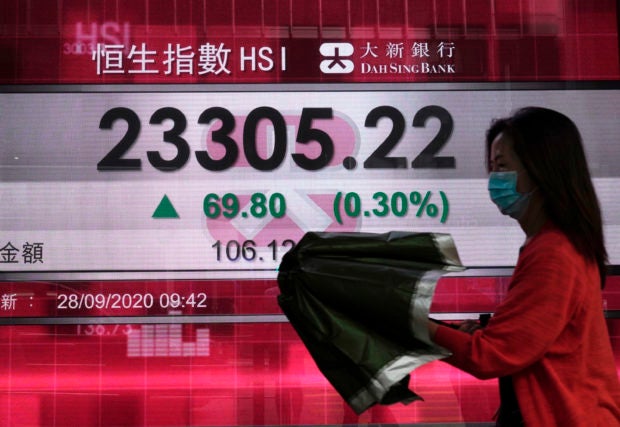 A woman wearing face mask walks past a bank’s electronic board showing the Hong Kong share index in Hong Kong, Monday, Sept. 28, 2020. Asian shares were mostly higher in muted trading Monday, ahead of the first U.S. presidential debate and a national holiday in China later in the week.(AP Photo/Vincent Yu)

TOKYO — Asian shares were mostly higher in muted trading Monday, ahead of the first U.S. presidential debate and a national holiday in China later in the week.

China is celebrating Mid-Autumn Day Oct. 1, followed by a weeklong holiday through Oct. 8.

China’s statistical bureau reported Sunday that industrial profits rose 19% in August from a year earlier, as the economy recovered from the pandemic downturn.

Regional markets are seeing signs of improvement in economic activity despite the coronavirus pandemic, as businesses strive to achieve a new normal with social distancing and mask-wearing.

Investors are hoping for additional fiscal stimulus measures from the U.S. House Speaker Nancy Pelosi has said she hopes to find common ground for agreement with Treasury Secretary Stephen Mnuchin after the $2.4 trillion package under discussion failed to bridge the divide.

The chamber passed a $3.4 trillion rescue measure in May. Democrats cut their ambitions back by $1 trillion or so, while Senate Republicans have focused on a much smaller package in the $650 billion to $1 trillion range.

Bridging the overall topline gulf would be tough. Working out hundreds of legislative details just before the November election, amid a feud over filling Justice Ruth Bader Ginsburg’s seat on the Supreme Court could be impossible. But there is pressure on both sides to do something to help the economy and the tens of millions of voters left unemployed thanks to the pandemic.

Also on investors’ minds is the first presidential debate, set for Tuesday, between U.S. President Donald Trump and Democratic candidate Joe Biden. It could influence the course of U.S. policies likely to affect share prices across the board.

“Heightened volatility appeared to have been the case as growth and U.S. election concerns mounted,” said Jingyi Pan, market strategist with IG in Singapore.

The S&P 500 rose 1.6% to 3,298.46, flip-flopping between small gains and losses a few times in the early going. Stocks have been erratic this month, with indexes setting new highs to start the month and then falling sharply as investors worried that values for some of technology giants had risen too high.

In energy trading, U.S. benchmark crude slipped 15 cents to $40.10 a barrel in electronic trading on the New York Mercantile Exchange. Brent crude, the international standard, lost 14 cents to $41.78 a barrel.