SEOUL — Kim Eun-hee wants to complete her collection of memorabilia of Korean boy band BTS by bidding more than $120,000 to buy shares in the group’s music label Big Hit Entertainment in South Korea’s hottest IPO, which could even shake money markets.

Fervor is building among die-hard South Korean BTS fans to secure at least one share of the K-pop band’s label as order books for next month’s listing opened this week.

“I’m adding my support to BTS by buying shares; it will add onto my collection here,” the 51 year-old said in the BTS-themed cafe she runs in Seoul, which is filled with BTS merchandise, from a 47-inch wide photo of band member Jin to toys designed by the group.

Big Hit Entertainment is betting that going public will be a smash hit riding on the success of the seven-member band, which has become the first South Korean group to reach No. 1 on the US Billboard Hot 100 singles chart with catchy song “Dynamite.”

There is already insatiable demand for new share listings from South Korean retail investors — known as “Ants” — because government stimulus efforts to bolster the economy after the coronavirus crisis has flooded markets with cash.

‘Biggest fish of the year’

Analysts predict Big Hit will take the crown as South Korea’s hottest initial public offering (IPO), one that the central bank is watching closely as a massive oversubscription for shares could send ripples through short-term money markets.

“Gross bids from retail investors could hit 100 trillion won ($85.23 billion), it’s the biggest fish of the year,” said Hwang Hyun-jun, an analyst at DB Financial Investment. “Liquidity party is still on, and the timing couldn’t be better as BTS has just topped the Billboard.”

Big Hit is looking to raise as much as 962.6 billion won ($825.9 million) in the IPO that is set to be South Korea’s largest in three years.

The offering of about 7.1 million new shares is currently pegged at 105,000 to 135,000 won per share. The final price maybe announced early next week or late Friday afternoon. 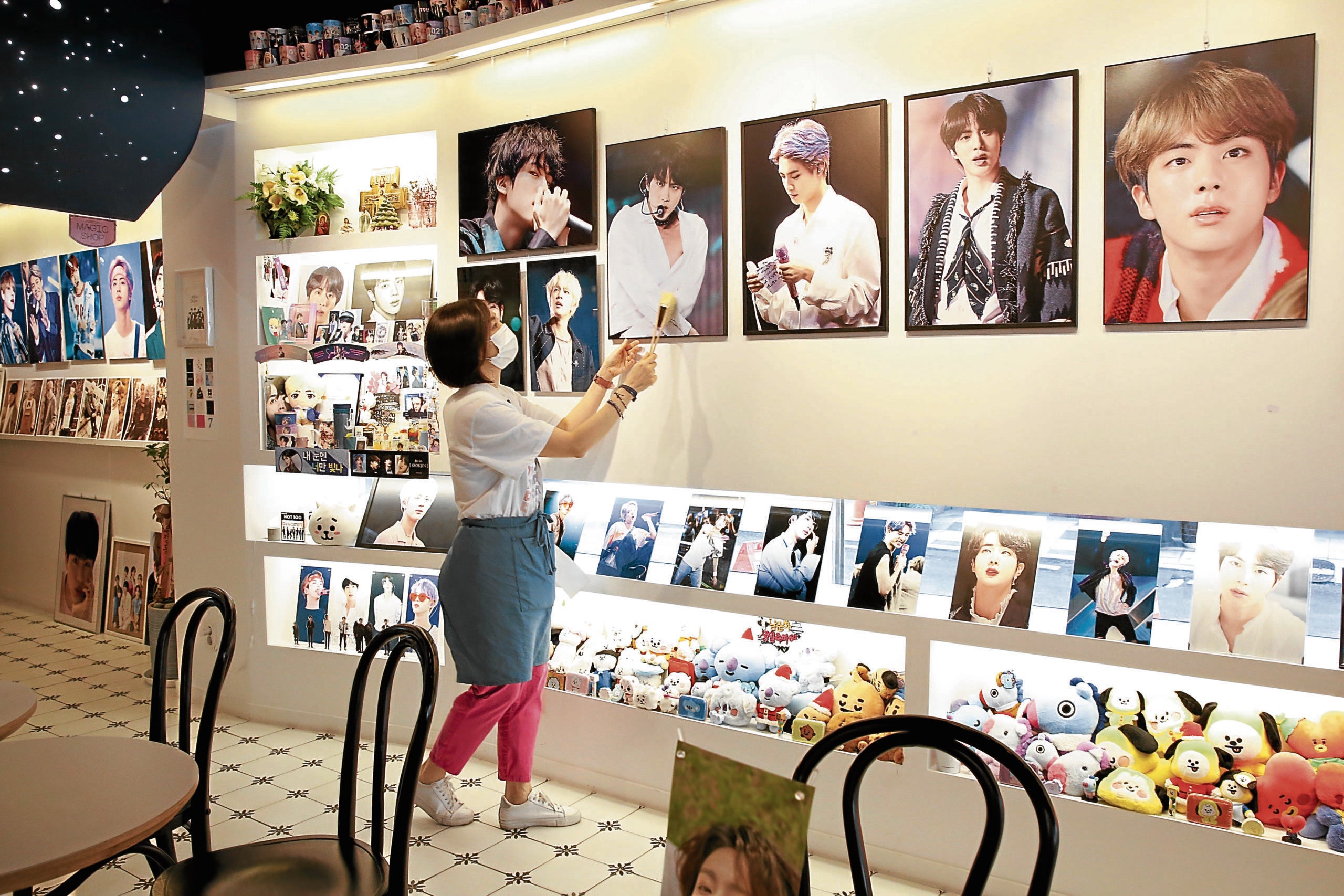 ‘ARMY’ BASE Kim Eun-hee, who runs a BTS-themed cafe in Seoul, is among fans of the K-pop boy band hoping to buy shares from their music label, Big Hit Entertainment, whose upcoming initial public offering is said to be South Korea’s largest in three years. —REUTERS

But the stock’s valuation is less of an issue for Kim and other BTS fans — who are called ARMY.

Kim and four other fans bidding for shares said they would be lucky to pick up just one share even if they place bids for tens of thousands of dollars because of the expected strong retail demand.

South Korea’s Ants have been piling in to one IPO after another this year.

The September listing of Kakao Games attracted 58 trillion won in bids from retail investors alone on orders of about 1,500 times the number of shares offered, setting a record.

Following the flood of orders for Kakao Games’ IPO, the overnight repo rate dipped to a three-month low of 0.38 percent on Sept. 3 as brokerages placed hundreds of billions of won in preorder deposits from retail bidders into the market, data from the Korea Securities Depository shows.

A Bank of Korea official said the central bank is currently “monitoring the short-term money market as an inflow of funds is expected in the IPO market.”

The Big Hit listing is also expected to make the seven BTS members multimillionaires, as CEO Bang Si-hyuk in August gave them 68,385 shares each.

Some BTS fans plan to buy Big Hit shares for themselves on band members’ birthdays or other anniversaries.

“I can see myself buying one on V’s birthday,” said Alice Park, referring to one of the band members. Park, a 28-year-old banker, is taking out a personal loan of “a couple of hundred grand” to make a bid.

Not new to K-pop scene

Fans loading up on shares of music labels is not new to the K-pop scene.

Local media has reported that back in 2008, a fan of Girls Generation, an all-female group, bought shares in its label SM Entertainment for 22.5 million won and watched them rise more than 2,700 percent in three years.

Kim Seo-hyeon, a 12-year-old BTS fan in Seoul, has asked her parents to buy her one share so she could meet the members of the band at a future shareholders meeting.

“I don’t know about stock valuations. I know my oppas (BTS band members) are rich but I hope me buying shares make them even richer, so that they can buy something nice to wear, that would make me happy.”