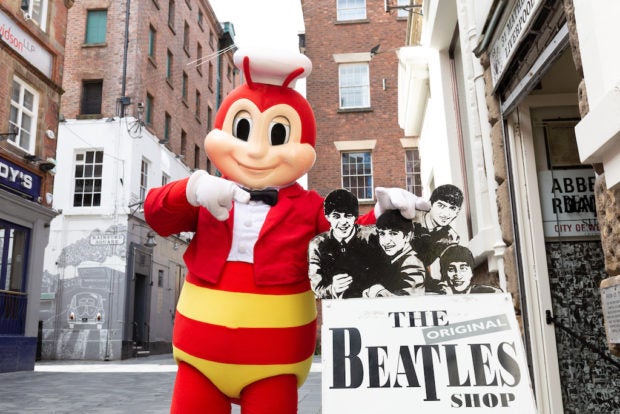 Homegrown fast-food giant Jollibee Foods Corp. has entered the fast-food business in Liverpool, England and Texas, US as part of efforts to woo global consumers despite the challenging environment caused by the coronavirus (COVID19) pandemic.

After the successful opening of its maiden UK store in Earl’s Court, London, Jollibee recently opened its first store in Liverpool, hometown of iconic band The Beatles.

“In Europe, our expansion plans are ongoing. Our next Jollibee store will open in Leicester before the end of 2020, and we remain on track to have 50 restaurants in the next three to five years,” Jollibee Group chief executive officer Ernesto Tanmantiong said in a press statement on Wednesday.

“Our customer base around the world continues to grow as we tap local consumers within each market – expanding it from Filipinos living abroad to a wider, more mainstream market. The Liverpool store is showing how Jollibee is appealing to local communities and not just to Filipinos, and we are grateful for their warm welcome and the love they are showing for our food,” added Tanmantiong.

Jollibee Liverpool’s first customer during its opening on Sept. 3 was a local British blogger who lined up as early as 2 am on opening day, with many other customers following him soon after.

“What is really striking at Liverpool’s opening week was that 40 percent of customers were new to the Jollibee brand, and they were interested to try the food for the first time. This increased to 50 percent by the week after, which speaks to the positive reaction of local Liverpudlians to Jollibee,” said Dennis Flores, president of JFC Europe, Middle East, Asia, and Australia (EMEAA).

“Our Liverpool opening has shown that Jollibee has a great potential to appeal to the local customers in the European market, and not only to Filipinos. Our efforts to reframe the brand in Europe by adapting the store design and communication assets to align better with the local target audience are showing results as seen in the great reception by the locals in Liverpool. We will reach out to them further by opening even more stores in mainstream locations such as Leicester. With the British alone spending €1.2 billion yearly on quick-service chicken, we look forward to further tapping into this huge market,” added Flores.

Meanwhile, the first store in the Greater Dallas and North Texas area, Jollibee’s West Plano store, opened on August 20 to a long line of cars snaking around the store’s driveway to the nearby highway. The first customer lined up to order as early as 6 am even when business hours started at 8 am. Customers from as far as Oklahoma — which is a three-hour drive away from the location — kept coming.

“The strength of our off-premise channels such as drive-through, delivery, and pick-up have allowed us to meet the continued high demand for our products. Our Jollibee location in Scarborough, Canada continues to be one of the top-performing stores in the market on DoorDash, a leading on-demand food delivery platform in North America. Despite the effects of the pandemic, the Jollibee brand’s systemwide sales growth remains positive,” said JFC president for North America Rowel Vijandre.

Jollibee’s store in Dallas marks the brand’s 45th store in the US, while the Liverpool location marks the third in Europe. The brand currently has over 1400 stores across the globe.

In Europe, on top of the existing stores in Milan, London and Liverpool, Jollibee intends to open before the end of the year in Leicester, which is known for its diversity and bright festivals. In North America, it is set to open more stores in California and Canada by yearend.