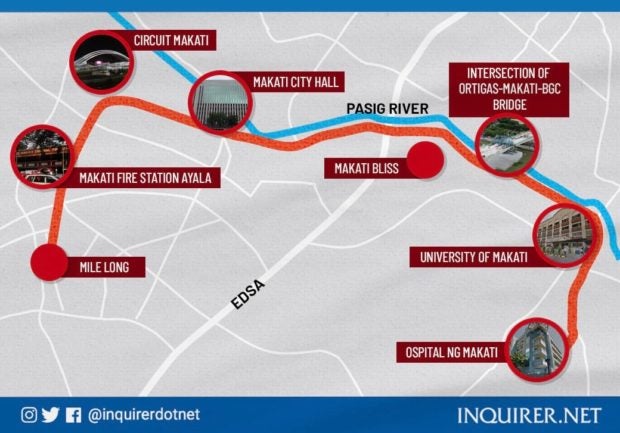 It is the sole subsidiary of China State Construction Engineering Corp. with large construction projects in China and operates out of Iraq, Jordan, United Arab Emirates, Botswana, Vietnam, Brunei and Algeria.

In a text message, Tiu said several Chinese state-owned enterprises had given their intent to undertake the project but noted that China Construction Second Engineering submitted the best terms.

The contract covers civil works alongside mechanical, electrical and plumbing (MEP) works. The civil works alone were valued at $978.6 million while the MEP portion was priced at $234.16 million.

The EPC deal had been executed at the sidelines of the 2020 International Fair for Trade in Services, The Belt and Road and Overseas Projects held in Beijing, China, Infradev disclosed to the Philippine Stock Exchange on Wednesday.

The terms of the EPC contract were made taking into consideration the provisions of the joint-venture agreement dated July 30, 2019, between the company and Makati City.

The proposed Makati subway system was originally targeted to be completed by 2024 or 2025.

The timeline is expected to be adjusted to factor in disruptions caused by the coronavirus pandemic. Tiu said he would update the timeline after the lifting of travel restrictions.

“As you see from the disclosure, cost is getting lower,” Tiu said.

The subway project will have at least eight stations for the first phase, each of which is expected to cost roughly $100 million to build. This suggests that total project cost is now estimated at $2 billion, marking a big reduction from the original project cost of as much as $3.7 billion.

Favorable results of the final soil test alongside cost savings from the slight tweaking of the subway alignment previously brought down the cost to $2.5 billion, including cost of expropriation, demolition and relocation of structures to be affected by the project.

However, there was a further reduction in project cost because two stations along Ayala Avenue were no longer included in the alignment, cutting the length of the first phase to eight kilometers from the previous goal of 10 to 11 kilometers. “Current line is now aligned going to Mile Long for possible expansion either to the airport or to Macapagal Avenue via Buendia,” Tiu added.

The Makati subway project aims to ease traffic bottlenecks within the city, which is home to the country’s premier central business district and hosts a daytime population of 4.5 million. It is also seen to complement the mass transport projects of the national government as it will interconnect with the Metro Railway Transit, the proposed Metro Manila Mega Subway and Pasig River ferry. It also seeks to improve the flood system of Metro Manila, given that good pumping and drainage system will be installed underground.