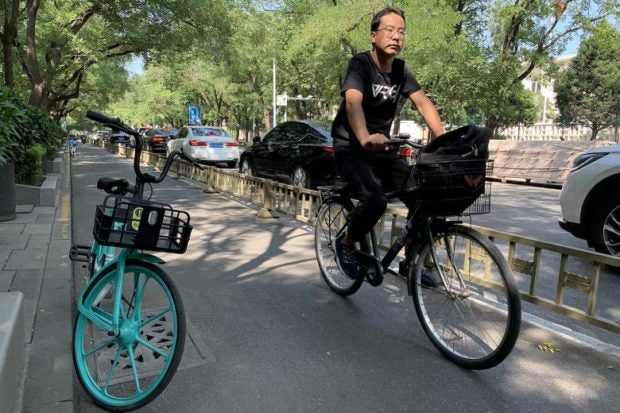 A cyclist in downtown Beijing. Shared bicycle service companies such as Meituan and Hellobike have seen a steady rise in both the frequency and length of trips taken by users. The Straits Times/Asia News Network/DANSON CHEONG

BEIJING — Ms Lin Yinghui begins her work day with a bicycle ride to the office, a short journey across two intersections that takes about 10 minutes.

After work, she cycles home.

The 25-year-old sales executive used to commute by bus or taxi. But worried about placing herself at higher risk of contracting Covid-19, she has switched to using a shared bicycle.

The colorful two-wheelers are an ubiquitous sight in Xianyang, in central Shaanxi province, where she lives, and elsewhere in China.

Ms Lin is one of many Chinese professionals who have switched to more personal modes of transport during the pandemic, which some observers say could persist as a trend, as the country transitions into a post-Covid-19 future.

“During the pandemic, I wanted to choose a mode of travel that would reduce my risk of infection, but after cycling for a while, I realized it’s actually quite convenient. I can leave whenever I want and it’s also a form of exercise,” she said.

Other commuters, like 35-year-old doctor Tang Yao, have also cut down on taking taxis and using ride-hailing services.

“I feel like the space inside the car is quite small so there’s a risk of infection,” said Dr Tang.

He takes the subway – he wears a mask when on board the train – and rides a shared bicycle to his workplace each day.

During the height of the pandemic in China, shared bicycle services offered by companies such as Meituan and Hellobike were touted by the Chinese Centre for Disease Control and Prevention as the mode of transport with the lowest risk of Covid-19 infection.

These firms have seen a steady rise in both the frequency and length of trips taken by users.

A Transport Ministry official said the average distance travelled per trip by shared bicycle has doubled to 3km to 3.7km, from 1.4km to 1.7km before the pandemic, according to Chinese media outlet Caijing in July.

Statistics from the China Association of Automobile Manufacturers show that vehicle sales have risen for five straight months. Last month, they increased 11.3 per cent from a year earlier to 2.18 million units, according to preliminary figures released by the association last Wednesday.

However, subway ridership in Chinese cities has not recovered to pre-pandemic levels.

The China Association of Metros said in a recent report that passenger volume in June in 37 mainland cities was more than 25 per cent lower than a year earlier.

In a study of how Covid-19 will affect urban mobility, which was published in June, the Boston Consulting Group said Chinese respondents of their survey conducted in China, the United States and Western Europe, displayed a “stronger tendency” to rely less on public transit and services like ride-hailing.

Instead, they were drawn to “lowest-risk” modes of transportation such as walking, cycling and driving their own cars.

About 60 per cent of Chinese surveyed said they were more likely to buy a car post-lockdown compared with before the pandemic, citing reasons such as low car ownership rates and cars being seen as a “safe form of transportation”.

Beijing Jiaotong University’s transport analyst Zhao Jian said that while commuters have shown a preference for modes of transport with a low infection risk in the past months, it was still too early to tell if these trends will have a lasting impact in post-pandemic China.

“We are still in the pandemic recovery phase. But the figures we will see in the weeks ahead as schools reopen will be a very important indication (of future trends),” he said.